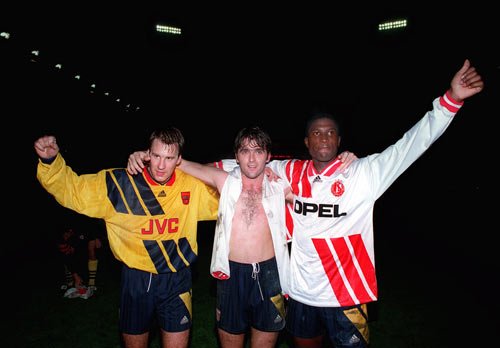 Sorry, a bit delayed, but I have been working all day up till now getting the newly delivered issue of The Gooner in the post to subscribers. However, I am aware that our regulars like to comment on the game before I get the chance to post my thoughts the morning after, so here’s a briefer than normal five talking points ahead of this evening’s visit of Standard Liege in the Europa League…

Defenders, defenders, my kingdom for a defender!
Won’t it be great to see both Bellerin and Tierney starting, alongside Rob Holding in the centre… and presumably Shkodran Mustafi. Hmmm. One has to imagine that Bellerin will not start on Sunday and be given the international break to regain more fitness, which means Calum Chambers may well be rested this evening with a view to a right back start v Bournemouth. So no dream quartet of Bellerin, Chambers, Holding and Tierney (and anyway, there are some that would tell you Chambers is a nightmare at centre back). Still, a backline worth watching.

Ceballos and Ozil in the same starting eleven, again?
Both players started against Watford, although that experiment hasn't been repeated since. However, it could happen this evening, as both players are in need of more game time. Liege at home, should not prove as challenging as a trip to Vicarage Road, and both players probably prefer playing against continental opposition. So I reckon we’ll see the pair start, although the formation isn’t for certain. Ozil wide as one of the three attackers? Martinelli and Nelson the other two. Ceballos playing in the ‘Ozil’ role (achieving ignominy for Ozil even when he gets picked)? You can imagine Joe Willock is nailed on for one of the other two midfield spots, so let’s throw a curved ball in here…

AMN playing in his actual position?
Right back’s covered for now, so might we see Emery give Ainsley Maitland-Niles a start in his preferred position of central midfield, partnering Willock? There is an argument that Torreira needs to be playing more games, but this is an opportunity for Emery to assess what AMN can offer in a position that, although the club may be catered for in terms of numbers, still causes defensive concerns.

Count the crowd?
I was in the Highbury area around lunchtime, and there were already a fair number of Liege fans hanging around, so I expect a decent number in the visitors section. But what of the rest of the stadium? The group already looks a formality, the nights are drawing in, it’s on BT Sport. God, I’m even thinking of watching this one from the sofa myself! However, I have Gooners to distribute, and the Spy to natter with for 90 minutes and a pre-match tipple, so I will be there. Question is how many of my fellow season tickets holders will be. I am guestimating an actual crowd of approx 37,000 for this one.

History has given us goals
Ah yes, Standard Liege. The run to the 1994 Cup Winners Cup triumph. A last 16 tie in the autumn of 1993 that saw George Graham’s Gunners win 3-0 at home in the first leg, before whipping the Belgian 7-1 back at theirs… happy days (and Eddie McGoldrick scoring). Fast forward to a pair of Champions League group fixtures in late 2009 – a 3-2 Arsenal win in Belgium followed by a 2-0 victory at the Emirates. Played four, won four. I can’t remember much about the 2009 games. Truth to tell, my memory isn’t great for the 3-0 in 1993. I was at the 7-1 game in Liege though. Remember it well. Went to a gig by Scottish indie band Teenage Fanclub in Brussels the night before. My God, I just checked on Google and they’re still going. Well they sure aren’t teenagers any more, that much I know.

Conclusion
Lots of latecomers strolling in for the first ten minutes, high possibility of me and the Spy moving to better empty seats after 20 minutes. Home win. But not 7-1. 3-0 I could see though. Mind you, this is Arsenal – let’s give the visitors a goal. It’s kind of traditional, right? So 3-1. And remember to buy the new issue of The Gooner (subscribers, you should get yours in the post either tomorrow or Saturday – the sellers are selling it simply because it’s been delivered today, ok?)