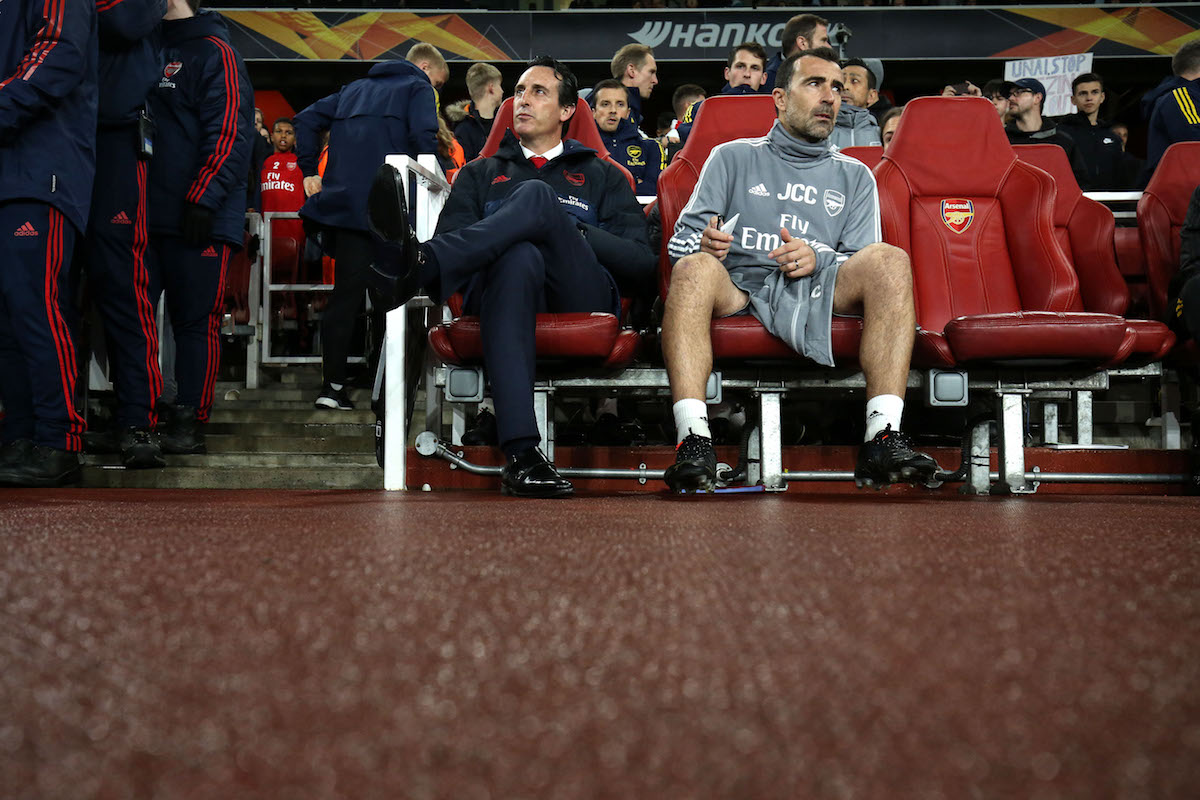 The spirit of Vic Akers lives on: Juan Carlos Carcedo with Emery

Hmmmm. Well a win’s a win for sure, but it really felt like Unai Emery got lucky with his last throw of the dice against Vitoria Guimaraes last night. But if you were using the best sports betting sites, you’d have been licking your lips before Pepe’s entrance, had you backed the away side. Now let’s genuinely assess the quality of the opposition. They were pointless going into the game last night, having lost at home to Eintracht and away to Liege. There would have found seriously long odds looking at cansportsbetting.ca if you’d backed a Vitoria victory. Granted, in the Portuguese league, things look better, where they are fourth (mind you a newly promoted club top the table, so who can say). But even with Arsenal’s shadow team, this should not have been the difficult evening it proved.

Emery’s team got away with some poor defensive play in their opening group game in Frankfurt, and the 3-0 scoreline looked good on paper. Last night, not so fortunate, as Vitoria twice made their hosts pay for mistakes. Tierney was caught too far upfield for the first goal conceded, and Maitland-Niles lost possession in midfield for the second, a consequence of the playing out from the back tactic being exploited when the control is not razor sharp. In between the two goals, another Martinelli headed goal for Arsenal confirmed Emery has strength in depth in his attacking positions.

It felt like the half-time scoreline reflected the reality that Vitoria were indeed the better team in the opening 45, and Emery removed Willock and Maitland-Niles for the second half to improve things, with Guendouzi and Ceballos replacing them. Even so, not enough was happening, and creatively, chances were not exactly flowing, and Vitoria could have even doubled their lead more than once.

There was a point in the first half when the Mesut Ozil chant started, although it did not really spread. Seeing the team line-up though, hearing Emery refuse to confirm Ozil has a future at the club, and recalling Ozil’s not so cryptic ‘You make me laugh’ tweet, it feels like curtains now. Given the lack of creativity at Bramall Lane, if Emery was going to consider re-integrating the number 10, last night was the night. As long as he is on the books, the debate will continue, but one suspects the decision has now been made. Freeze Ozil out, persuade him to move on. It’s then down to the player as to whether he wants to spend the next 18 months of a career which is nearing its conclusion collecting his wages and going through the contractual obligation of attending training sessions for games in which he will never play. It seems obvious there has been a personal fallout, presumably based on Emery’s frustration that Ozil does not follow his instruction in matches. If he has to adapt to the head coach’s ways to remain involved, it can’t be denied that he’s had plenty of chances. It now seems there will be no more. UPDATE – I can’t confirm this, but a rumour is that Ozil is effectively in the midst a three week period whereby he has been frozen out of first team action due to a disciplinary issue while Emery was absent. Let’s see if the story leaks out, but I am not going to publish details because I can’t substantiate it. Time will tell regarding the three weeks anyway.

Emery’s savior last night came in a different form – his final sub, Pepe entering for Alex Lacazette, who had failed to have as much impact as fans would have hoped. And with two excellent free-kicks, he turned the match around and gave his side the win at the death. It certainly feels like the team have found their best free kick taker, although it was probably just as well David Luiz was not playing last night as otherwise, it might not have happened. The winning goal came just before the conclusion of injury time and fans who had booed at half-time left on a high.

Let’s not pretend though that Arsenal look anything but an accident waiting to happen too often for Emery to be the solution to what the club needs at this time – which is a sense of solidity, a foundation on which to build confidence and credibly compete again.

The second stringers have flattered to deceive with a slightly fortuitous, albeit fantastic away win in Germany, and two easy home matches against poor opposition. Last night punctured the illusion they were any different from the first team. Emery got out of jail thanks to Pepe’s ability to find the net from a dead ball situation. Luck is a good trait to have, but it’s not something sustained success can be built on.

At times last night, looking at the positions players were taking up, it felt a bit like the total football of the Dutch team in the 1970s. But the quality and the intelligence is nowhere near the same. Emery is no Rinus Michels, and there is no sign of a Cruyff, Neeskens or a Krol in Arsenal’s ranks. So players get caught out of position and there is no colleague covering them. At times, the shape of the team feels ramshackle, like an abstract expressionist painting compared to the Mondrian of Klopp’s Liverpool. It doubtless makes for great viewing on TV if you are a neutral, and Arsenal have been on the box a lot this season. ‘What will the Gunners do next?’ – a mini-series you just cannot second guess. Pretty much anything could happen and there is always going to be some element of drama. So, on one level, exciting times… but probably not the kind of excitement that leads to success. Next up, Crystal Palace at home, and I doubt you’ll need reminding what happened the last time Roy Hodgson’s team rolled up at the Emirates.