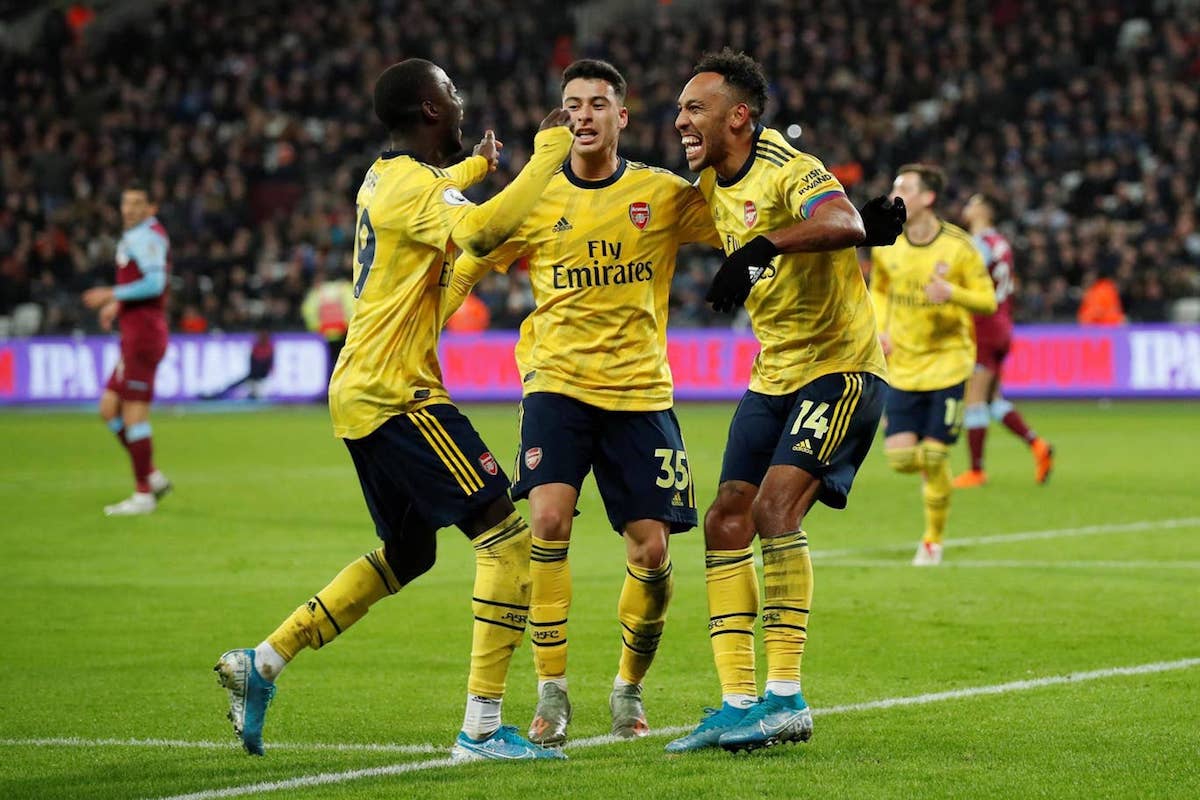 Well, so much for Arsenal’s more experienced players sorting out the team’s problems. Gabriel Martinelli and new boy Nicolas Pepe were two of the main reaaons for the Gunners recording a long-awaited and much needed win last night at the London Stadium. Freddie ljungberg’s team selection was generally well-received. The return of Kieran Tierney, moving Calum Chambers to centreback, dropping David Luiz, starting Pepe and Martinelli with Aubameyang in the middle. Ainsley Maitland-Niles at right back was not in the original plan, but Hector Bellerin tweaked a muscle in the warm up. Kolasinac, Willock and Lacazette dropped out to join Luiz and ultimately Bellerin as the changes from the eleven that started the home defeat against Brighton.

The game’s initial phase had the appearance of two countries in the third group game of a World Cup Finals in which a draw would see both of them qualify. The ball just seemed to be played around a lot in non-threatening areas – mainly Arsenal’s half, with West Ham letting them keep it – with no hint of anyone feeling the need to mount an attack worthy of the name. What we were watching were two poor teams with zero confidence between them. And bad as Arsenal have been, the Hammers have been no better. They definitely sat off, wary of conceding.

The first event of any note was the loss of Kieran Tierney after 28 minutes with what looked like a dislocated shoulder. Kolasinac had been added to the bench when Bellerin had to drop out, which was just as well. However, it was West Ham that opened the scoring after the ball pinged back and forth across the area. Granit Xhaka pulled out of a challenge to allow Ogbonna a free header. That might have been headed away by Maitland-Niles, but he didn’t like the look of the ball travelling towards him and turned his head away from it. The resulting deflection entered the net. It was rank, gutless defending, symbolic of what Arsenal have become in the cosseted world of a professional top flight footballer in 2019. You really wouldn’t want these guys in the trenches with you. Granit Xhaka is supposedly highly-respected in the dressing room, but on the pitch, he is a complete liability. One ball across the face of his own penalty area set up a West Ham attack.

The side was evidently so low on confidence, it really felt like they should play to their strengths, pump the ball forward and compete for the second ball. But no, they continued to play it out from the back. Let’s not be fooled by the win, there could be double figures on Sunday at home to Man City. The all-style and no substance nature of the play was demonstrated by Torreira trying a back flick from his side’s own penalty area D and it being intercepted. The players looked almost scared to make themselves available for a pass at times. The first 60 minutes of this match was as bad as I can remember seeing Arsenal. No shots on target in the first hour.

Fortunately, things changed. Torreira, Kolasinac and Martinelli combined for the Brazilian to justify his starting spot with an equalizing goal. A ten minute blitz and two more goals followed, courtesy of Pepe and Aubameyang. 3-1 up and the mood in the away end, which had turned very toxic, lifted. It was ironic when Granit Xhaka was injured and left the field even more slowly than that infamous substitution against Palace. As his team were 3-1 up it didn't matter and he even received a little polite applause from the travelling fans. He was poor last night though, adding little to the team except balls sideways and backwards.

West Ham didn't have a response and as the clock ticked down, it was good to see the home sections emptying and the proliferation of white seats. This was the final match in a theoretically ‘easier’ run of Premier League fixtures for Freddie Ljungberg’s side. With the games on the horizon, at 1-0 down, Arsenal were staring into the abyss. People have been putting bets on them getting relegated, and four points out of the last 21 available is certainly relegation form, with Leicester the only team in the top four faced in that run.

This was a much-needed win, but let’s not be fooled. Arsenal looked best driving forward, rather than looking backward for the safety ball and the idea of keeping possession at all costs, even though there is no threat to the opposition. They invite trouble and this is why I am fearful they will get ripped apart by Pep Guardiola’s team on Sunday. First, of course, we have the visit to Liege. The game should provide a chance to build further confidence, but Ljungberg would do well to experiment with his team’s tactics here and make them more direct, less ponderous. He stated after the game that the tactics worked because his team wore West Ham out with the gaps required after an hour had been played. Ultimately, they had three efforts on target and scored from them all. That West Ham only had four is, granted, a massive improvement, but perhaps that says more about the quality of the opposition than Arsenal’s defending.

Don't get me wrong, I am delighted the team won. But I have yet to be convinced that they have turned any kind of corner. The football came good last night because West Ham failed to take advantage of the Gunners’ defensive mistakes. I’m far from convinced other teams will be as generous. Time will tell, but on paper, Arsenal are two points off fifth place. The games over the next four weeks will determine whether the club focus their efforts on the Europa League once 2020 gets underway, and how long the club can afford to wait before a full-time manager is appointed.

One thing looks certain. The financial figures for last season released last week heavily suggest some player sales in the next two windows to balance the books. Fans might not worry about that too much if it is Granit Xhaka departing, but without new deals being agreed, more valuable squad members may well be departing. Arsenal remain a feeder club for those on a level they aspire to join. The only way you can retain big stars is by paying them outrageously (which the club now struggle to afford) or by winning the big trophies. It will take more than a win at West Ham to change that, but at least it settles relegation fears in the short term. Sunday will tell us more.