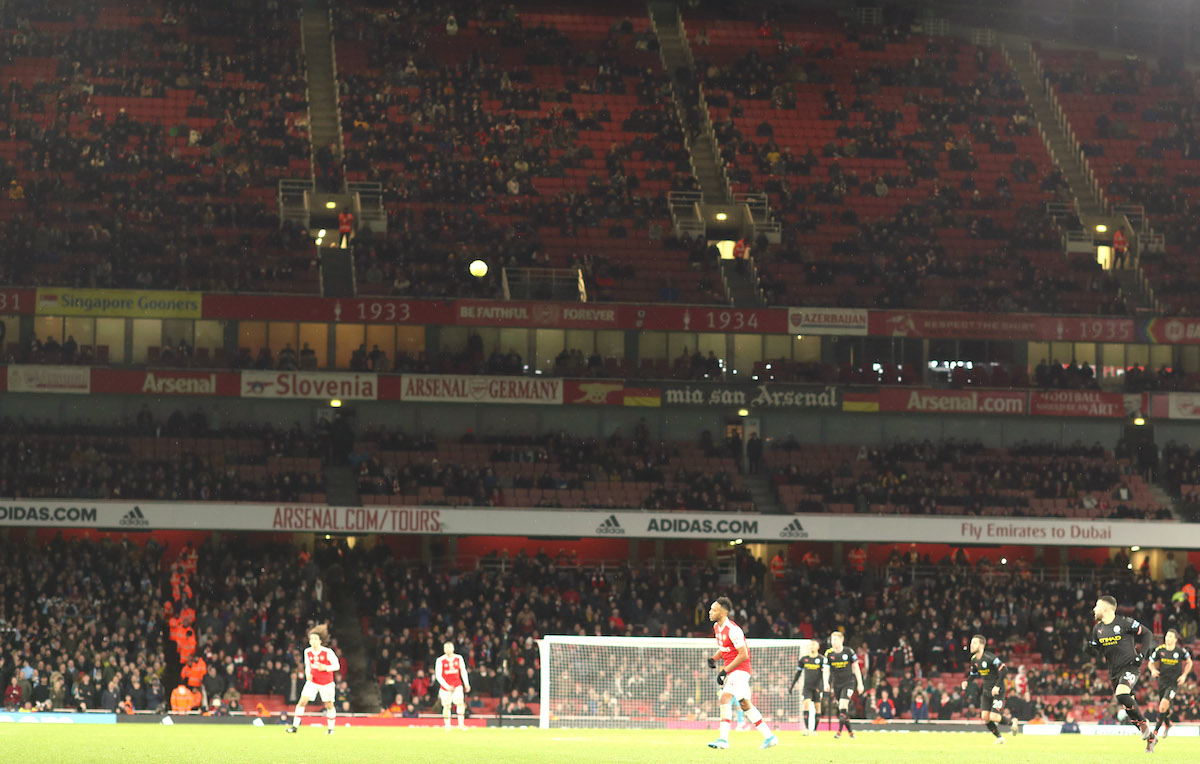 I sit next to the Highbury Spy at home matches. He has a general policy of getting me to find a buyer for his seat for Grade A matches, which are invariably on the TV. That adds up to a reduction of £420 a year on his season ticket (which from memory is around the £1300 mark). For yesterday’s game, I decided to sell my seat as well. Having watched Arsenal’s football this season, I figured there was no way they could prevent Man City outscoring them, and had no desire to watch an inevitable defeat on a chilly December afternoon. Seeing footage on Twitter of fans queuing to exit the stadium at half-time, I have no regrets about not attending.

This is a dangerous sign. I’ve missed home matches for holidays and work-related training courses in the past, but never chosen not to go to a game I could make. With the number of tickets available for any match (and the number of empty seats that mean that you can always sit with someone you know even if your seats are not together), there may come a time when I don’t even feel the need to renew my season ticket. This is not a matter of me stopping supporting the club and not wanting them to win, just an acknowledgement that you don’t need to have a season ticket to get into any home game you wish to, as long as you are organized.

I suspect the powers that be at the club are not too worried about the above – although it is a growing trend for season ticket holders not to attend by either selling their seats or leaving them empty. But what will be more apparent to them is the difficulty they are experiencing selling the lucrative middle tier seats, in club level and the hospitality boxes. At the moment Arsenal feel a bit like Woolworths. Failing to adapt to the times, and gradually sinking as less and less people frequent their premises.

I’ve written enough about the culture of complacency over the years, so don’t need to repeat that. It’s allowed poor decision makers to continue in post, due to an unambitious owner whose priority is simply that the club remains in the Premier League because of the broadcast income it guarantees. Champions League football is nice, but as long as profit is made, it’s not integral. Arsenal are now posting losses, so expect profit to come via the transfer market – as young talent that interests bigger fish gets sold off. Gabriel Martinelli will be in Spain by the end of 2021, for example.

Arsenal will bobble around the top ten between fifth and tenth, a bit like the early 1980s. They won’t have the funds to rebuild in the way that Liverpool have because the owner will insist on profits rather than re-investing transfer fees paid for outgoing talent. We are watching the consequence of a gradual decline that started when the board of directors failed to see that change was needed back in 2009 after a disastrous conclusion to the season. For those who don’t remember, in less than a month, Arsenal were knocked out of the FA Cup semi-final when the manager dropped his best player, humiliated at home by Manchester United in the Champions League semi-final, and defeated 4-1 at home to Chelsea. They also conspired to concede four goals at Anfield, in spite of Andrey Arshavin doing all he could to demonstrate why Arsene Wenger had been mad to drop him for the FA semi. It’s been downhill from there, although three FA Cup trophies masked the reality that the club was no longer competitive. It didn’t matter – they were posting profits year on year.

Is a football club about making profit or chasing glory? Fans don’t give a fig about profit, and as a consequence are now deciding they can do other things with their time rather than watch the consequences of what happens when a club puts profit before glory. In the end, things decline on the football front, and profits turn to losses. The latter will be turned around with player sales, but forget the football now. Arsenal need a different ethos from the owner, such as actually investing money in the club rather than siphoning it off. Stan Kroenke’s focus is his American Football Team’s new stadium, the only hope for Gooners is the unlikely prospect that things in Los Angeles become so stretched he is forced into selling the club – that’s unlikely.

Changes at boardroom level are likely to be announced at some point in the not too distant future, although the board are effectively already figureheads, so it is difficult to see what this will achieve, other than perhaps placating the fans with a popular figure who can act as a paid mouthpiece for the owner.

Anyway, a few reflections on the game yesterday. Martinelli came out of it with some credit, as did Bernd Leno and Emile Smith Rowe. It was interesting to hear Kevin De Bruyne explain post match that they were aware three of the four forwards weren’t interested in tracking back (i.e. Aubameyang, Pepe and Ozil) so they knew there would be space to create attacks for the deeper players. Either these players aren’t being coached in the idea of the team defending as a unit, or they can’t be arsed. And if it’s the latter, the best coach in the world can only not play them. There are some highly paid players nicking a living at the club right now, and the fans reacting to the highest paid of them when he strolled off when rightly subbed at the pace of his choosing was reminiscent of both Baku and Grant Xhaka against Palace. Quite simply, Arsenal are now at a stage where they need to roll their sleeves up and battle, and a youngster like Smith Rowe is going to give the team more than Mesut Ozil.

Still, let’s look on the bright side. Chinese based Gooners were spared witnessing this horrowshow as the country took the game off air after Ozil’s tweeted comments on the human rights situation there. It certainly ensures no offer to pay him even higher wages to move to Shanghai or similar is now going to happen. The player is comfortable collecting his wages in North London for another 18 months, the decision to keep him when Alexis Sanchez was sold now looking like possibly the worst waste of money in the club’s history, although the overpriced purchases of Shkodran Mustafi and Granit Xhaka in the summer of 2016 come close.

On a technical side, I noted that City move the ball into space and were far less static than an Arsenal team that invariably seem to play to feet. There’s limited movement off the ball. The third goal happened when Kolasinac came off but Saka was not ready to come on. Martinelli filled in at left back, but had no influence on the goal. In all honesty, there could have been a full complement on the pitch, and I doubt it would have made too much difference. At that stage you feared for what might happen, but fortunately, Leno pulled off a wonder save to prevent it becoming 4-0 before the interval, and the visitors were respectful enough to use the second half as a training ground exercise, with Arsenal in opposition as opposed to eleven dustbins.

Couple of things I will relay from different sources. Patrick Timmons on Twitter (@PatrickTimmons1) – “When Arsenal used to lose, it would ruin my mood for days afterwards. Now, I don’t feel anything. I go in expecting a poor performance and result. We come out with a poor performance and result. The majority of the players don’t care. The owner doesn’t care. It’s genuinely awful.”

A WhatsApp message from Ian Crawford (who gave up his season ticket several years ago): “Yesterday was perhaps more embarrassing than the 8-2 at Old Trafford. Man City toyed with us. We weren’t worthy of a spanking. Not worth expanding the effort. We’re no longer a football club - we’re a shell of a club going through the motions. All Arsenal does now is exist. Exist to give Kroenke a return on his investment. I’m not sure how much more of this I can watch. It’s like seeing a loved one get Alzheimer’s. They look like someone you love but they are withering away. Occasionally coming out with something but don’t kid yourself - there’s an inexorable decline. Bring on the European Super Leagues and we won’t be a part of it. A sad old unloved thing that has been left behind.”

Arseblog tweeted last night - “Told that news about the next manager is ‘imminent’. I don’t know any more than that, who it might be, or what that news is. Whether it’s the new man, or Freddie till the end of the season.”

It’s unlikely to be Freddie, given recent results. And that’s no reflection on him. Whoever comes in has a hell of a rebuild job to do, and working with an owner like Stan Kroenke makes a return to the good old days unlikely. Football moves in cycles, but Arsenal’s may still be in descent for a while yet unless there is a change in approach at the top level of the club. As for the executive team, Kia Joorabchian is the agent of both David Luiz and Edu. What players the club do buy going forward may not be purely based on good footballing decisions, assuming there is anyone capable of making those anyway. It feels like the club is rotten from top to bottom at the moment. Let’s see what they do next…