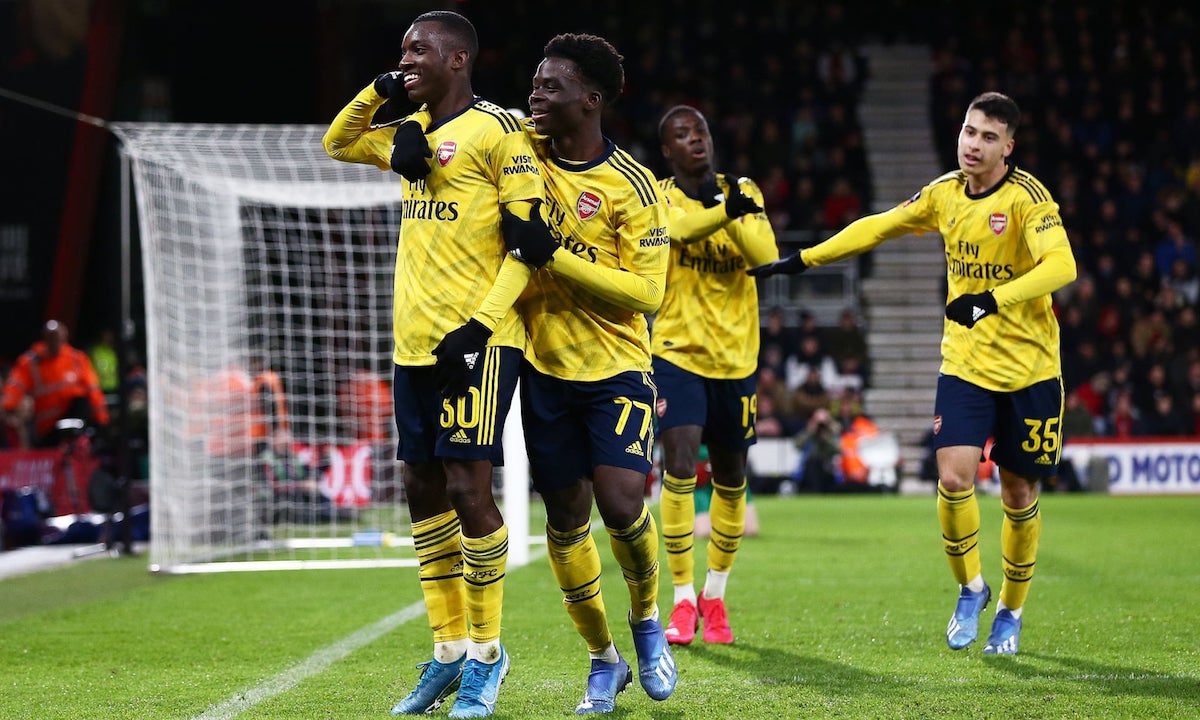 (Ed’s note: Apologies for the delay in posting – some tech issues this morning) Mikel Arteta made some interesting team selections for last night’s game against Bournemouth for this FA Cup 4th round tie. A month and a day after his first match as head coach, it demonstrated, even with a slightly weakened team, the progress that has been made since that 1-1 draw at the same venue back on Boxing Day.

With both Aubameyang and Luiz suspended, the hosts may have had cause for optimism. Shkodran Mustafi retained his place in spite of his first half errors against Chelsea last week. Up front, Alex Lacazette was rested and Eddie Nketiah given the chance to impress. Mesut Ozil was probably not delighted to make the trip to sit on the bench and see Joe Willock make a decent case to be selected ahead of him when the team visit Burnley next weekend. Damien Martinez had a runout in goal.

So, a very young forward quartet of Pepe, Willock, Nketiah and Martinelli with two more young players in the outfield ten (Saka and Guendouzi) demonstrating that the future may work out without the club needing to spend as much as others to improve their competitiveness. The team started wonderfully, running the game for the opening half hour and doing enough to make the rest of the tie comfortable.

They kept possession and moved the ball forward to secure the first goal with Willock and Martinelli combining to work the ball to Bukayo Saka to rifle home. Before 30 minutes were on the clock, Willock was involved again, as his ball to Saka allowed the left back to find Nketiah for a tap-in. The away fans were uncharacteristically housed behind the goal at the other end (normally at the Vitality they are on the side) due to a larger allocation than normal under cup rules. It meant many more were able to see Arsenal play there and it may be just as well. When they chanted, “We’ll never play here again” you could almost sense an acceptant agreement in the faces of the home support. Currently in the drop zone, and accepting Norwich are doomed, they are one of five teams competing to remain in the top flight and exiting the cup may not be the worst thing for their season.

They did rally to at least ask Arsenal some questions, but a third goal in this game could just as easily have been scored by the visitors. It was good to finally see Dani Ceballos get some game time under Arteta after a couple of appearances on the bench. He replaced Pepe for the final 20 minutes with Willock shifting to the right side of attack. He was tidy but unspectacular, although with the game in Arsenal’s hands, that was all that was required. Mustafi collided with his keeper after an hour had been played and required a stretcher as he was replaced by Rob Holding.

There are great hopes for Holding amongst the fans, but the honest truth is that in his games under Arteta, he has proved as shaky in possession as Mustafi. It’s a side of his game he needs to improve or he is not going to be a first choice. He lost the ball more than once in the half hour he was on the pitch.

Elsewhere, some excellent performances from many of the starting eleven. The turnaround in the discipline of Granit Xhaka is something to behold, with his often operating as an auxiliary centre back when both full backs venture forward. Even stuffed with youngsters, the shape of the team prevented easy opportunities and it is undeniable that the number of attempts on Arsenal’s goal has decreased, with the understandable exception of Chelsea away where the side played most of the game a man short.

Comparing this match with the 1-1 draw in December, it is encouraging to see how Arteta’s methods have improved the team. Granted, Bournemouth did make the final moments a little nervy after scoring in injury time, but it was too little too late. Arsenal won this match in the opening half an hour and then did enough to contain the Cherries’ threat. Before the match kicked off, the draw presented the winners with a trip to Fratton Park to face Portsmouth in the last 16. With the 5th round ties taking place midweek (a consequence of the mid-winter break) it means another evening trip to the south coast for the travelling support. Given Portsmouth’s League One status, there will be optimism about reaching the quarter finals.

More immediately though, and before they take a fortnight off (at least from playing matches), Arteta takes his players to Burnley. After two encouraging away performances, it will be interesting to see how they perform there.