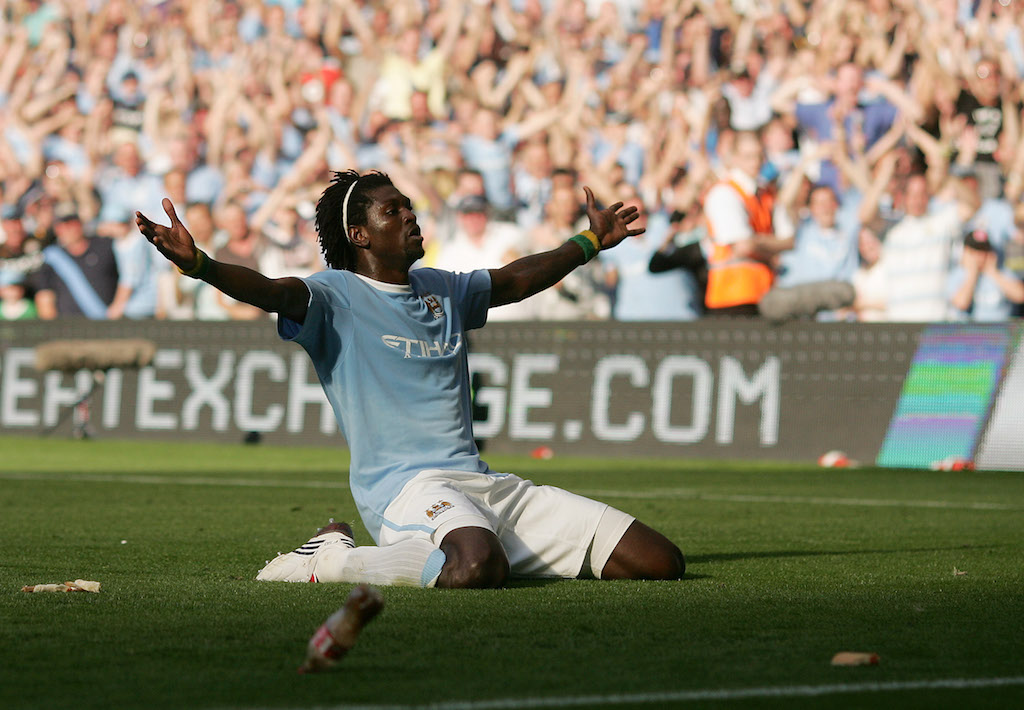 Emmanuel Adebayor has shown a selfish streak by emphatically refusing to donate to help Togo's battle against coronavirus. PICTURE: The former Arsenal forward celebrates after running 70 yards to taunt Gunners fans after scoring for Manchester City against the north Londoners in 2008. CREDIT: OFFSIDE

Former Arsenal striker Emmanuel Adebayor has caused controversy by refusing to donate a single penny of his fortune to his country’s efforts in fighting deadly coronavirus.

The forward, who infuriated Gooners everywhere when he ran the full length of the Etihad pitch in 2008 - before sliding to his knees only yards from the away support after scoring for Manchester City - has this time managed to repulse many in his homeland.

The 36-year-old, who also played for Spurs, has categorically refused to give any of the millions he earned during his time in the Premier League to aid Togo’s national health services in their fight against Covid-19 in the west African country.

The Lome-born attacker who also plyed his trade for Monegasque moneybags Monaco has rejected the chance to help his fellow countrymen and women – despite earning around £175,000 a week in England during his Premier League heyday playing for City.

'Let me be very clear: I don't donate'

Speaking while self-isolating in Togo, Adebayor, a former captain of his country’s national side, showed a selfish streak by emphatically refusing to give any of his cash to help battle coronavirus.

“I do what I want and eat what I want. Later, there will be people who will criticise me for the fact that I did not make a donation in Lome.”

Prior to the outbreak of the killer disease haunting the planet, Adebayor had been playing in south America as his career ticks down, linking up with Paraguayan side Olimpia following a free transfer from Kayserispor - during an underwhelming spell in Turkey earlier this year.

However, once the killer virus spread, Adebayor fled Paraguay for his homeland, stopping in France and Benin prior to landing in Togo’s capital Lome – with concerns raised in his homeland that the former Spurs player had brought the killer virus back to his country - a notion Adebayor strongly denied.

'Some think that I was the one who introduced the virus in Lome,' he added. 'It is very unfortunate, but this country is like that.'

While Adebayor is said to have given a number of children food supplies in Togo, his meagre financial contribution stands in stark contrast to fellow African footballers who have shown great generosity to boost their fellow citizens as cases of Covid-19 grow throughout the continent – with former Barcelona striker Samuel Eto'o promising to donate supplies to 100,000 people in his country, Cameroon.