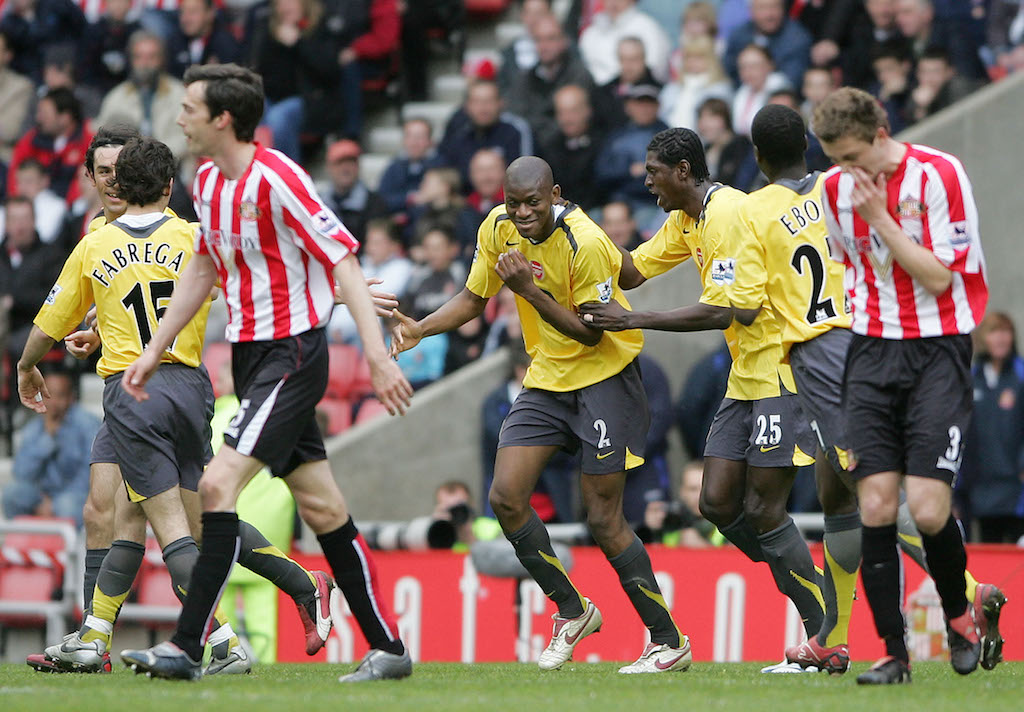 In a poignant photograph About Diaby celebrates scoring for Arsenal against Sunderland on this day 14 years ago. Only a matter of minutes later Dan Smith's horrendous challenge shattered Diaby's right ankle and left his career in tatters. CREDIT: OFFSIDE

On this day in 2006 Sunderland’s Dan Smith shattered Abou Diaby’s ankle with a reckless tackle bordering on the brutal.

The violent act resulted in the shattering of Diaby's right foot - and his career - as his body struggled to cope in the aftermath of such a debiliting challenge, prompting a series of injuries that blighted the talented French midfielder’s career.

In the seasons following Smith's shocking 'tackle' many Arsenal supporters – and no doubt Diaby himself - have pondered on what might have been for such a talented player.

Abou Diaby’s career is one sadly lost to time.

Plagued by injures, filled with ifs, buts and maybes, it’s now a footnote rather than one that should have been great. But, what could have been?

It’s just over a year since Abou Diaby ended his football career, aged just 32 and having not played for a club in nearly two years. It was a sad end to a career that should have been so much more.

Whenever his name his mentioned the first thing that comes into people’s minds are his injuries. The second thing, rather than being the career he did have, is the one he could have had.

A 19-year-old Diaby signed for Arsenal in January 2006 in a £2m deal from French side Auxerre. Arsene Wenger described him as a ‘tremendous addition’ to the squad and comparisons with Gunners legend Patrick Vieira were almost instant.

Both were tall, rangy, powerful central midfielders who had the stature to dominate a game. There was admiration from Diaby towards his compatriot too, once describing the 1998 World Cup winner as a ‘monument to French football’.

The former Auxurre man certainly had the talent to replicate his idol, with Vieira admitting as much in a 2012 interview with France Football.

“I am frustrated and disappointed for Abou Diaby with all the injuries he suffered,” he said.

“If he could have improved constantly, he would have reached an exceptional level. About his potential, he is better than me, better on a technical level, better dribbler, and better scorer too. In one word, more versatile than I was.

“Maybe I was better in terms of physical impact. I suppose it is very difficult for him to have not reached his best. But maybe it is not too late.”

Unfortunately, it was too late. By that time Diaby had played a little over 100 games for Arsenal and would finish his 11-year spell in north London with just 180 appearances.

The root of the injury problems that blighted the Frenchman can be traced back to May 1, 2006 and a day that changed the course of his career.

Smith's horrendous act on this day 14 years ago

In a Premier League clash with Sunderland at the Stadium of Light 14 years ago today, the hugely-promising Diaby netted a goal in a routine 3-0 victory, a matter of weeks before the Champions League final.

However, with the clock ticking down, as Arsenal looked forward to Highbury's final game the following week, Diaby was on the receiving end of a horrendous tackle from Smith that bordered on assault, that fractured his ankle in a serious injury he would never truly recover from.

Diaby was told it could end his career, but he bravely returned after three surgeries and eight months of rehabilitation.

Diaby was never the same again

However, he was never the same though, and endured pain and frustration for the rest of his career. Countless muscle problems and a serious ACL injury followed, but Wenger persisted with the midfielder despite his issues, fully aware of the talent he possessed.

He wasn’t wrong either.

When Diaby was fit he showed exactly what he could do. Powerful yet elegant, a good passer and dribbler, strong in the tackle, it was clear he had all the tools required.

A performance at Anfield in a 2-0 win over Liverpool at the start of 2012/13 season where he dominated the game with skill, energy and strength was arguably his best in red and white.

That campaign summed up Diaby’s entire career though. A good spell in the team which was ended by a run of injuries. As frustrating as this was, you could only feel sorry for him.

His time in N5 came to an end in 2015 when he was released, with Wenger summing up the sentiment towards Diaby and his career.

“It’s one of the saddest moments for us at Arsenal not to have had the opportunity to get the best out of Abou Diaby because of injury,” he said.

“He was always at home every night, prepared well every day and was not rewarded.

“He was the closest to Patrick Vieira we have seen here, with even a good offensive potential. It’s very sad.”

This article first appeared in the Islington Gazette earlier this year