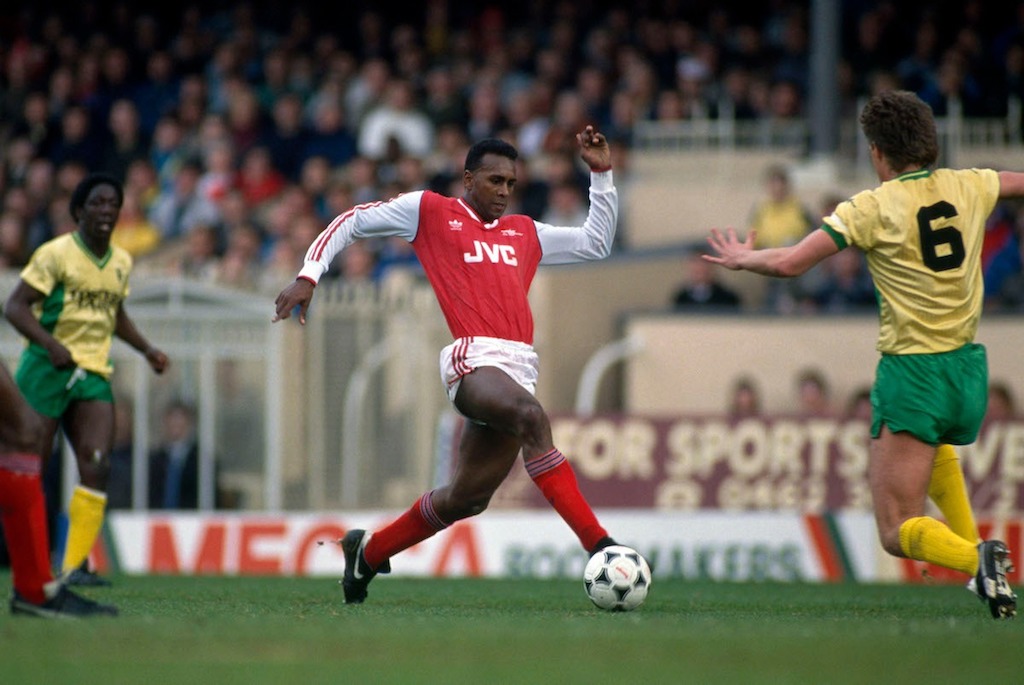 May 2 is always a poignant day for anyone connected with Arsenal.

It marks the day that club icon David Rocastle was born in 1967.

Read Layth’s tribute to Rocky who died at the tender of age of 33 from non-Hodgkin's lymphoma.

Today would have been David Rocastle’s 53rd birthday.

Many Arsenal fans will be marking his memory. My father and I certainly will be.

His legend will live on, as will his powerful credo: 'Remember who you are, what you are and who you represent.'

The reason I was born an Arsenal fan was because my dad, who came to this country in the early 70s loved football. Like many making a new life in a strange city, one of his first acts was to go and watch a football match. Yet his mind was made up for him the first time he walked through the turnstiles at Highbury.

A brown face at a football match in London in the early 70s often bore the brunt of racist comments by many and the threat of physical harm from some.

But the one stadium in London he said he no-one picked on him about the colour of his skin was at Highbury. Of course racism occurred at the ground - it would be churlish and plain wrong to suggest otherwise - but to this day he swears he supported Arsenal because he came across no-one who was racist towards him that pivotal day in the early 70s

It certainly couldn't have been the football, with the 16th and 17th place finishes in the league in the mid 70s the nearest we came to relegation since before World War One.

I am reminded of this fact every time he and I talk about 'Rocky' and his mantra.

For me the quote sums up the virtues of honesty, modesty, loyalty and respect. It speaks of being true to your roots and yourself. But it also evokes the inherent decency of human nature mixed with a humble self-discipline, as well as a generosity of spirit and an uncomplaining appetite for hard work

My father always had an affinity with Rocastle, as he understood that Rocky's dad was a hard-working immigrant in this country, just like him, having to raise his family in a council estate, just like him.

He also knew later that Rocastle senior unfortunately died when Rocastle was five. We can only imagine what effect this tragedy had on young David.

But did it also give him the drive, the desire the will to succeed that often accompanies young footballers who progress in the game, separating them from their peers who lack such vital ingredients?

David Dein certainly thought so excitedly informing his wife after watching Rocky in Arsenal's South East Counties team for the first time around 1983, saying: 'I've seen a boy in our youth team that can dribble like a Brazilian. And he`s from Lewisham!

Rocastle was a talented member of our famed youth team in the years when the first team was riven by cliques and underachievers. He graduated into the senior squad along with contemporaries such as Tony Adams, Niall Quinn, Martin Hayes, Paul Merson and Michael Thomas. Such was their dominance in one South East Counties league game in the 83-84 they beat a Spurs team 10-1.

Another reason we loved him was because he was a true Arsenal man.

He knew the ethos of the club, having been schooled in our rich history. He knew which sepia tinted figures to revere, and he had uncomplainingly cleaned the mud from boots of older, lazier first team players who weren't fit to lace his own.

To put it simply he was one of us.

It was as if you or I had been transported from a council estate and the North Bank or Clock End onto the rutted, muddy Highbury pitch, as it was every winter back then.

I grew up watching Rocky flourish.

I was part of an 18,000 Highbury crowd for his debut against Newcastle United in September 1985, a typically dour 0-0 of the time, enlivened only by his apparent flair and potential.

I was there for all three Littlewoods Cup Semi Finals in the spring of 1987, crushed and sweaty against the fencing at the front of the away end behind the goal for the second leg, and the replay at White Hart Lane.

Rocky even showed an old-school modesty in celebrating netting the winner - in that famous game which saw the Spurs PA inform home fans on how best to apply for Wembley tickets at half-time.

I was also there for the never-to-be-forgotten Littlewoods Cup Final at Wembley under a perfect blue sky on April 5, 1987.

Even now when I think of Wembley finals, my mind's eye frames that day. The team had the invincibility of youth on their side. So had Rocky. Come to think of it, so had I back then

I was in the Clock End in February 1988, for another League Cup semi-final, the night a heaving crowd of 51,000 saw him dummy Neville Southall on the edge of his area, but slot the ball wide of an empty net.

Of course, not a soul criticised his miss, they recognised he was giving his all for his team, his club and us. We also understood he'd do his best to make amends – as one of the many things we knew about him was his strength of character.

He did make amends of course.

Chasing down a lost ball with the conviction he'd win it - something he did a lot - he crunched into Pat van den Hauwe. The ball squirted inside to Perry Groves. He in turn fed Michael Thomas who was powering through the middle, before slamming the ball into the hard ground and over a despairing Southall.

As pleased for his good friend as he was for the team, the club and us, Rocky immediately and gleefully joined in the celebrations, despite having just made a tiring 50 yard sprint. It was such behaviour which made us love him even more.

I was also there at Anfield in the third round of the League Cup in October 1988 the night he hit a late but perfectly timed 30 yard volley into the net to equalise in front of 6,000 travelling fans from London.

With typical modesty, he said after the game the only reason he shot was because he was too tired to control the ball.

He was a true heir in the lineage of the Gunners' revered No 7 shirt, from Liam 'Chippy' Brady to George 'Geordie' Armstrong to 1930s legends Alf Kirchen and Joe Hulme.

Yet just as he seemed to be on the cusp of being the world class player we at Arsenal believed he would be, a knee injury changed life for him utterly.

It denied him speed and confidence, the two things he thrived on to beat players, a trademark strength of his. George Graham, an unsentimental Scot if ever there was one, sold him to Leeds in the summer of 1992

A stunned Rocastle recalled later, 'I sat in my car and cried. Playing for The Arsenal was all I ever wanted to do'.

I still choke reading those words more than 20 years later - not just for the feeling of utter pride in my club it brings me, but more importantly, like many thousands of other Arsenal fans, for the love and respect it inspires in me for Rocky – a gentleman and an Arsenal legend.

So today I'll be taking a minute to remember this honest, modest, loyal, fun-loving family man who was taken so cruelly from us, at an age in life which was no age at all.

I know my dad will too.

A version of Layth article has appeared in the Daily Mail.