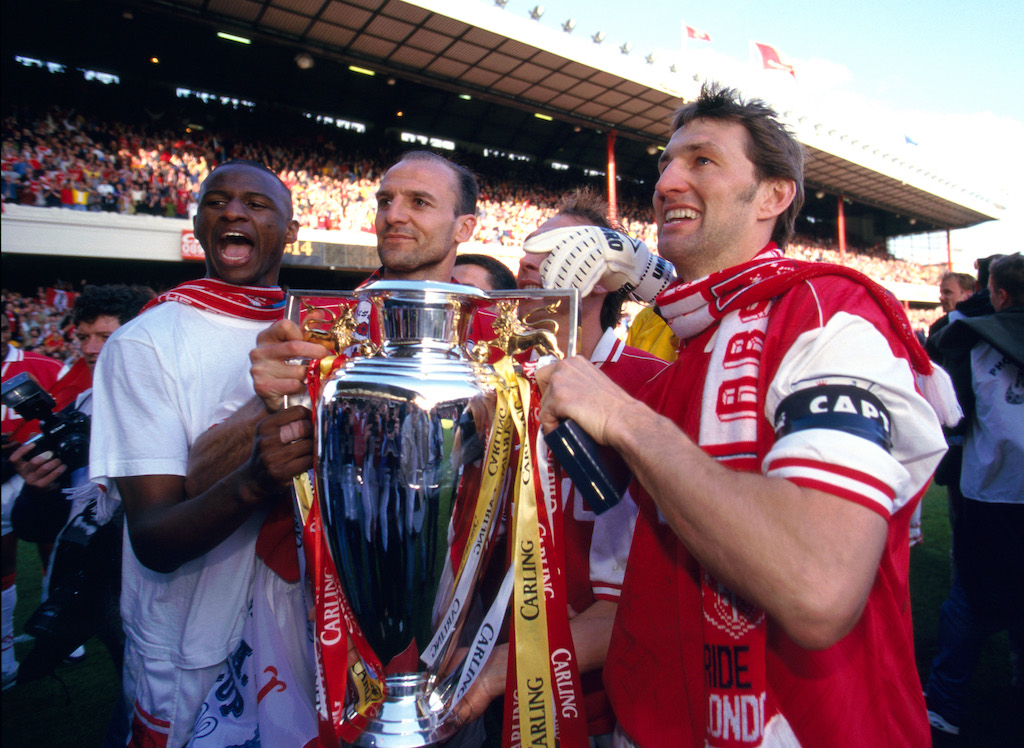 During the fraught 1997-98 Premier League title-run in Sir Alex Ferguson said it would be ‘inevitable’ Arsene Wenger’s side would drop points.

They didn’t. They burned off their hated challengers from Old Trafford in imperious fashion, winning ten on the bounce when required to do so – a sure sign of peerless mental toughness in a side.

A 2-0 victory against Barnsley at Oakwell with a sublime piece of magic from Dennis Bergkamp and a vital 1-0 win over Derby at Highbury in midweek meant the Gunners could call themselves champions by beating Everton on May, 3, 1998.

History was duly made at a raucous Highbury on that wonderful afternoon 22 years ago today.

An Everton side stalked by relegation were no match for one of the best sides in Arsenal history.

Wenger’s team, supplemented by a veteran back four (five) given a new lease of life by Le Professor’s revolutionary adaption of the latest sports science methods (at the time) allied with an unrivalled inside knowledge of an outstanding crop of young French players proved an unstoppable force.

Arsenal to good for Everton

Arsenal were simply too good for the Toffees who appeared shell-shocked after wave after wave of vibrant attacking, intense pressing superb movement – on and off the ball – and intelligent passing left them battered.

It was no surprise the first goal came after only five minutes on a red letter Highbury afternoon. Petit swung in a corner. Tony Adams – who had shown such courage on the pitch for the club through two decades of service, and off it by bravely confronting his demons – pressured Slaven Billic into heading into his own net.

The scoreline doubled before the half hour mark when Don Hutchison crunched into Petit. With the Arsenal staff fearing the worst with the FA Cup final only a matter of weeks away, Marc Overmars took the ball, driving forward to accelerate away from Everton’s static back four before slotting past Thomas Myhre to make it 2-0.

Now a jubilant Highbury knew the title was coming to north London. Even Wenger knew it. Usually so calm back then the Frenchman jumped into Pat Rice’s arms at the goal.

Overmars notched a second on 57 minutes to make the game safe – before a finale for the ages took place in front of disbelieving supporters and commentators, for that matter.

Steve Bould and Adams - so long derided by opposing fans and certain elements of the fifth estate as cumbersome and limited – contrived to produce a goal so stunning and unexpected it was to leave the entire crowd open-mouthed at its glorious audacity, inventiveness and finesse.

With the clock ticking down Platt stopped a tired Everton run on the halfway line before Bould, finding himself in midfield, picked up the ball. His only thought was to play it forward to an onrushing colleague. Much to everyone’s surprise, Adams was the Arsenal man powering forward on an overlap.

The teak-tough captain of the Gunners waited for the ball to bounce before chesting it down – the touch sent him to his left slightly – but the angle was not a problem as he pulled his left leg back, to connect perfectly on the half volley to fire it into the net in front of a joyous North Bank.

His stupendous act sent Highbury into raptures at one of the most stirring goals the grand old ground had ever – and would ever – witness.

Adams, in relief and surprise as much as celebration, simply stood with his arms extended in an iconic shot that would forever be venerated by Arsenal supporters the world over. An image that would later be carved into bronze outside a new state of the art ground.

At that moment, Adams’ attacking colleagues Ian Wright and Overmars simply jumped on him in disbelief as the crowd erupted at what they had just seen – a real ‘I was there moment’.

It was a goal that could only have been scored by a team led by Wenger at that moment in time, created and executed by two defensive giants who had previously been denied the chance to show attacking skills of their own.

It was a truly magnificent goal on so many levels – and one laced with delicious irony too.

After the final whistle Highbury staged a wonderful party as the whole crowd sung ‘Champions’ over and over again, as well as “Wenger Wonderland’ and, of course, ‘Are You Watching Tottenham?’

Of course, there was only one team in London that entire decade – and didn’t Arsenal supporters love it.

Afterward the celebrations inside the ground died down – it took a while – I went up to the Highbury Barn with a large group of friends and we celebrated in the street, drinking anything we could get our hands on. Beers – and champagne were sprayed and some fans jumped on passing cars, while others clambered up any vantage points they could find including bus shelters and roofs. It was like New Year’s Eve and the Notting Hill Carnival rolled into one.

Supporters were 30 deep in the street singing and dancing and hugging and backslapping as cars honked their horns to a backdrop of joyous noise. Underfoot was broken glass, torn newspapers and beer cans. It was simply wonderful.

Even Alex Ferguson had to admit he was wrong about the character shown by Arsenal during that season and that era – when Arsenal were Kings.