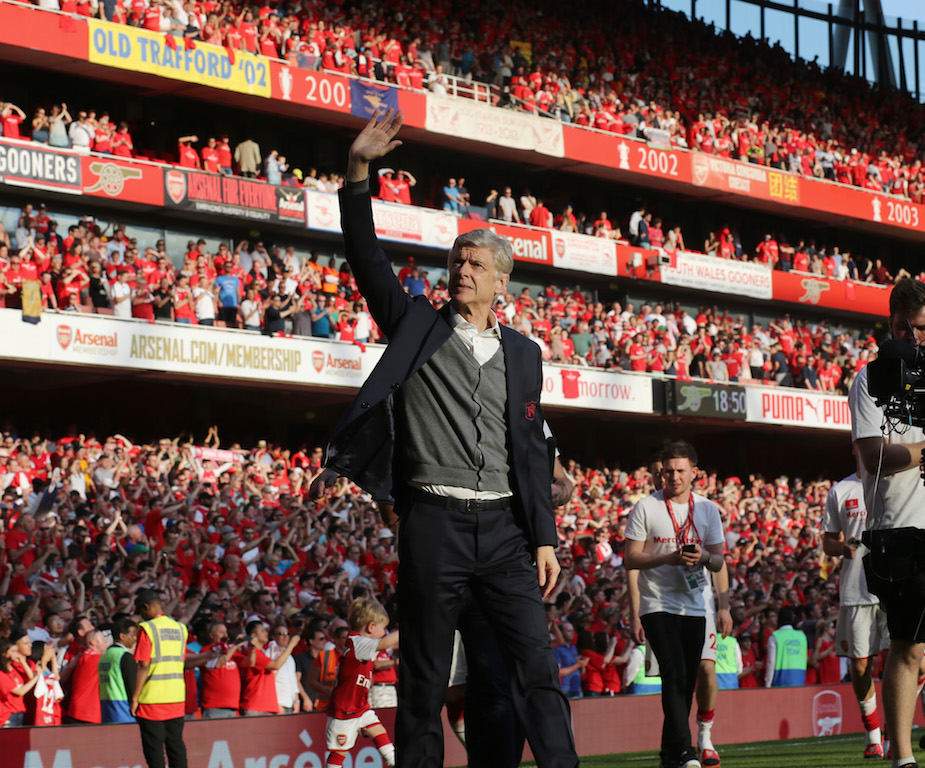 REWIND: On this day in 2018 Arsene Wenger said a farewell to the Emirates after Arsenal beat Burnley 5-0 in what was his final home match after 22 years in charge of the north London giants. CREDIT: OFFSIDE

On this day two years ago Arsene Wenger said farewell to the Emirates with a 5-0 victory over Burnley in his final match in charge in north London.

Read Layth Yousif’s feature on Wenger written in the Emirates press box during the victory over Burnley and published minutes after the final whistle on May 6, 2018.

“I couldn’t give these away for love nor money last month,” he told me, adding, “I’ve sold 17 already and they haven’t even started selling the programmes yet.”

You could understand his bullishness. North London was full of it on a gloriously sunny afternoon.

Fans had come from all around the world to praise, not bury, departing Arsenal manager Wenger – and the whole of N5 had bought into it.

From burger vans plastered with pictures of the Frenchman – who has spent 22 years at the ‘love of his life’ at the Gunners – to those who congregated outside the Marble Halls on Avenell Road in a form of a footballing wake.

The programme sellers, once their special edition ‘Merci Arsene’shiny publications arrived, were also busy. Near to the Tony Adams statue – who Wenger once called the ‘doctor of defence’– fans were buying handfuls of the collectors issue, only days after the EFL considered scrapping a requirement for lower league clubs to produce a matchday offering in print.

Piebury Corneron the Holloway Road, a Mesut Ozil through-ball from the Emirates, conjured up a pie in his honour. Chicken and broccoli in homage to Le Professor’s early work when he banished tradition pre-match fayre of steak and chips at Arsenal. English football followed suit a few years later, copying his revolutionary take on sports science which included drinking water at the optimum temperature and masticating the correct number of times for the full effect.

The years from 1996 to 2006 brought some of the finest football Arsenal fans had ever seen, played by footballers who appeared to be from another planet – or at least far removed from their stodgy English counterparts.

Wenger extended the shelf life of the famed back four and gave them all a new lease of life by stretching their talent and hard work metaphorically and literally as his current number two Steve Bould among many others credited the Frenchman with adding years onto his career.

In a neat but desperately disappointing reverse of that scenario wags have said that Wenger has also done that to Bould during his coaching career – by refusing to let him do any work on the training ground.

Innovators and revolutionaries by definition can only do it once

The thing with innovators and revolutionaries is by their very definition they can only do that once. And so it was with Wenger.

Once even the likes of arch anti-football protagonist Sam Allardyce started firing up Power Point presentations on the value of the correct nutrition the writing was on the wall.

A changing landscape as billionaire oligarchs enter the frame

Magnificent doubles in 1998 and 2002 followed by the immortal Invincibles in 2004 and finding themselves 17 minutes from eternal glory on a warm Paris night in May 2006 in the Champions League final against the might of Barcelona slid into a form of mesmerising mediocrity thereafter.

Wenger and Arsenal were hit by a perfect storm of a changing landscape on and off the pitch as billionaire oligarchs rendered the self-sustainable blueprint – which predicated the move from Highbury – completely irrelevant.

All had changed. Changed utterly.

And Wenger and his methods, which were never given to in-depth tactical analysis, certainly not on the level of his new managerial rival Jose Mourinho at Chelsea in the summer of 2004, looked old and dated.

The fact he was operating with a financial handbrake with the move from Highbury, coupled with the loss of his consigliore, David Dein, and the fact he decided, madly, beautifully, infuriatingly, and ultimately unsuccessfully to adopt a youth is best policy – aping his bitter rival Sir Alex Ferguson who won things with kids.

Yet Wenger was let down by players who were unfit to lace the shoes of the Invincibles – from Alexandre Hleb to Alex Song and so many others as well, which, when compounded by his inexplicable decision to dispense of his 2003-04 side far too quickly, handing the likes of Dennis Bergkamp and Robert Pires one-year contracts, ultimately ushering them out of north London.

Yet, at the time, these legends had little reason to comply with signing one-year deals. But they did. Because of Wenger.

However, the former Monaco coach had refused to follow Ferguson’s lead of periodically employing new number twos who could inject renewed vigour, ideas, methods, tactics and faces into the increasingly tired looking scenario at London Colney.

Wenger’s glory years sped into the past leaving frustration

Pat Rice will always be a true Arsenal legend who devoted his life to the cause, but he was hardly to be spotted at a UEFA tactics seminar.

And as the glory years sped into the past – compounded with humiliating and completely avoidable defeats such as the 8-2 shellacking at Old Trafford in August 2011 – the feeling was Wenger appeared to be past his sell-by date.

He responded with three FA Cup victories in four years. A triumph which has not had the acclaim it deserves, yet despite the never-to-be-forgotten comeback against Hull City in the 3-2 victory in 2014 and the wondrous 2-1 triumph to deny Antonio Conte’s Chelsea champions the double last year, the feeling existed that Wenger had become a 21st century equivalent of the final days of George Graham in 1995 after the team had become a cup side that could not challenge for the highest honours in the game.

With Wenger there is always an element of otherworldliness. And so it was with his ethos.

That things should be done the right way. The Arsenal way.

Which chimed with millions of supporters, not just in North London but around the world.

Wenger feted with love and affection across Europe

It was instructive to me as an Arsenal correspondent chronicling the club’s run in the Europa League around the continent this term just to see the respect Wenger has been held in around Europe. From Serbia's Red Star Belgrade’s Marakana Stadium to Italy's San Siro to Spain's Atletico Madrid’s Estadio Metropolitano Wenger has been feted with love and admiration.

Which he felt was denied him from various pockets of supporters on the internet and social media, that, unable to express their dissatisfaction with any form of articulacy resorted to the lowest common denominator – personal abuse.

Despite what the dignified Wenger admitted publically it did hurt him. He hinted as much in his first public press conference after the news he was to leave the club.

It was to his credit when the day came the first thing he asked for was his entire staff to have their contracts paid out in full.

However, the desperately disappointing defeat at the hands of Diego Simeone’s Atletico on Thursday, to end any hopes of the club being swept to Europa League glory on a wave of emotion at Wenger’s departure was indicative of his later years at the club.

Despite the players talking a good game they went out at a raucous Metropolitano with a whimper. As they have done in the majority of big games they have played over the last decade.

When Diego Costa’s goal sealed the defeat it felt like a culmination of every single crushing loss over the past 12 years rolled into one.

Yet on Sunday against Burnley everyone in the Emirates hailed Wenger

What did it prove? That supporters are forgiving? That they have short memories?

That Wenger is actually loved and respected by so many more than the vacuous vocal minority?

Perhaps it is his innate decency and dignity allied with glorious memories of his first decade of unrivalled silverware.

Is it Arsenal FC or Arsene FC?

When he was given a guard of honour from his side and Sean Dyche’s Burnley in front of 59,540 fans – a number you could believe for once – it certainly felt like the latter.

A win on his final day was never in doubt through first half goals from Pierre-Emerick Aubameyang and Alexandre Lacazette – as much due to the atmosphere as anything.

And as Sead Kolasinac’s low strike made it 3-0 early in the second half the crowd – as one, united, again – sang ‘There’s only one Arsene Wenger’in praise of the great man who will be spoken of as long as Arsenal Football Club exists.

There was still time for Alex Iwobi to score – a player who represents the best and at times the worst of the modern-day Wenger.

It was appropriate such an underachieving player found the net on Sunday of all days, as it represented the loyalty Wenger has shown, sometimes too much of it, to the detriment of his team, but will be one of his epitaphs: Loyalty and utter loyalty in his side. Even if it wasn’t always replicated by his men.

As a couple told me - who had flown in from Beijing specifically to be at the Emirates for his last ever match in North London: ‘Mr Wenger is a fantastic man’.

It certainly felt that way today.