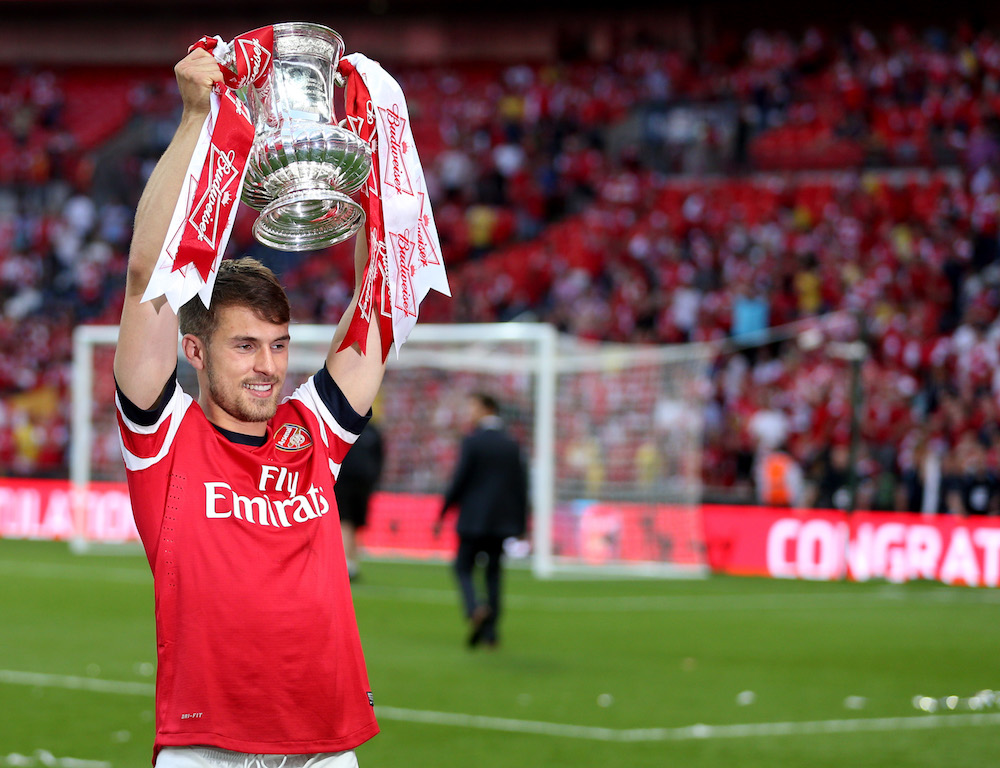 On this day in 2014 Arsenal ended a nine-year trophy drought to lift the FA Cup by beating Hull City 3-2 in a thrilling final. PICTURE: Matchwinner Aaron Ramsey with well-deserved silverware. CREDIT: OFFSIDE

With fourth place safely secured along with the prospect of Champions League football for the 17thyear in succession, a trip to Wembley in glorious May sunshine beckoned.

With such an appealing prospect to be savoured by Arsenal supporters off down Wembley Way despite a scandalously low allocation of only 21,000, the rancor and bitterness engendered by those in pro and anti Arsene Wenger camps were put aside for an afternoon.

The cup run started against Spurs in a third round London derby in which new Lilywhites boss – and Gooner – Tim Sherwood was made to look distinctly second best, as goals from Santi Cazorla and Tomas Rosicky proved North London was red as the Gunners completed the second of their trio of victories over their noisy neighbours, whose campaign never really recovered from the loss of Gareth Bale to Real Madrid.

The derby was also memorable for winger Theo Walcott signaling the score to Spurs fans while being carried past them on a stretcher in a memorable image. The away support riled, then took umbrage by pelting Walcott and his stretcher bearers in a hail of loose change - with wags among the Arsenal crowd claiming it was the last of the £80m they had received – and squandered – from Real Madrid.

Unfortunately for the Gunners in-form wideman it was to be his last contribution of the season as a scan the next day revealed he had injured his cruciate ligament, ruling him out of the rest of 2014 and another World Cup, this time in Brazil.

Troubled Coventry City were the next to fall, in a rare Friday night game. Arsenal supporters to their credit, showed solidarity with the Sky Blues’ ownership and stadium problems by clapping them at various appointed moments during the match – a gesture much appreciated by the significant and vociferous travelling support. There was to be no such camaraderie on the pitch as the Gunners eased past their visitors from the west Midlands 4-0 through a brace from Lukas Podolski and two late strikes from Olivier Giroud and Santi Cazorla to reach the fifth round and a date with Liverpool.

The subsequent 2-1 victory over the Reds was revenge of sorts for the 5-1 drubbing they had suffered only eight days before in the Premier League as future Anfield attacker Alex Oxlade-Chamberlain and Podolski providing the goals to propel Arsenal into a sixth round tie at the Emirates against Roberto Martinez’s Everton.

An early Mesut Ozil goal settled nerves and even as Lukaku leveled a Mikel Arteta penalty (whatever happened to him?) against his old side, two late Giroud efforts booked a Wembley semi-final date against the holders, Wigan Athletic.

A tense game at the national stadium was eventually won by Arsenal 4-2 on penalties after a fraught 90 minutes which saw the Big F******* German, Per Mertesacker grab a late equalizer to prevent the Gunner becoming another giant-killing scalp by an impressive Latics side. The wild scenes of unrestrained joy on and of the pitch as Cazorla’s post-kick went it belied the thought of a trophy once again arriving in N5 after eight long years.

And so to the final

My weekly Arsenal column in the Islington Gazette published 48 hours before the showpiece even was headlined ‘Arsenal FA Cup finals are never dull’.

So it was to prove…

Subs: Sanogo for Podolski, Wilshere for Cazorla, Rosicky for Ozil

Subs: McShane for Bruce, Aluko for Quinn, Boyd for Rosenior

There had been three Prime Ministers and nine different Chelsea managers since Arsenal had last lifted silverware prior to the 2014 FA Cup final. Not to mention the fact Wayne Rooney had grown hair, lost it and purchased some in the nine years from 2005. Fans of other teams never grew tired of reminding Gooners about the wait either – despite the same high standards that had failed to be applied to their sides, which was, in a way, a backhanded compliment to the club.

But as the big day approached no wonder Arsene Wenger, the team and every Arsenal supporter across the globe was determined to end the albatross of 3,283 days without a trophy.

Tigers boss Steve Bruce, in Hull’s first ever FA Cup final appearance – becoming the 57thdifferent side to play in the Wembley showpiece – had other ideas, proclaiming before the match: “If you’re not an Arsenal fan then I’m sure the rest of the world will be rooting for the underdog.” While former Spurs midfielder Tom Huddleston said he would be looking to beat Arsenal for Tottenham supporters as much as himself.

Cup final morning was glorious. As it always was for Arsenal. Clear blue skies reminded all Gunners fans of sunny days and Wembley victories when the 1971, 1979 and 1998 FA Cups – not to mention the 1987 Littlewoods Cup – were won in north west London.

Not that Hull were going to let that fact stop them. On three minutes the team from Humberside - minus their cup-tied big-money strikers signed in the January transfer window, Nikica Jelavic and Shane Long – were 1-0 ahead.

Bruce had started with what looked like a rather defensive midfield starting XI, with three centre-backs. However he backline triumvirate played a large part in the astounding events of the opening eight minutes as Arsenal fell 2-0 behind.

From a Stephen Quinn corner, Huddleston miscued the ball, which fell to James Chester. Chester, who was quoted at 66-1 to score the first goal showed quick feet in diverting the ball across Fabianski, playing what was to be his final game for Arsenal.

Untramelled joy ensued from the visitors from the north, matching the unrestrained celebrations on the pitch. More was to follow as Arsenal resembled a prize-fighter who starts cold, only to be brought to his knees before the contest has even started in earnest.

On eight minutes, Hull were an improbable 2-0 up as a free-kick was flighted into the Gunners area with the backline looking disorganized and hesitant – when was it ever thus? Myler’s header was recovered by Quinn, who crossed it to the manager’s son Alex. His underwhelming header evaded Fabianski but rebounded off the post into the path of another centre-half, Curtis Davies.

Davies, who had written to 20 Premier League clubs as a youngster asking for a trial – receiving a kindly rejection from Arsenal, but ignored by the majority of others – steered the ball home from an acute angle past the Gunners despairing Polish custodian. As the ball crossed the line, Davies set off on a triumphant run, no doubt fuelled in small part by the memory of Arsenal’s rejection.

2-0 down with fewer than 10 minutes on the clock would have floored many Wenger sides of the previous 3,283 days. Not so this vintage. Gibbs was alert to clearing off the line from the redoubtable Bruce junior when 3-0 was a real possibility in a pivotal moment as the Gunners gradually cast off their shock and began to display their technical superiority, even as Hull stalked their every move like the Tigers they were.

Arsenal, awoke from their slumbers, showing a fluidity that was absent in the early stages as Santi Cazorla scored one of the best – and criminally underrated – cup final free-kick goals in history.

Unfortunately his supreme effort was drowned out in the drama that was to follow. With the game poised at 2-1 in the second half with the clock ticking down, Wenger switched the formation to 4-4-2 bringing on Yaya Sanogo as they pressed for an equalizer.

To the relief of Arsenal fans everywhere, City’s resistance was finally broken by Koscielny on 72 minutes, as the Frenchman headed home from close range to make the score 2-2.

Despite Kieran Gibbs, Olivier Giroud and Sanogo going close in the allotted 90 minutes the match went to extra time. With both teams tiring Wenger introduced Tomas Rosicky and Jack Wilshere for the final 15 minutes. To Arsenal delight the move paid off as their fresh legs helped the team clinch a late winner.

On 109 minutes, a clever Giroud backheel at the near post fed Aaron Ramsey as he instinctively poked home past McGregor’s near post.

Cue pandemonium from Gooners everywhere. Ramsey himself, in a neat nod to history, performed his version of a Charlie George 1971-style collapse on the hallowed but energy sapping Wembley turf.