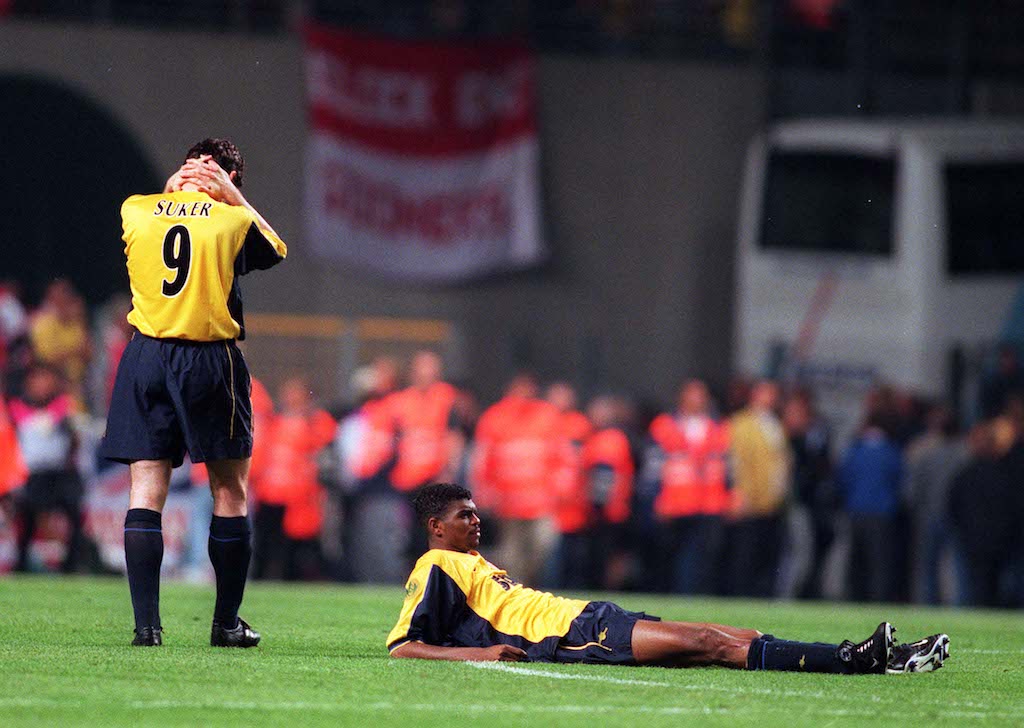 Davor Suker and Kanu are dejected after Arsenal's loss to Galatasary in the 2000 UEFA Cup final in Copenhagen. Pre-match was marred by trouble. CREDIT: OFFSIDE

On this day 20 years ago Arsene Wenger's Arsenal played against Turkish side Galatasary in the UEFA Cup final in Copenhagen.

Layth Yousif was there. Read on for his account.

The game was played at the Parken Stadium in the Scandinavian city. It was a ground that held happy memories for Gunners fans after their against-the-odds victory against a star-studded Parma side in the 1994 European Cup Winners Cup final.

Their 1-0 triumph, through an Alan Smith goal against the Serie A team at the peak of their powers that included Faustino Asprilla, Thomas Brolin and Gianfranco Zola, was dubbed The Miracle of Copenhagen. Six years on from that match many fans set off in expectation of another happy outcome.

Britney Spears was No 1 in the charts with 'Oops!...I did it again' and Tony Blair was the PM at 10 Downing Street as more than 20,000 Arsenal fans set off to Copenhagen to watch their heroes take on the team from Istanbul led by the wily Fatih Terem.

However, there had been violence before Galatasary's semi-final against Leeds United, where tragically, two fans from England lost their lives in the Turkish capital.

The fatal incident meant there was a feeling of apprehension surrounding the build-up to the match.

And the night before kick-off, there were clashes between the two sets of fans provoked by the Galatasary fans that ended with an Arsenal fan being stabbed.

On the day of the game there were serious outbreaks of violence that led to many injuries on both sides around the centre of the Danish capital - and it was to that backdrop the game took place on Wednesday, May 17, 2000.

Arsenal fielded a powerful side containing most of the legendary back five including David Seaman, Lee Dixon, Martin Keown with Tony Adams as captain.

In midfield was the hugely effective combination of Emmanuel Petit, Patrick Vieria, Ray Parlour and the flying Dutchman Marc Overmars, with the stellar pair of Thierry Henry and Dennis Bergkamp up front.

Galatasaray included the experienced Brazilian goalkeeper Claudio Taffarel, who played in the 1998 World Cup final. Also in the line-up was Hakan Sukur, who was to later join Inter Milan and Blackburn Rovers.

The talented Gheorgie Hagi - who fans nicknamed The Commander - was also in the team, alongside Gheorge Popescu, who had spent a season in the mid-nineties at Arsenal's arch rivals Spurs.

Despite the off-field woes, the scene should have been set for a feast of football. But the occasion seemed to overwhelm both sides.

Overmars' low shot forced Taffarel to make a diving save on 35 minutes. Sukur then found Erdem, who beat the offiside trap only for his shot to fly wide moments before half time.

Arsenal only had themselves to blame for the game heading into extra time after missing a number of chances they would expect to have put away.

With the game having the golden goal ruling, a strike in overtime would have clinched the trophy - but Henry had a number of shots saved by Taffarel.

Henry went close again but his shot from an acute angle flew across the goalmouth while Overmars missed another chance.

Then, at the start of the second-half of extra time, Keown blasted a shot over from close range.

As the match went to a penalty shoot-out not many Gunners fans held out hope as earlier in the season, the Premiership runners-up went out of the FA Cup at Leicester and the Worthington Cup at Middlesbrough on penalties.

And so it was to prove again as Galatasaray scored all four from six yards out, while Davor Suker and Viera missed their spot-kicks leaving Parlour as the only successful taker in red and white. The Turkish side won 4-1 on penalties.

With eight bookings and a sending off  - after midfielder Hagi was dismissed early in extra time for punching Adams - the game was one to forget for Wenger's men.

Galatasaray picked up the trophy to make it a treble that year after claiming their 14th Turkish league title, as well as the Turkish Cup.

For Arsenal - despite promising so much, they ended the season heart-broken and empty handed. Their 1994 triumph in Copenhagen is still their second - and last - European trophy.

Layth’s note: This final was one of my worst trips watching The Arsenal in nearly 40 years of support. My friends and I spent the early hours after the match phoning hospitals in Copenhagen trying to find one of our pals who had been hospitalised after we lost contact with him during the riot. Thankfully we found him and after a few days in the main hospital in the city and he came home with no real damage done.