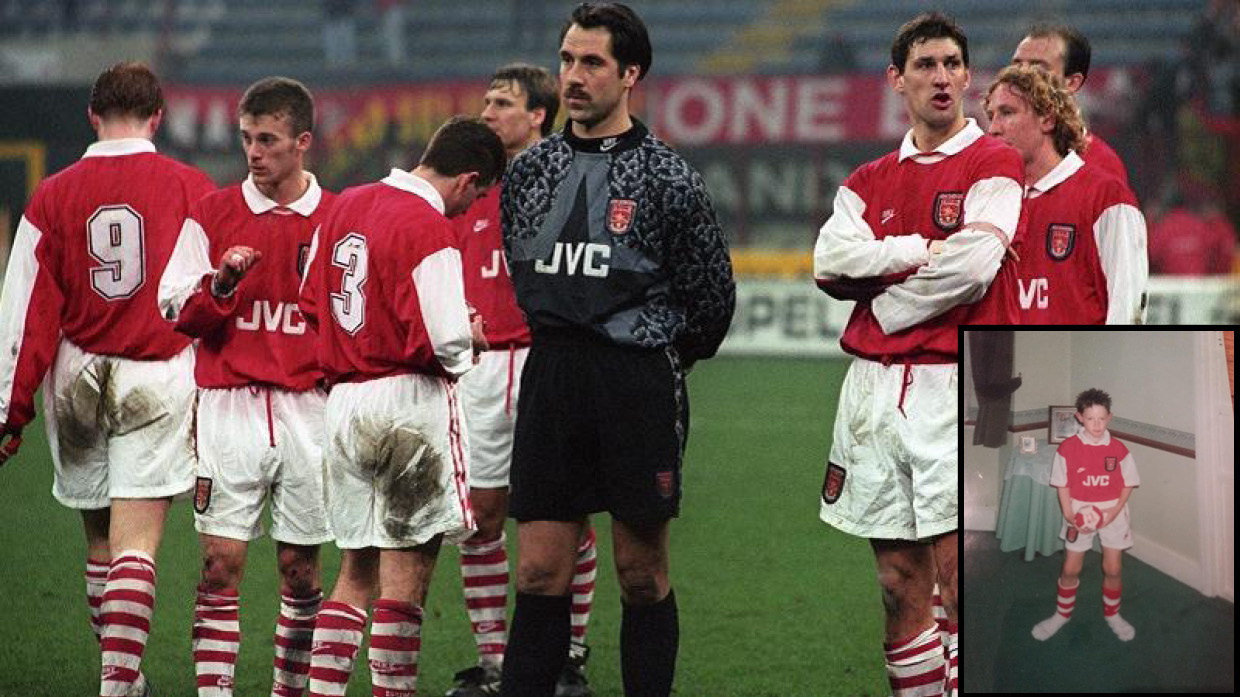 The first of a two part romance, set in Islington

Born out in Essex, the Cockney umbrella,
Where East London spills like a bottle of Stella,
And die-hard Hammers will throttle a fella
if you say the wrong team, most colossal of errors,
Might even end up with a knobbled patella,
So an Iron I was when the kit was bestowed,
Couldn’t know better, just 6 years old,
With footsteps to follow, opponents to clatter,
Spawn of Kevin, the Boleyn scrapper

The problem was, it was Nan’s at the weekend,
Where my love for West Ham gradually weakened,
Surrounded by Gooners and Sky TV,
Which was crushing for Kev, but nicer for me,
I have to admit, I still have a weakness,
A club with a history, Bubbles’ uniqueness,
A confusing array of romance and bother
with flowers up one sleeve, a tool down the other

But Arsenal it was, a club in ill health,
My very first season we struggled to 12th,
A famous back four, but George had been sacked
for allowing pound notes to fall in his lap,
Wondering why every fortnight we’re losing,
Everyone’s English so everyone’s boozing,
Merson’s impulsive, Brazilian skill
but midweek he’s bolted in William Hill
and Parlour and Adams, the rugged defender,
There’s no way around it, the boys loved a bender,
We nearly won something, I screamed at the time,
That fucker Nayim, from the halfway line,
My first dose of footballing anguish, however
I knew from that moment I’m in this forever

That was the Summer I fully committed,
Did my pre-season, red and white kitted
and read Fever Pitch, remarkably early,
Went over my head like the Arsenal jersey,
I learnt about Tottenham, their fans and their story,
Not to be trusted, Nanny assured me,
My first few games were all nil-nilling
Wimbledon, Coventry, utterly thrilling,
But thanks Uncle David, I’d sit with my tutor
and see Wrighty breaking Ogrizovic’s hooter

My first impressions, I don’t quite recall,
Just sat there in awe at the sight of it all,
Moved my head side-to-side with the flight of the ball,
Slighter and smaller than everyone there in
a land full of Bovril and screaming and swearing,
And like all nostalgia, the past is saluted,
Highbury was quiet, it can’t be disputed,
But like most libraries, had style and grace
and walls full of history inspiring the place,
The best part was, I was set to be smitten,
As my favourite chapter was yet to be written

It began with a Frenchman, it’s pretty straightforward,
He looked like an anorak, skinny and awkward
with ill-fitting suits draped over his shoulders,
Looked more like a teacher than Roy of the Rovers
but under that birds nest, behind those big glasses,
Was the brain of a gaffer, but also an artist,
He got to work quickly, changing routines,
Out went the Guinnesses, bacon and beans
and results were improving, we felt it intensely,
He inherited Dennis, which helped him immensely,
Bought Patrick Vieira, laid part of the root in,
Which wasn’t a bad way to start his recruiting

The 98 season, it all came together,
The feeling I got from Platty’s late header
or big Tone strutting, a sinner’s revival
having buried left footed to win us the title,
The timing was perfect, enshrined in emotion,
10 years old, in the prime of devotion
and you think that that’s it, let’s not be greedy,
You can’t wait to watch the Cup Final on TV
until on that morning, Mum’s on a caper,
She hands me a small rectangle of paper,
and ‘she can’t do this to me, she’s never this evil’,
You think it’s a wind up, that Jeremy Beadle
will jump out the wall like a plumber in hiding,
But he never arrives, and your Mum is still smiling,
So you throw on your strip, your face a bit trembly,
Then hop in the motor and race it to Wembley

Magical memories, me and my Mother,
Shutting up Shearer and seeing another
trophy get lifted, the cyclonic trails of
Anelka and Overmars, Sonic and Tails,
But torch bearer status was there for the taking,
And a skinny French kid called Thierry was waiting..