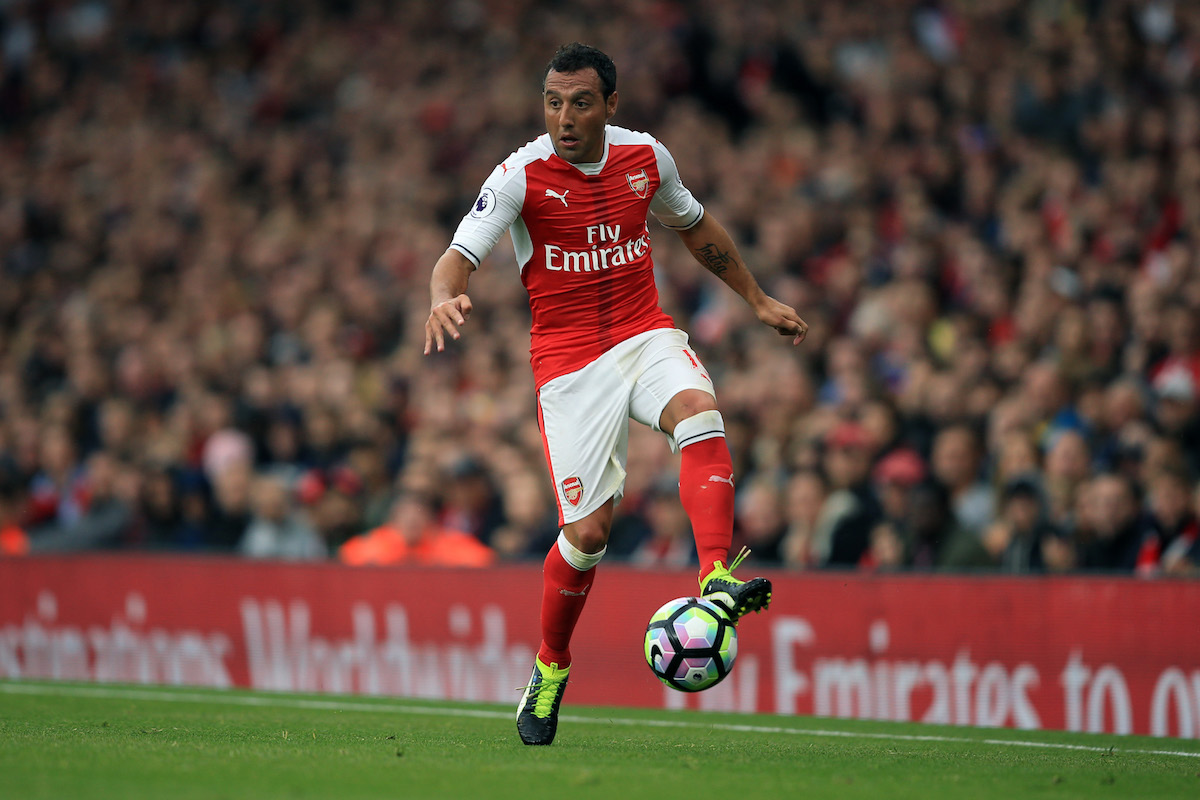 Santiago Cazorla Gonzalez joined Arsenal on the 7th August 2012 for a fee of 10m having spent one season at Malaga. Rumour had it that we had tried to sign him the previous summer however the notorious trolley dash of 2011 ended up not including the mercurial Spaniard. Malaga spent €21m on him and he impressed with 9 goals in 42 appearances as they qualified for the Champions League for the first time in their history.

Whilst right footed, Cazorla is almost as strong on his left foot and can takes corners or shots with either foot. Arsene Wenger even suggested he was not sure which was Cazorla’s stronger foot, so comfortable was he on either.

He made his competitive debut for the Gunners in the home clash against Sunderland where he collected the man of the match award. His first goal for the club came in the 2-0 win at Anfield on 2nd September. He followed this with a cracking long range effort in the 3-1 win at West Ham the following month.

He was quickly endearing himself to Arsenal fans and this bond was strengthened further as he hit our 4th goal in the comeback win at home to Spurs in November. A hat trick would follow at Reading a week before Christmas.

The New Year brought an exquisite back heel effort versus West Ham at home and the winner at Sunderland. A week after his strike at The Stadium of Light he scored both our goals in our 2-1 win at home to Aston Villa. He equalled a Premier League record in April by providing 4 assists in 1 game as Arsenal beat Wigan Athletic 4-1. He finished his first season with 12 goals from 49 appearances – an impressive return.

The following campaign he had to wait until November for his first goal as he opened the scoring with a sublime effort in a 2-0 win at home to Liverpool as Arsenal led the table until February. He added a brace against Fulham at the Emirates in the new year and whilst his overall goal return was down on his debut season (7 goals from 46 appearances) he most important strike would help the club end their 9 year trophy drought.

His nerveless penalty in the F A Cup Semi Final versus Wigan Athletic settled the spot kick shootout before Arsenal found themselves 0-2 down and staring into the Wembley abyss after just 8 minutes of the Final against Hull City. The Gunners desperately needed a lifeline and it was Cazorla who provided it when on 17 minutes he curled home a tremendous free kick beyond the reach of Hull’s goalkeeper, Allan McGregor. It was the trigger switch that turned the game as The Gunners fought back to win 3-2 in extra tine.

Arsenal were back at Wembley for the F A Community Shield game versus Manchester City for the start of the 2014/15 season and Cazorla was on target again in a 3-0 win. He took over penalty duties for the team and scored his first spot kick in the 2-3 reverse at Stoke and was on target twice the following week in the resounding 4-1 home win over Newcastle including one further penalty.

He scored from the spot in wins away at West Ham and Manchester City. Indeed his performance at the Eithad was extraordinary, scoring the first goal and creating the second from a free kick that was finished by Olivier Giroud – Santi famously did a little jig of joy on the pitch as the ball hit the net for 2-0 as he gave a masterclass in a superb victory at the home of the defending Champions. A week later he added another spot kick as Aston Villa were brushed aside 5-0. He finished the campaign with 8 goals from 53 games and more silverware followed as Arsenal retained the F A Cup with a thumping 4-0 win over Villa.

He started every game of the 2015/16 until sustaining a knee injury versus Norwich City at the end of November and did not feature again until the last match of the season as he was the architect behind a 4-0 thumping of Villa which earned him the man of the match plaudit. Cazorla appeared only 21 times and did not register any goals.

Sadly injuries would continue to take their toll in 2016/17, he played just 11 times yet still made an early mark in the season as he opened the scoring in the win at Watford from the penalty spot and a week later he converted an injury time spot kick to complete a come from behind win at home to Southampton. As I celebrated that goal with my better half (she has a soft spot for Southampton for family reasons and wasn’t that keen on my celebrations) none of us knew however that would be Santi’s final Arsenal goal. An ankle injury sustained against Ludogorets in October led to several surgeries and eventually a skin graft. Santi was told by his doctor to ‘just be grateful if you walk again’ at one point.

It is to Santi’s remarkable credit and determination that he has managed to rebuild his career despite his doctor’s grim summation. He rejoined Villareal and in 2018/19 featured 46 times and scored 7 times and at the time La Liga was suspended due to the Coronavirus pandemic he had already scored 12 goals from 29 games – a superb return especially given the fact that Santi turned 35 in December.

The diminutive playmaker made 180 appearances in total contributing 29 goals and registering 35 assists in the Premier League alone.

For me Santi remains my favourite player of the last decade, a match that we won featuring a goal from him made me feel the same way that Dennis Bergkamp, my favourite all time Gunners player made me feel and I cannot think of a higher compliment I can pay. I hope Santi gets the chance to say his proper goodbyes to the Arsenal faithful and I for one will ensure I am there to witness it in person.