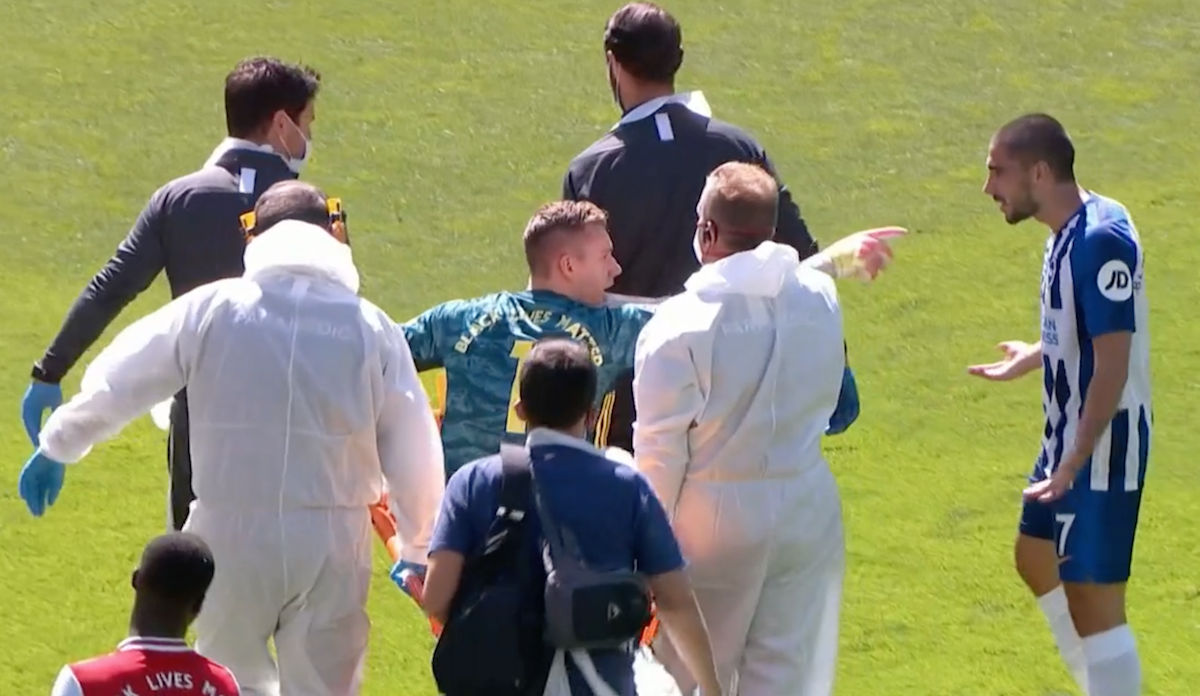 Oh dear. Arsenal clutch defeat from the jaws of victory. Once again that old chestnut about why you wouldn't trust the Gunners to take your dog for a walk comes to mind. They can’t hold a lead. Ahead in 13 Premier League matches this season, only six have finished in victory. So it was at the Amex yesterday.

They dominated possession and goal attempts, should have scored long before an otherwise anonymous Pepe gave them the lead with three quarters of the game played, and then conspired to present their hosts with their first win in 2020. Graham Potter’s team had been struggling for goals before lockdown but managed two against Arsenal’s defence. The equalizer was particularly damning.

To return to kick off, before it all went wrong, and there were changes from Wednesday’s starting eleven. Lacazette and Pepe joined the attack. With Xhaka injured, Ceballos started, whilst in defence, Rob Holding got the call, with Sead Kolasinac coming in for Kieran Tierney. It was a good enough team to beat a theoretically struggling Brighton. Saka played some of the game in Mesut Ozil’s position (the German being on the bench), although at times switched to the left when Aubameyang drifted into the middle. He didn’t have a bad game when in possession, but had a major role in Brighton’s equalizer.

Following on from the loss of Xhaka and Mari at Manchester City, Bernd Leno joined the injury list after a shove from Neil Maupay. It was a freak accident. Maupay had no need to challenge Leno, but it’s the type of thing we see all the time in Premier League matches. If Lacazette had done it to the Brighton keeper, who had a good match at the other end, we wouldn’t be calling for his head. It was unfortunate, but certain of the Arsenal players – Guendouzi specifically, decided the make a thing of it. There is no comparison between Maupay and Ruud van Nistelroy when it comes to cynicism.

Arsenal did create some very decent chances – Saka hit the bar, and aside from several shots on target, Aubameyang was a whisker offside before his side took the lead in the second half - and eventually the goal came with a sumptuous strike from Pepe. But could the team hold out? After 75 minutes a set piece calamity. Ceballos and Lacazette not quick enough to close down a short corner, although the original sin was Saka’s slowness to move out with the defensive line which would have cut things dead with an offside call. From there on it was pinball in the Gunners’ goalmouth and Lewis Dunk did enough to get the ball over the line in blocking Rob Holding’s attempted clearance.

It got worse with Brighton’s injury time winner, although in fairness it was a well-worked goal. Arsenal should have made the game safe long before Pepe’s goal, but it wasn’t to be. The Seagulls have now done the double over the Gunners this season, which says it all about how far things have fallen at the club.

In the short term, Emiliano Martinez will get a run in goal and it would be harsh to criticize him for either goal yesterday. He made a couple of very decent saves. Elsewhere, Arteta is running out of options. Guendouzi could get a ban for grabbing Maupay by the throat post game. That would bring in either Ainsley Maitland-Niles or Joe Willock to partner Dani Ceballos. It’s not a midfield to strike fear into the hearts of any opposition. It has to be worth a look at Martinelli as part of the attack. He has a good understanding with Saka.

Arteta’s biggest problem seems to be motivating his players to do the unglamorous stuff. There didn’t seem too much intensity yesterday. Could be the lack of crowd, but the results even before the break and the club’s position in the table below lesser spenders including Wolves, Leicester and Sheffield United points to a lack of hunger. I have no idea where things will go from here, but Champions League qualification can probably be forgotten by those who still had any hope before yesterday’s calamity. There is a chance of Europa League football, not least because it is likely one of the top seven sides might win the FA Cup and Manchester City are banned from Europe next season. But with Arsenal’s run in and injury list, I wouldn’t be too confident they can even finish eighth.

These seem like dark days at the moment. The club cannot seem to even secure young talent like Saka for the long-term. It feels like a gradually sinking ship, stuck in the mud and getting more entrenched with every passing year. Arsenal have been in gradual decline ever since they left Highbury. There was a real spark of something in 2008, but the club were undone by a lack of experience, too many old hands let go a little too earlier than they should have been to make way for Arsene’s beloved youths. Arsenal have been trying to recover ever since, but ultimately, there is something missing, a spirit glimpsed all too rarely (think Chelsea away this season). How to get this back as a hallmark of the team? Answers on a postcard to Highbury House.