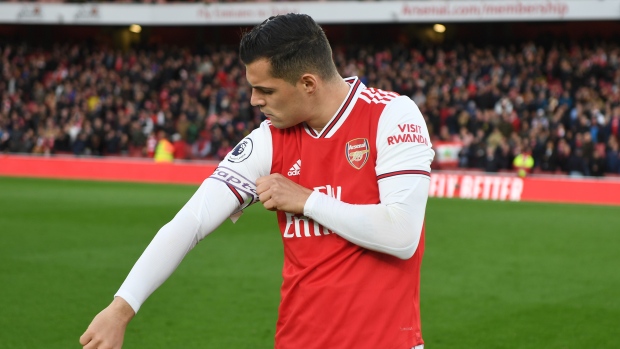 How has Granit Xhaka turned his Arsenal career around? CREDIT: OFFSIDE

When Xhaka finished a fine move by lashing the ball into the Norwich net at the Emirates on Wednesday evening, the emotions of a tough 12 months were clear for all to see in his celebration.

With Unai Emery’s reign in its dying days, his skipper Xhaka became of the target of the revolters as he was booed off during a 2-2 draw with Crystal Palace. Off came the armband and then the shirt which hit the floor on his way down the tunnel.

The 27-year-old was stripped of the captaincy and as Emery’s empire continued to crumble around him, Xhaka was nowhere to be seen as Bundesliga side Hertha Berlin offered him an escape route.

In most revolutions, a young leader takes the helm to try and offer hope of a brighter future to their people. That's just what happened at the Emirates.

With Emery ousted, Arsenal turned to Mikel Arteta, and that’s where Xhaka’s hope and redemption begins.

Arteta immediately convinced the midfielder to stay and lavished him with praise, saying: “The way we want to play, if we get him on board he can be a tremendous player for the football club.

“It is everything – his commitment, I like the way he is, the way he lives, his professionalism, and the way he trains.”

It appeared Arsenal’s new boss had found a general to help guide his new regime, and Xhaka has gone on to become a key figure under Arteta, starting all but three games since his December appointment.

The midfielder has even pulled on the armband once again as he led the Gunners for the final 10 minutes against Norwich.

It’s been a remarkable turnaround for the Swiss international, with many questioning if he’d ever play for the club again following his tantrum against Palace in October.

But, just how has Xhaka redeemed himself?

Firstly, the belief and trust placed on him by Mikel Arteta seems to have galvanised his career as he continues a run of form that is arguably his best since joining Arsenal from Borussia Monchengladbach in 2016.

Secondly, the midfielder appears to have matured. Having been through the toughest spell of his career and become a father, Xhaka has had to grow up and learned fast. As Swiss poet Hermann Hesse once said: “Youth ends when egotism does; maturity begins when one lives for others.”

Thirdly, at 27, Xhaka is approaching his peak and seems to have finally found his feet in the Premier League. Whether he is the long-term answer for Arsenal’s midfield remains to be seen but he will certainly be key for Arteta in the coming weeks.

Xhaka’s Arsenal story is one filled with highs and lows, but it seems through the strife he has finally discovered who he is. Some fans may believe his redemption is far from complete, but he’s certainly on the road to it.