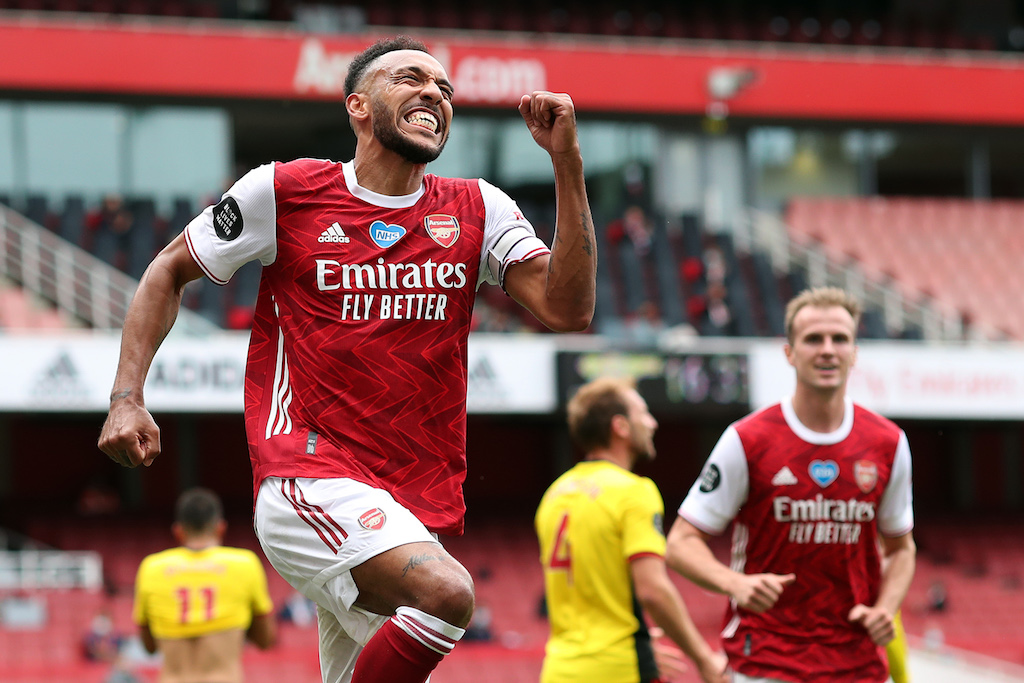 Arsenal captain Pierre-Emerick Aubameyang celebrating at the Emirates after scoring in the final Premier League match of the season against Watford on Sunday. CREDIT: OFFSIDE

Arsenal will have to be significantly better at Wembley on Saturday than they were at home to Watford on Sunday if they want to win the FA Cup again.

Following the joys of the display against Manchester City in the FA Cup semi-final, our last two matches have only posed the same old questions we associate with this particular Arsenal team. It must be a nightmare being their coach.

Whisper it quietly but Arsenal really miss Shkodran Mustafi in the defence, or at least David Luiz certainly does.

In his own way Mustafi is one of our players of this ridiculous football season. Since the switch to three centre-backs he and Luiz have very much come into their own. While we’ve been sadly robbed of the chance to see how Pablo Mari would have settled in on the left – he would certainly have been a better option than Sead Kolasinac.

Arteta’s insistence on having a left-footed centre-back has seen Sokratis strangely ostracised completely. All of which begs the question of why the boss chose to ditch his third central defender for the visit of a team who we knew would be going all out to win yesterday?

Rob Holding, perhaps even more than Mustafi and Luiz, needs to be part of a back three. His weaknesses were badly exposed yesterday and Luiz regressed back to the figure of fun we’re often more familiar with. Olivier Giroud and his mates will be licking their lips when Frank Lampard shows them the video of Arsenal from yesterday - while hoping for the same formation.

Perhaps it was understandable a number of players might not appear entirely focused during the disjointed 3-2 victory over the Hornets - but I was surprised at the team Arteta fielded given the risks of injury and suspension ahead the Cup Final.

As it happened it was only the fact Emi Martinez and Pierre-Emerick Aubameyang were playing that saw us scrape a win that was scarcely deserved despite racing to a 3-0 lead.

Ainsley Maitland-Niles, deployed surprisingly ahead of Cedric Soares at right-back, certainly passed his audition for Saturday and will be thoroughly deserving of his place against Chelsea, if it were ever in any doubt after the semi-final.

Joe Willock on the other hand failed to grasp his chance and was largely anonymous – where is the young tyro who burst on to the field in Baku in the Europa League Final last year?

The only other player who really made a pitch for a starting berth at Wembley was Reiss Nelson who did the one thing I’ve been wanting to see him do all season and took on his man for skill and pace.

Nelson had done more inside two minutes on the field than Nicolas Pepe has largely done for most of the season in terms of genuine wing play. It probably won’t be enough for Nelson to get the nod on Saturday but he may well be the first man turned to from the bench instead. I’d certainly like to see him running at Alonso who is often as far out of position as any Arsenal defender.

As with the semi-final Arsenal will have to be at their absolute best and with 100 per cent commitment if they are to beat Chelsea on Saturday.

We know they are capable of it but can they do it with Holding and without Mustafi up against Giroud/Pulisic and co? Let’s remember that we owe Giroud for his behaviour after the Europa League Final.

If I was Arteta I’d use that as my motivation for the team and then send them out there to play like they did against Manchester City. That is how we can win. And make no mistake, after a complete write-off of a season this really is the only light at the end of a long tunnel.