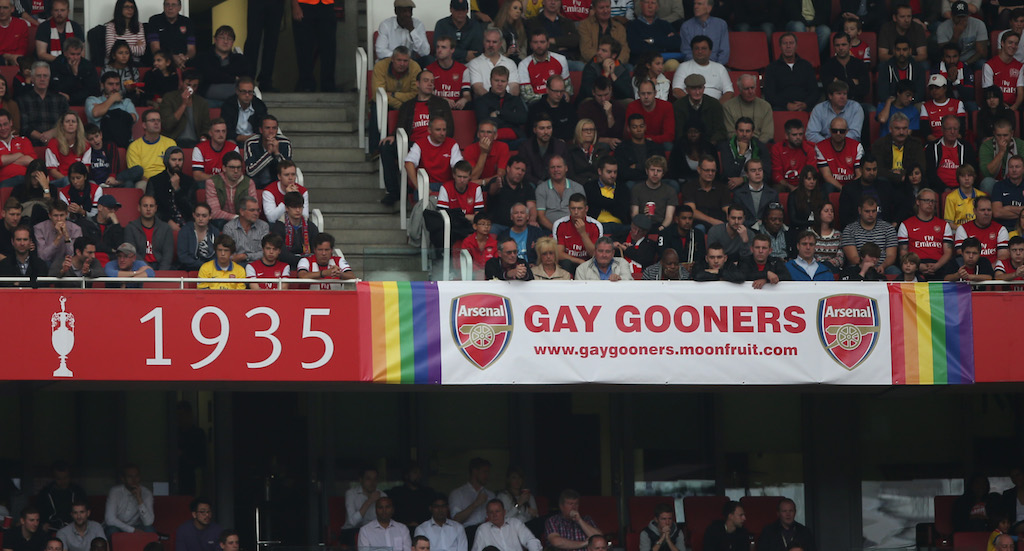 The Gay Goobers are the largest LGBT+ supporters’ group in the country with more than 900 members in all seven continents. They were founded in 2013 as part of a wider effort to tackle homophobic chanting and general attitudes in football that can make the atmosphere at football a hostile and intimidating one for LGBT+ fans. CREDIT: OFFSIDE

We at Gay Gooners were beyond excited when we were offered a column with The Gooner, a fanzine that a number of our members have been buying for many years and one that I’ve personally always found to be hilarious and hit some hard truths with the same hammer.

However, I’d be lying if I didn’t admit I hit something of a writer’s block coming up with something for our first entry. There’s so much I could touch on about what caused us to have what was, let’s face it, such a dismal season but I feel the subject has been done to death by people who are far more qualified to comment on our defensive issues and stingy owners than I am.

Instead I thought I’d start writing straight from the heart about why I and many other GG members are longing for the days when we can safely get back to the Emirates and back to away days as far afield as Newcastle (or even further depending on Saturday’s FA Cup Final result).

Firstly though, a bit of background about our group. We’re the largest LGBT+ supporters’ group in the country with more than 900 members in all seven continents.

We even have a member stationed in Antarctica - that’s Arsenal’s global reach for you.

We were founded in 2013 as part of a wider effort to tackle homophobic chanting and general attitudes in football that can make the atmosphere at football a hostile and intimidating one for LGBT+ fans.

Like all official supporters’ clubs, we have a ticket sharing scheme that in our case has helped us to get members who had previously been uncomfortable attending matches, back into the ground safe in the knowledge that they are surrounded by a friendly and supportive group of fans.

It is this that brings me on to the main point of this article. I miss football. It’s been nice having the league back on the tele for the most part and Gay Gooners wise, we’ve been able to have regular catch ups via zoom. I also recognise that above all else we have to keep ourselves and our loved ones safe and keep this ghastly virus under control.

Nonetheless I’m still missing real football, because we all know it’s not the same without us fans there.

My family have had season tickets at Arsenal since long before I was born, but my away form so to speak, had suffered. I could never get my head around the away credits catch-22 in which you need away credits in order to get tickets to away matches, but you need away tickets to get those credits.

I joined Gay Gooners in July 2018 and soon after was attending an away match with the group. I brought the ticket off of our current treasurer and in-house expert on all things ticketing, Angus. It was a 3-2 victory against Cardiff at the Cardiff City Stadium.

The last away match I got to before lockdown was our 1-0 victory in Athens against Olympiacos, which unfortunately set us up for a disastrous home leg.

I can’t go into too much detail about that trip because one of the lovely Athens sports bars thought it would be a good idea to give us free shots of ouzo, so frankly I don’t remember much.

But going to watch Arsenal, whether at home or away, is about so much more than the 90 minutes of football.

You all know what it’s like going to the football with your friends. Getting up at stupid o’clock to get an early train up North for a 12:30 kick off. Going to your favourite pub around the N7 area, where a pre match pint turns into 5. Standing or sitting together and milling over your frustrations or on those better days, losing all concept of one another’s personal space when we score a last-minute winner.

Gay Gooners offer our members regular socials, a monthly newsletter and match tickets. But above all else, we offer friendship.

We’re a supporter’s group of very different people from very different backgrounds. We have members from all over the world, some are gay men, some lesbian woman, some are transgender men and women or gender nonconforming people.

Some aren’t even LGBT+ themselves, they may be the children of same-sex parents or simply straight allies supportive of our cause.

In the case of many of our members, there is only one thing that unites them and that is their undying love of Arsenal.

I am missing live football. I miss the click of the turnstile, the smell of Bovril and burgers in a packed concourse and chanting a loosely rhymed chant about an in-form player. I’m missing the cricket club that we drink in before playing Burnley, working out a ridiculous route to get to whatever far-away land we’ve drawn in the Europa League and I even miss not being able to see anything at Anfield.

But most of all I’m missing my friends.

Stay safe and I hope we’ll be back soon.