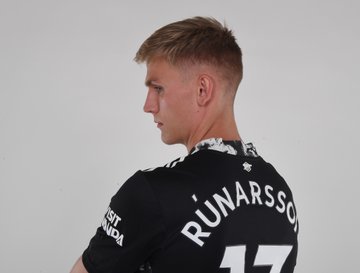 Signed from Ligue 1 side Dijon earlier this week, the Icelandic goalkeeper is set to make his Arsenal debut. He will be hoping to emulate Emi Martinez's heroics after replacing him as second-choice at the Emirates.

The Frenchman is set to make his highly-anticipated debut at the King Power and he will have to be at his best to keep a handle on Leicester's lively attackers. Saliba will be hoping to impress and earn more first-team minutes.

The Brazilian's experience will be key alongside Saliba and with him seemingly relishing his leadership role under Arteta, he will help guide the youngster alongside him through the game.

With Kieran Tierney injured and Gabriel Magalhaes likely to be afforded a rest, the Bosnian could start in the back three. Kolasinac will need to improve on his performance against West Ham if Arsenal are to go through.

The versatile Englishman should return to the team after being named on the bench on Saturday, and the Gunners will need him to get forward and help create chances for the attacking players ahead of him.

Saka will be asked to get forward like Maitland-Niles down the opposite flank, but he will have to do his fair share of defensive work with Kolasinac behind him.

The Egyptian could be an important squad player for Arsenal this season and he will feature regularly in the cup competitions. Elneny will need to get on the ball and control the game if Arsenal are to advance.

The Swiss has become such a key player under Arteta that he is unlikely to be rested in the cup competitions. He will need to get a firm grip on the game alongside Elneny.

After being named on the bench for both Premier League games this season, the Ivorian will be keen to impress and will fancy his chances against Christian Fuchs if the ageing Austrian starts at left-back for Leicester.

The youngster has been linked with a loan move away from the Emirates over the past week, but with other attackers injured and Arteta likely keen to rest his key players, Nelson could get a chance to impress.

Nketiah will get the chance to prove his worth once again and he will go into the game full of confidence after his winner against West Ham on Saturday.