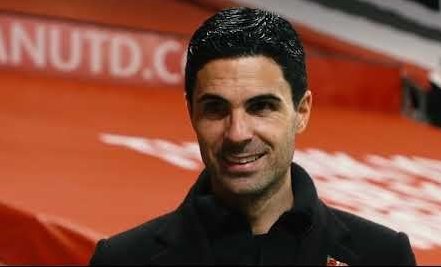 Arteta - Won the tactical battle against Solskjaer hands down

There was a key tactical masterstroke in the minutes before this match kicked off. A decision that led to an Arsenal victory – their first away against one of the fellow (so-called) top six clubs since the visit to Manchester City back in January 2015. Notified by a friend that Mike Dean would be taking charge of proceedings, your author stuck £20 on a home win. A surefire banker, the kind I often place on PowerPlay when there seems to be no possible alternative outcome. Thank me later.

Mikel Arteta also made some big calls ahead of this fixture. In 2015 at the Etihad, one suspects more by accident that design, Arsene Wenger combined Santi Cazorla and Francis Coquelin in central midfield and found an unlikely winning combination. It served the team well, although Cazorla’s injury in the autumn of 2015 ultimately put paid to what might have been a first league title since 2004.

Fast forward to November 2020, and who could have foreseen it would have been such a long wait to take three points at the ground of another big club. Equally, who could have predicted that Mohammed Elneny, of all players, would be one of the star performers when it finally happened. He joined Arsenal in January 2016, during Mikel Arteta’s final season and I think it’s fair to say that overall he’s been pretty underwhelming. He’s come back into the picture this season after Unai Emery sent him on loan to Turkey in the summer of 2019.

When Arteta arrived back in December of last year, he stated that every player had a clean slate. Elneny has had to wait until his opportunity to stake his claim arrived and with the signing of Thomas Partey, it felt like he would be playing most of his matches with the shadow team that turns out for the cup competitions. However, the performance of Granit Xhaka in the defeat at home to Leicester evidently persuaded the manager to assess his other options and he struck gold at Old Trafford. The pairing of Partey and Elneny offered the team a good combination both supporting attacks (Partey’s distribution was eye-watering in quality) and aiding a defence that did a pretty good job of nullifying United, especially the outstanding Gabriel. Mustafi was also left out after his own aberration in the build-up to the Leicester goal last weekend, ball-watching as Jamie Vardy ran into position to finish the move.

Looking at the starting eleven, I was happy enough. Willian for Pepe I could accept, Saka starting at left wing-back, Holding and Tierney either side of Gabriel. Granted, at centre forward there are limited options, especially with Martinelli unavailable. Alex Lacazette hit an air shot in the first half, although replays did show a slight deflection on the pass that gave him a little mitigation. It was encouraging to see Arsenal dominate the opening 45 minutes, but the frustration of their being unable to turn that into a lead cast doubts. However, as much as anything, this match demonstrated the gap in the ability to tactically organize and motivate a group of players that exists between Solskjaer – who has had years to get it right – and Arteta, still a novice as a first team manager. How long United can persist with Solskjaer is one for debate, but I would be highly delighted if he remained in post until the teams next meet at the end of January. It would effectively eliminate the club from the contention for a cherished top four spot.

It would be untrue to say United did not have chances, and there was certainly fortune when the ball cannoned off Leno’s head onto the post, but one stat that does bear looking at is that Arsenal have the best defensive record in the division, and that after playing away to Liverpool, Man City and Man Utd. Seven goals conceded in seven games indicates there is certainly an element of the George Graham about Arteta, with only nine scored. And yet, he insists on his team playing out from the back, so this is not a percentage tactic to minimize the time the ball is spent in their own third. Sure, the lack of goals is a concern, but after season upon season of poor defending, it is a relief to see something of an Arsenal tradition come back into the equation.

I never thought I would say this, but credit to Mike Dean for reffing the game responsibly. A real turn up. He could easily have waved away the penalty shout and just as easily given Gabriel a second red card early enough in the second half for it to matter. COVID-19 has a lot to answer for, but another stat worth highlighting is that there have been five penalties given to the opposition at Old Trafford in the last seven league games. Prior to that it took 101 league matches to reach the same number. And they say refs aren’t influenced by crowds.

Aubameyang broke his own non-scoring run and converted the penalty. I always get nervous about Auba’s spot kicks after that injury time fiasco against Spurs at Wembley. Fortunately David de Gea went the wrong way and Arsenal took a deserved lead with a little over 20 minutes remaining. The Gunners have played some poor United sides at Old Trafford in the years since Alex Ferguson’s departure, but never taken anything more than a draw. Some FA Cup wins have compensated a little, but this monkey on the back with regard to playing away against this level of opposition had to go and Arteta, admittedly after several attempts has finally seen it off.

It was a much-needed win after the defeat at home to Leicester had made it three League defeats in four games. The early season momentum was in serious danger of being lost completely, but the fitness of key players in defence, allied with the inspired pairing of Partey and Elneny gave the side the look of one with something beginning to resemble a spine. Yes, the centre forward position is still a conundrum, one that may need to be solved in the transfer market unless Martinelli really comes good, or Arteta switches things around and moves his captain into the middle. Still, Arteta’s problems are small fry compared to United’s, 15th in the table with an expensively assembled cast of characters and a manager patently not up to the task, much-loved as he may be.

After the visit of Molde (ironically Solskjaer's previous employers), Arsenal need to put right the home defeat by Leicester against another Midlands team, as Aston Villa visit the Emirates. It will be interesting to see whether he continues with the Partey-Elneny combination for a home match, or saves it for away trips where the opposition are likely to be more adventurous. Personally, I wouldn’t break up a winning combination. There are enough cup games to keep Xhaka and Ceballos fit. More important in the fitness stakes though are Holding and Tierney, both injury prone. Their continued availability may be key. If Arteta can put out the players that he wants to, we can see more performances like the one on Sunday. And if he can’t… the depth simply isn’t quite there as yet.

So still very much a work in progress, but with every passing match, the transfer window that ended in October is looking more and more successful.

To be notified when there is fresh content on my recently launched Arsenal blog (generally the day after matches), follow me on Twitter@KevinWhitcher01.