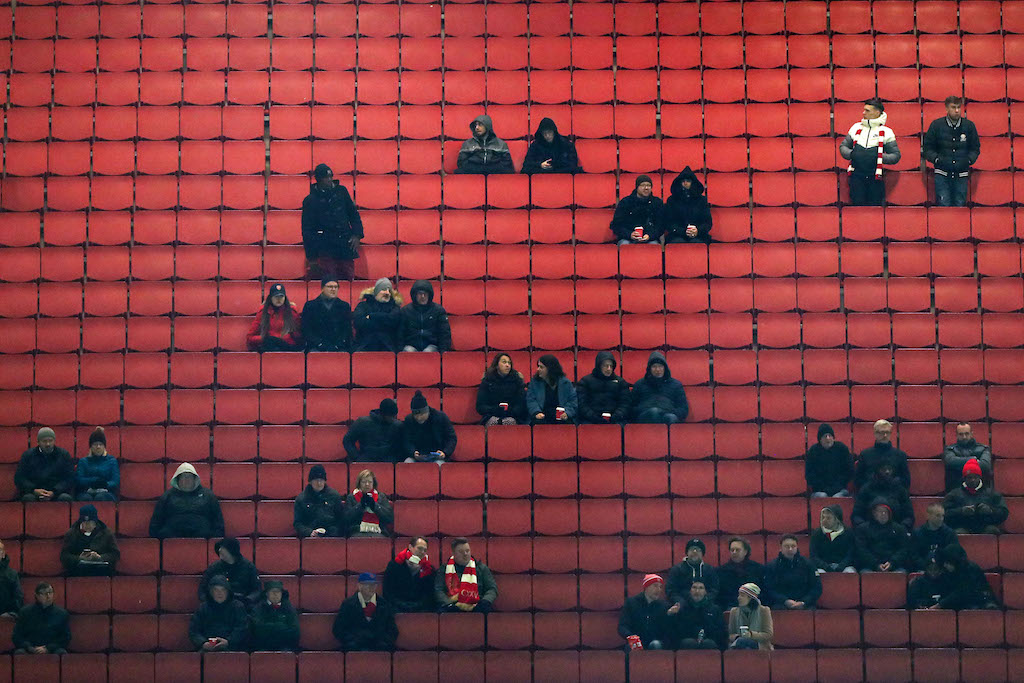 Supporters returned to the Emirates on Thursday. PICTURE: Arsenal fans at the Emirates taken before the Covid crisis

Not that any of us were doubting it, but we once again proved that the group stage matches of the Europa League hold no fear for us.

A 15 point haul from just five matches in the competition, a figure two higher than in the same column in the Premier League table after double the amount of games.

Mikel Arteta may have a number of huge problems to solve but it must be much easier to sleep on Thursday nights, than at the weekends.

It wasn’t really a problem he inherited either, with this being our fourth season in the continent’s second-tier of midweek action and us now showing 55 points from a possible 69 in the group stages after the win against our Austrian opposition.

Rapid didn’t really put up much of a fight in front of a fortunate set of 2000 fans that were returning to the Emirates for the first time since a league fixture against West Ham way back in March.

Those fans were treated to a decent professional performance by a heavily rotated first XI.

A 4-2-3-1 formation gave us plenty of options going forward. Nketiah leading the line with a hard-working Lacazette in behind.

It was a decent performance from the evening’s captain, starting with the opening goal of the game on 10 minutes. He thrived with the movement of the youngsters around him, but you’d doubt he’d be a long-term option there in any kind of tough league game where you’d expect him to have his legs tested.

The Frenchman has been much maligned in the last year or so, but has continued to work hard. His withdrawal with nearly half an hour remaining suggests he’ll be involved in some way at the weekend.

Pepe continues to make amends for his red card at Leeds, serving his suspension while playing every minute of these matches. He was lively and caused the opposition plenty of problems.

Those of us watching on BT Sport were met with commentator Ian Darke constantly theorising with his co-commentator Karen Carney that the return of a handful of fans had been the contributing factor to an upturn in fortunes, but I’d wager it was more to do with the quality of the opposition.

Darke didn’t go two minutes without stating some kind of thoughts as to how this would impact the players but the one thing he did get right was highlighting the fan acknowledgement of Pablo Mari, scoring the second goal, and appreciation at a return to the pitch after his injury. He should be a decent back up option having now signed permanently and regaining fitness.

Nketiah made it three on half-time after being given a second chance to make amends for his original poor finish. An interesting stat at the break was that all 11 Arsenal players had made successful passes each in double-figures.

It must be the first time in a very long while that’s been achieved in a first half?

The Austrians had one threatening player, the Japanese international Koya Kitagawa, and he took advantage of some sloppy defending just after the restart. Although the best efforts of Kolasinac to make two desperate blocks shouldn’t be overlooked, with that kind of defending severely lacking in recent years at the club.

Ainsley Maitland-Niles was back in his best position in central midfield, a partnership with the deeper sitting Elneny allowing him the freedom to get forward and dictate in a more creative area. He did just that for our fourth goal of the night linking up with Pepe and finding sub Emile Smith Rowe who put away nicely.

In my opinion Maitland-Niles lacks the defensive qualities to play at the back, but showed – albeit against poor opposition – that he’s certainly worth a go in a midfield pairing. With the likely absence of Thomas Partey on Sunday I’d like to see him join Granit Xhaka in the middle of the park, but it’s unlikely Arteta will be so bold.

In all this was a good run out for the fringe players in the squad. There were plenty of smiles and a real sense that even after such a poor league run there’s still a togetherness and belief in our squad.

The Europa League has really helped us not to dwell on any extreme negatives this season.

Without it our form line since the end of September would read LDWLLWLDL, sticking five more Ws in there certainly makes our current predicament slightly more palatable.

I’m reliably informed we haven’t had to travel to our bitter rivals up the road with them sitting top of the league since January 1961.

Chelsea beating Leeds on Saturday will ensure that run keeps going for a while longer. Mourinho this week suggesting Harry Kane wasn’t fit was some kind of kidology rumbled by the fact he started his other trio of strikers in their Europa League game, a 3-3 draw with LASK.

They do look in good shape and pose a real threat but they’re also vulnerable too, especially at home, thinking back to their struggles against a poor Newcastle and letting West Ham back into a game they were 3-0 up in.

Arteta definitely needs to treat this game as a perfectly acceptable one to go with a defensive mindset, ignoring the fans that recently clamoured for more in attack, and we can’t allow for the kind of sloppiness that has seen us drop so many points in recent weeks.