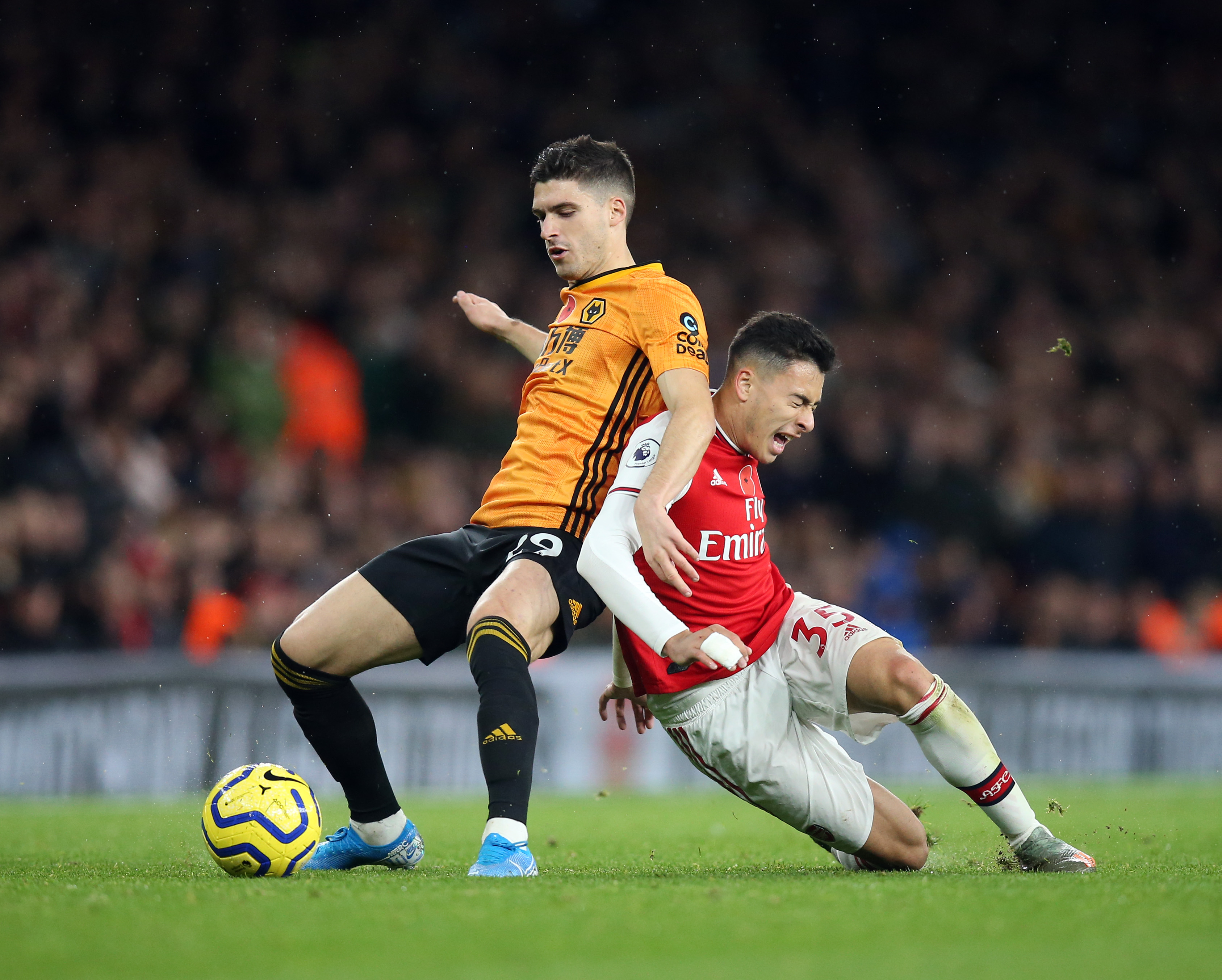 Here's Mark Rowntree's preview of the match as Molyneux following the Gunners goalles draw with Manchester United at the Emirates at the weekend:

Wolves have changed system and personnel this season, and are floundering after exceeding all expectations since their return to the Premier League in 2018.

With Diogo Jota and Matt Doherty fading memories make no mistake the pressure is beginning to build on Nuno Espirito Santo.

Since beating the Gunners in November in a game which will be remembered for the sickening head injury to star striker Raul Jiminez, Wolves have collected a mere six points from 11 games, plummeting from sixth to 14th in the Premier League table.

Their struggles at Molineux have seen them go under to Aston Villa (0-1), Everton (1-2), and meekly in the Black Country Derby to relegation-threatened West Bromwich Albion (2-3).

For broader context, Wolves are in exactly the same type of form as beleaguered Steve Bruce’s Newcastle United.

Following their latest defeat at the weekend at Crystal Palace, their manager has called upon the club to rediscover an ‘identity’, highlighting the need for a combined team effort in defensive duties. “We have a big challenge – we have to improve, and we have to improve fast,” he admitted.

The defensive aspect of the game has troubled Wolves, and their fans will no doubt be alarmed by the fact that their side has been on the wrong end of a pair of 4-0 defeats (West Ham and Liverpool) in the first half of the season, but scoring goals has also proved problematic in the absence of Jota and Jiminez.

The pressure of a £35m price tag has worn heavily on the shoulders of young striker Fabio Silva, with reinforcements sought in the shape of a loan deal for the Brazilian forward Willian Jose (from Real Sociedad).

Arsenal back on a positive trajectory

As Wolves urgently seek to rediscover some momentum, it’s clear that Mikel Arteta’s Gunners are heading back in the right direction after their own difficult start to the Premier League season, with further encouraging signs in the second half performance against Manchester United (0-0) on Saturday.

However, the squad still lacks depth and it’s arguable as to whether or not some of the fringe players are strong enough in terms of character to wear an Arsenal shirt, with the FA Cup defeat at Southampton an obvious example of the point. Caution should be heeded with Kieran Tierney, Gabriel Maghalaes, Bukayo Saka and Pierre-Emerick Aubameyang all recently absent from first team duty.

Positives are drawn from the red-hot goal scoring form of Alex Lacazette (took a blow to the head late in the game on Saturday), the growing creative influence of Emile Smith-Rowe and the fact that the Ghanaian powerhouse Thomas Partey is stringing together a run of games after recovering from injury.

In short, Arsenal are more solid and compact than earlier in the season and above all else have become difficult to beat, conceding just twice (Chelsea and Southampton) in the seven Premier League games since Boxing Day.

If coupling this with the fact that Wolves have drawn a blank in three of their last six Premier League games, and were reliant on a wondrous long-range strike to down National League North side Chorley in the FA Cup, a drab low scoring affair looks to be on the cards.

That said, with an eye to the future – Wolves have upcoming home games against Leicester and Leeds, and Arsenal also away at Aston Villa and Leicester imminently - both managers will be seeking maximum points from a very difficult to call fixture.

Gunners fans will undoubtedly hold out greater hopes for a positive result should the aforementioned trio be available, with an alternative attack of Willian, Gabriel Martinelli and Eddie Nketiah a concern.

Wolves were without the promising full-back Rayan Ait-Nouri, and the solid Moroccan Romain Saiss in defeat at Selhurst Park.