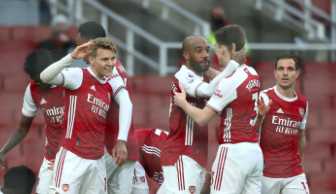 What a win! How good would that have felt in the stadium with fellow Gooners yesterday?

It was a tale of two strikers that didn’t turn up. Our own Pierre-Emerick Aubameyang who failed to show up for the squad call-time and was ditched from the line and England and Tottenham’s finest Harry Kane who barely touched the ball in an almost anonymous 90 minutes.

This game means so much to the fans that gambling with one of his transition stand-points of ‘nobody being above the law’ was an absolutely massive bet for Mikel Arteta in the build up to this fixture.

A bet that he deservedly cashed in. The fact that we hardly missed our tardy captain yesterday speaks volumes for the strength in our squad.

Delivering a message to senior players is something Arteta hasn’t been afraid of and he’s taken the task of reversing the ‘no consequence’ latter years of Arsene Wenger head on.

It’s certainly something Unai Emery also tried to do, but as soon as he showed a weakness in that his days were numbered. Arteta has been strong regardless of some setbacks, and it might just be what keeps him here and successful.

Again, I don’t think it pays to be all-in on either side of a supposed debate as to whether he’s the right man for us. This season has provided plenty of evidence for both sides of this argument to hang their hats on.

Even in the last five games there have been periods of matches where the evidence has fluctuated in sections of just a quarter of an hour. Football is a low-scoring sport in general which can produce over-analysis of many pivotal moments.

The final ten minutes yesterday seemed to be a product of our recent failings.

The sheer panic from knowing that we’d been architects of our own downfall in matches over the last couple of months ensured that we went into ultra-safe mode, despite having a man advantage.

Gabriel’s headed clearance was ultimately the difference between the two teams, but a 2-2 draw would have been incredibly harsh.

We controlled the game well and kept Tottenham chances to a relatively low level.

We put up with media and Spurs biased pundits questioning the officials in this game, but I can’t see what would happen differently if we played that game ten times over.

And while much has been made of our inability to find the net with any degree of frequency at home, Sunday marked the sixth match this season where a team in the current top eight came to the Emirates and registered 0 or 1 as their contribution to the scoreline.

That certainly has to point to an improvement in defence.

And how good do our group of youngsters look? Even if they had a very slight slope of progression it’s hard not to be enthused by how good some of them could be with a little more experience under their belts. Arteta’s management of them has been fantastic, something that shows in their humble, professional, but still engaging post-match interviews.

Arteta’s old club will win the Premier League this season yet something will always mask the joy of City and Chelsea fans when they celebrate any of the prizes they win following their huge injections of cash.

While it’s sometimes a little painful that our own foreign owner doesn’t stump up a portion of his billions to lift us back into the elite. Fans of those two clubs will never experience the joy of winning a title without that kind of assistance.

Even our last title winners ‘The Invicibles’ had just a fraction of the riches now laid on the table by the likes of Abramovich and Mansour. It means so much more.

That’s why those performances yesterday give the kind of excitement you can’t buy.

I’d take that over six or seven years of trying to lasso fourth spot and get into the Champions League with mercenaries.

Look out for a north London derby victory special from Alan this week, with part two to come tomorrow.