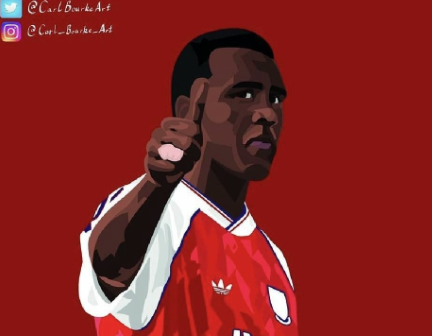 The late David 'Rocky' Rocastle and back cover of the Gooner Fanzine issue 286. Image by Carl Bourke Art. In a wonderful gesture by Carl, 100 per cent of the profits of this print will go to Great Ormond Street, a charity chosen by the Rocastle family

There are players whose star will shine forever in the skies above the Emirates regardless of whether those skies are stormy or calm.

Players who transcend the memory of even their own virtuosity and pride on the pitch because their reputation as men precede them, something which perhaps eclipses the relative smallness of football.

David Carlyle Rocastle was just such a man, and it remains an abiding source of fierce football pride and human thankfulness that we can proclaim him as one of our own.

Football made David famous, but without the stage it provided he would have been the same man, football merely offered us a window upon this beacon of decency and gave us the chance to witness one small aspect of his character and from it the chance to appreciate the wider man in all his fullness.

We watch a footballer for 90 minutes, perhaps twice a week, and we think we know them, but with Rocky I think perhaps we did, the determined, comradely, proud, and gifted young man we saw in an Arsenal shirt was David in microcosm: everything he did in that Arsenal shirt added to the lustre of a reputation which will last as long as those virtues remain respected.

Football is a game uniquely equipped to give rise to poetic pathos, such is the intensity of emotion which surrounds it, such are the memories it prompts – the relics of a history we share; and when we remember David it is within a framework of poetry, one which speaks equally of the joy of his smile, the brilliance of his football as it does the melancholy of his suffering and passing.

Football was the community I shared with him, an association lit up by him with that goal at Old Trafford, that goal against Middlesbrough, that goal at Aston Villa, that goal at White Hart Lane and much more besides. Alan Smith called him a ‘front foot player’, someone always seeking to make something happen; Perry Groves asserted he was the best player in his position anywhere; David Dein said he could have been Brazilian; and Tony Adams said he was simply a wonderful person: he was all of these things to us and much more to the family he left behind: his wife Janet, and his son Ryan and daughters Melissa and Monique.

In my lifetime Rocky was the third great No7, following on from Geordie Armstrong, and Liam Brady, men who would have been equally proud to rub shoulders with David, as David would have been with them for quality always acknowledges quality both with a football and away in private as just one of so many men and women in the street.

We are not an age short of people who aspire to be heroes; however, people like David Rocastle never needed to tell us why that description might apply to them for some people are born to be heroes, famous or otherwise. Their status is based upon their actions, their commitment, their principles, and their sense of responsibility to others: perhaps it is not so strange he became a great footballer, for they are the qualities the club he represented have woven in to their history; equally it is not surprising that he became a great human being – it is not what life throws at you which defines you but how you respond to it – indeed David Rocastle was a very great human being!

Rest in peace my hero and example for life.

(@GoonerFanzine back page issue 286)
In a wonderful gesture by Carl, 100% of the profits will go to @GOSHCharityas the charity chosen by the Rocastle family