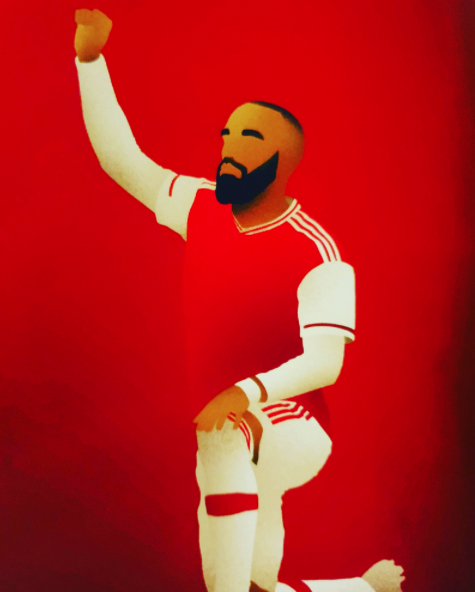 The back cover of the current issue of the Gooner Fanzine

Why do Arsenal always make it so difficult for themselves in the Europa League?

Of course, the Gunners coasted through the group stage with ease, but the knockout stages have been a very different story.

A nervy but exciting comeback against Portugese giants Benfica was followed by a more routine first leg against Olympiakos in Greece but then a dull 1-0 defeat that could have been much worse without the heroics of Bernd Leno.

Of course, events in Zagreb about thirty minutes later meant that this game was swiftly forgotten about for Gooners, but Europa League knockouts have made for tough watching so far.

Arsenal’s 3-0 defeat to Liverpool on Saturday night is a tough one to analyse.

A defeat to the Premier League champions, with that attack of Salah, Mane and Firmino, and the fantastic Diogo Jota coming off the bench, plus a midfield dominated by Thiago Alcantara and Fabinho, is not a crisis for Arsenal, nor a defeat that is a complete anomaly from the rest of this season’s Premier League results.

However, the Gunners never even looked like scoring, Partey and Ceballos were dominated and Martin Odegaard was completely silenced. Smith-Rowe and Saka were desperately missed, and the defence was taken apart in the second 45.

One clear feature of Arsenal under Arteta has been the Jekyll and Hyde nature of the performances, epitomised in the 3-3 draw with West Ham, one of the most blatant ‘game of two halves’ that you will ever see.

The same can be said of the North London Derby win, in which the Gunners were brilliant for 80 minutes until Erik Lamela was sent off and Spurs remembered they were 2-1 down, creating an incredibly nerve-wracking finish where Arsenal very nearly imploded.

The free-flowing, resilient and attacking Arsenal never arrived on Saturday, and Slavia Prague will be hoping for a similar performance from Arteta’s side.

Jindrich Trpisovsky’s Slavia side are 14 points clear (and unbeaten) at the top of the Fortuna Liga in the Czech Republic.

Their Europa League campaign includes group stage victories against Nice and Bayer Leverkusen before a 2-0 aggregate win against Leicester City and a thriller against Rangers in the Round of 16. All of this without key players Thomas Soucek and Vladimir Soufal, who were snapped up by West Ham for just £20 million in total.

Top goalscorer Abdullah Sima is reportedly on the watchlist of Mikel Arteta. Thursday night at the Emirates is the perfect chance for him to impress.

David Luiz recently had surgery on a knee issue, and will hope to play again before the end of the season.

Kieran Tierney’s injury in the Liverpool game means he is out for four to six weeks, which means Cedric Soares has to step up.

Emile Smith-Rowe, Bukayo Saka and Granit Xhaka all took part in full training in the build-up to the tie, a massive boost for Arsenal.

Thomas Partey looked shattered in the latter stages against Liverpool and Dani Ceballos had one of his worst games in an Arsenal shirt, so Mikel Arteta will have to consider both form and fitness in the midfield.

Slavia Prague centre back Ondrej Kudela is banned for the first leg after due to allegations of racial abuse against Rangers’ Glen Kamara, a former Arsenal U21 player, which UEFA are investigating.

The racism row has overshadowed their excellent form, with Kudela and his club denying all allegations.

With Kudela not playing for at least the first leg, it’s hard to contemplate the effect this will have on Arsenal, but with Kamara being a former player it may bring some added purpose to the game.

It’s Europa League or nothing for Arsenal now. The two English sides left in the competition are the clear favourites, with Manchester United on course for the final.

Slavia will allow Arsenal to have possession, and will plan to win the tie in the second leg in similar fashion to their victories against Leicester and Rangers.

The impetus is on Arsenal to build a fashionable lead, whilst avoiding any sloppiness in defence that may lead to a vital away goal at the Emirates.