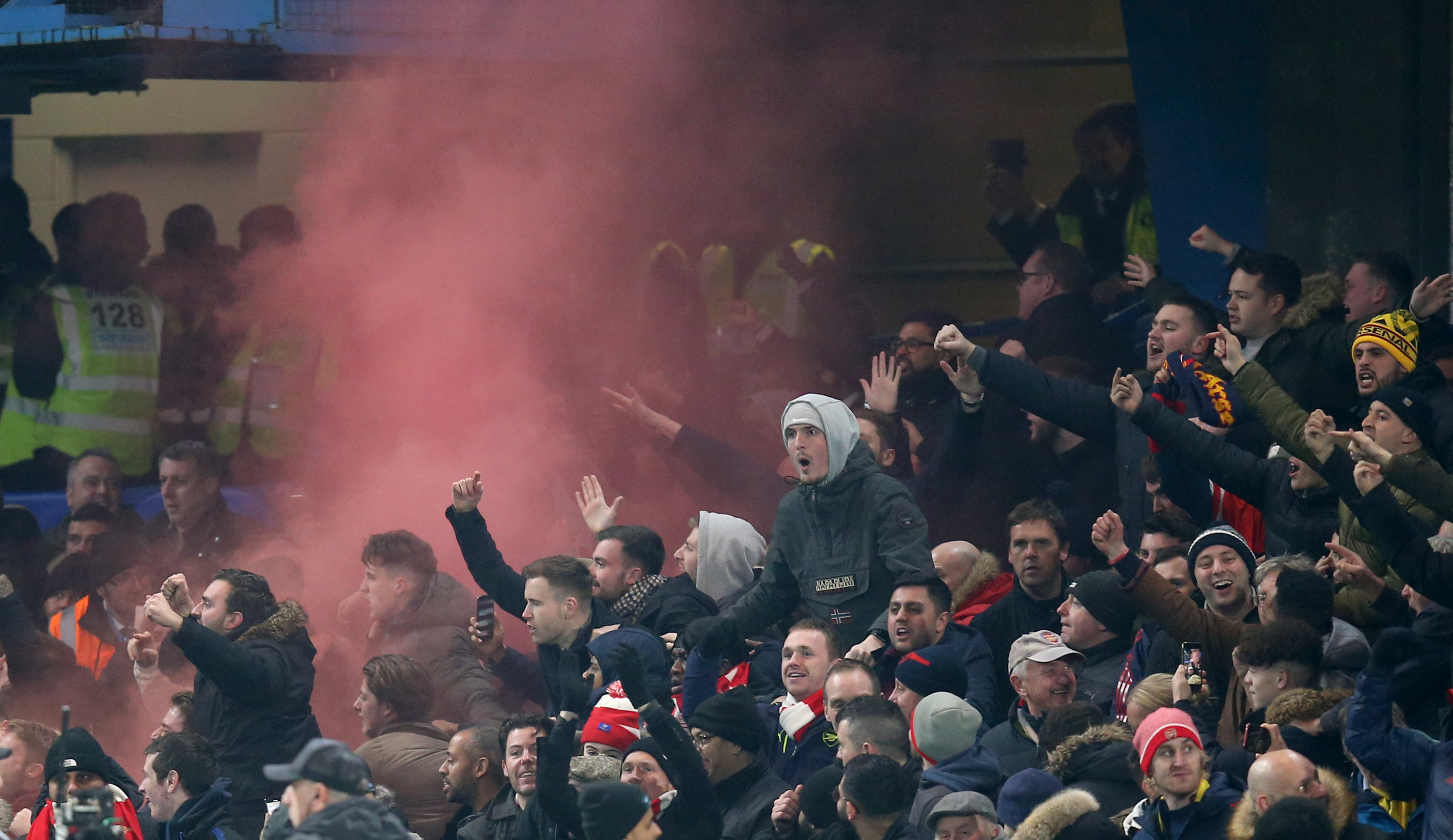 CAPTION: Gooners in the Stamford Bridge away end in January 2020, the night Gabriel Martinelli scored his wonder goal against the Blues

With the FA Cup Final a matter of days away, and a Champions League showdown with Man City on the horizon, Chelsea can be forgiven for not prioritising their midweek clash with the Gunners.
However, the Blues have found a consistent level since the arrival of Thomas Tuchel, and in recent weeks have strengthened their grip on a lucrative top-four finish. Faltering Leicester City are Chelsea’s opponents at Wembley on Saturday, and again next Tuesday in an important Premier League clash.
Thomas Tuchel expected to ring the changes

Chelsea rode their luck last weekend against a much changed Manchester City, and but for a cheeky panenka penalty miss from Sergio Aguero would have been dead and buried. However, they regrouped and took the game the Champions in waiting in the second half with a constant threat on the counter attack through Hakim Ziyech and Timo Werner. Tuchel is certain to rest some of his most influential players for this match.
He was quoted on Chelseafc.com as saying; ‘There is no other possibility than having a strong squad and it is all about the players.” A resurgent Timo Werner may step aside with either Olivier Giroud or the seemingly out of favour Tammy Abraham preferred, and given the way in which Matheus Pereira cut the through the Gunners defence on Sunday evening that’s probably welcome news for the Arsenal. Meanwhile Mateo Kovacic is back among the first-team fold as an unfortunate Thomas Christiansen replaces the Croatian on the injured roster.
A forlorn and frustrated figure on the sidelines
After their crushing semi-final defeat to Villarreal in the Europa League, Arsenal had every opportunity to simply go through the motions against beleaguered West Bromwich Albion However, there were positives garnered in the process of condemning Sam Allardyce and the Baggies back to the Championship.
That said, Mikel Arteta cuts an increasingly forlorn and frustrated figure on the sidelines with his body language speaking volumes that he’s lost patience with certain Arsenal players.
Truthfully the Gunners need snookers (and then some more) in order to qualify for European football next season, which will mean a lack of playing time for fringe members of the squad, and whether or not too many have recognised this fact is entirely questionable.
At the very start of the season, no-one would have predicted an Arsenal eleven with a fit and available Pierre-Emerick Aubameyang, Alex Lacazette and Eddie Nketiah consigned to supporting roles on the subs bench. However, that is the scenario which has unfolded as the Gunners play out a series of dead-rubbers against Chelsea, Crystal Palace and Brighton over the course of the next fortnight.
A youthful future for the Gunners

With Mikel Arteta or A.N. Other at the helm, it’s becoming abundantly obvious that the Gunners will turn to youth for the future. Game changers Bukayo Saka and Emile Smith-Rowe made their respective mark against West Brom, whilst a fit again Kieran Tierney has been a welcome addition. Furthermore, it is probable that there will be a more significant role in the squad for Joe Willock too, after his starring loan spell at Newcastle United.

Arsenal will doubtless seek to field their ‘strongest’ line-up for this fixture, with the aforementioned Alex Lacazette in contention to return.
However, we know fine well from the months which have passed previously that the Gunners ‘strongest’ side is nowhere near good enough.
With shrewd investment over a number of seasons - bankrolled by the Russian rubles of Roman Abramovich - Chelsea have amassed a deep and talented young squad which will be fully utilised by Thomas Tuchel towards the business end of the season.
Arsenal sparkled against Chelsea in the 2020 FA Cup Final at Wembley 287-days ago, but with Mikel Arteta’s stock diminishing by the week, that success feels like an absolute lifetime ago. With Chelsea in such rude health, revenge is on the cards.
Advice:
Chelsea; (8-11, various bookmakers)
Chelsea to win 2-0; (7-1, Bet365 or BetVictor)