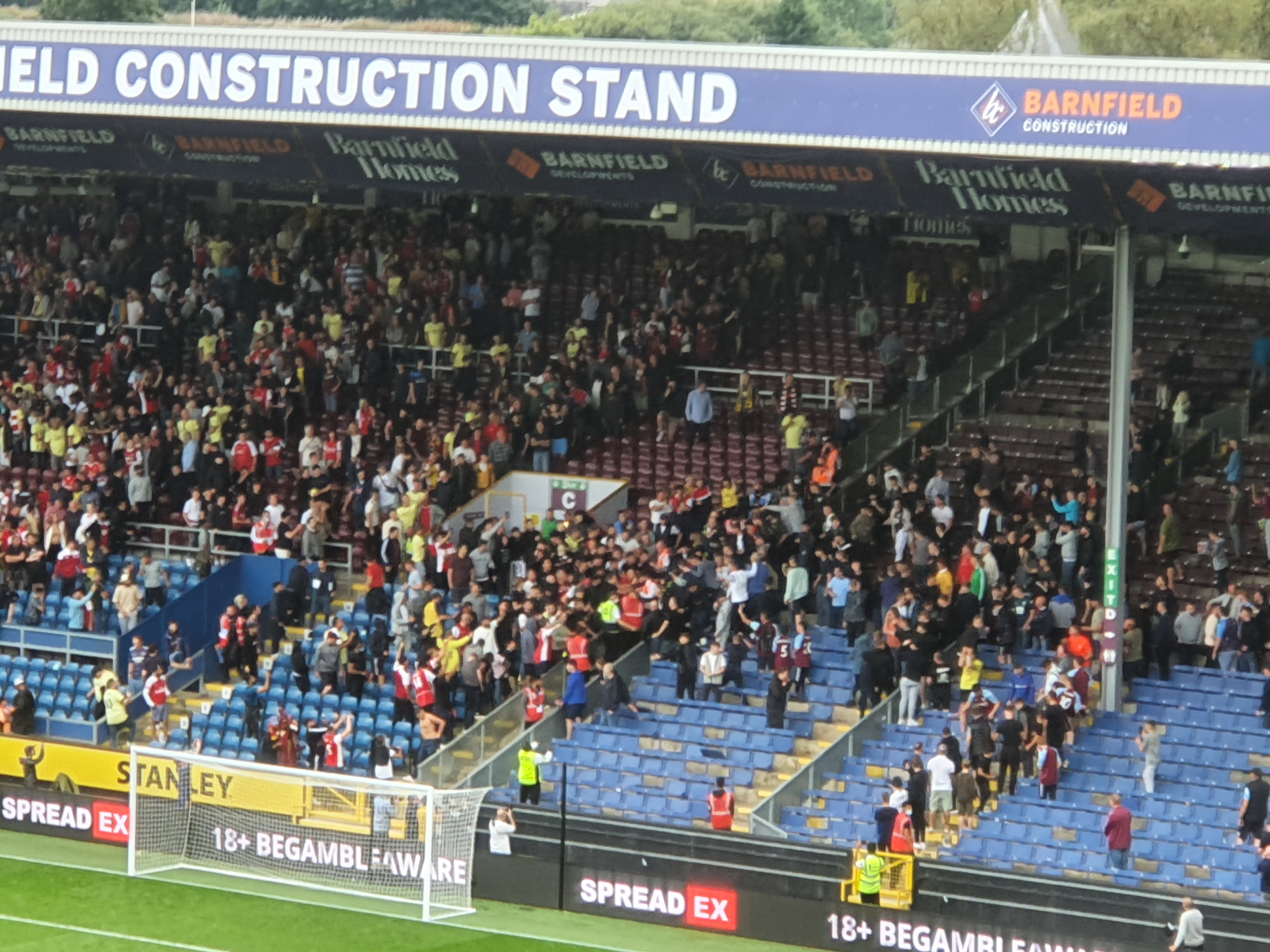 Martin Odegaard's sublime free-kick on the half hour handed Arsenal their first away win of the season at Burnley, after a battling team performance at Turf Moor on Saturday.

The  talented 22-year-old Norwegian curled home after Ashley Westwood had cyncially halted a driving Bukayo Saka run on the edge of the area.

It was Odegaard's first goal since joining the Gunners on a permanent £30m deal from Real Madrid before deadline day last month.

Burnley were denied a chance to equalise from the penalty spot when referee Anthony Taylor correctly overturned his initial decision after reviewing Aaron Ramsdale's challenge on substitute Matej Vydra on the pitchside screen.

Fans clashed at the end of the match after a number of Clarets - who had also booed black players taking the knee before the game - threw missiles and objects into the away support. This followed Burnley fans contunally goading Gooners, following the reversal of the spot-kick, culminating in a five minute flare up at the final whistle.

There were also reports of home fans spitting at travelling Arsenal supporters.

Read on for the Gooner Fanzine's PLAYER RATINGS after a well-earned victory full of guts and character.

Ramsdale: 8.5 – An outstanding display full of confidence, safe handling, excellent organisational skills and good distribution. Could be the Gunners keeper for the next decade if he plays as well as this every week

White: 6.5 - Errant backpass to his keeper for the penalty that never was, but is starting to form an understanding with his Brazilian centre-back partner

Gabriel: 8.5 - A commanding display from an increasingly influential player. Brave and committed, powerful in the air and relished combat, winning the majority of his aerial duels.

Tierney: 7.5 - A battling display from a player with heart. Left the field shirtless after celebrating with the loyal traveling fans after the game (Substituted for Varela Tavare: 7)

Partey: 8.5 – Immense. A giant in the heart of battle. Showed physicality and a refused to be intimidated, yet his ability to play the ball out of tight situations is positively Cazorla-esq. Sometimes outnumbered but never outgunned. (Substituted for Maitland-Niles 7.5)

Pépé: 7 - Not as influnetial as he would have liked but it wasn;'t for the want of trying

Ødegaard: 8 – A sublime free-kick that clinched a hard-fought-game. To think he is still only 22, it’s exciting to think there is so much more to come from him

Saka: 7 - Responsible for the driving run that led to the award of Odegaard’s free-kick after he was cynically felled on the edge of the box

Aubameyang: 7 – Not his most influential game but he gave his all in the tough Lancashire citadel to help lead his team to three vital points

Mikel Arteta: 8 - Brave in picking what was ostensibily an attacking 4-3-3 line-up. More of the same passion, fight and committment against Spurs in the north London derby next weekened would go down extremely well