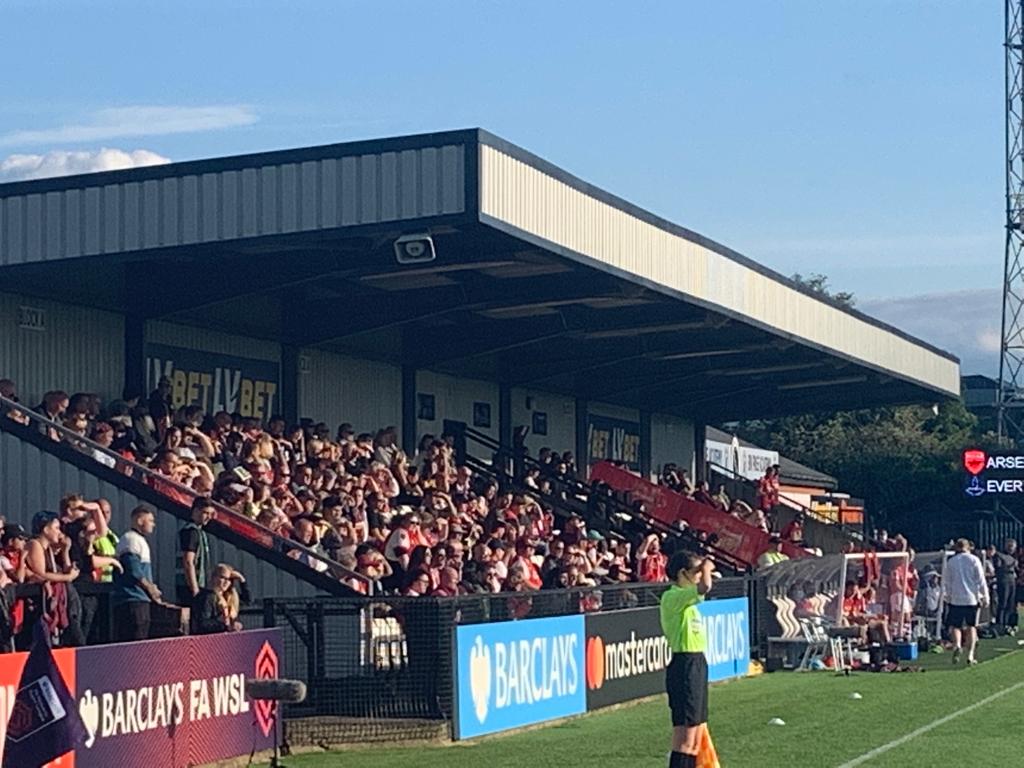 Packed stands at Meadow Park are a sure sign the women's game is growing all the time. CREDIT: @laythy29

It was common knowledge that a trip to Catalonia to play reigning Women’s Champions League champions Barcelona was never going to be easy, but wow, that was tough.

The dominant Barca side mustered 37 shots on goal in a 4-1 thumping, blowing Jonas Eidevall’s Arsenal away with a superb performance.

The Swede took full responsibility for the group stage loss, with positives developed by Frida Maanum’s first goal for the club and yet another Manu Zinsberger penalty save to give Arsenal something to take back to Borehamwood.

Arsenal fans were assured by Eidevall that the Gunners would bounce back from the albeit expected loss, and they did so in style.

With the Sky Sports cameras, Ian Wright and former player Danielle van de Donk watching on, an injury-hit and confidence-low Everton team suffered a 3-0 defeat with Arsenal continuing their perfect start to the WSL.

Just over a week on from scoring an early goal of the season against Aston Villa, Irish international Katie McCabe beat Everton keeper Sandy MacIver with a sumptuous left-footed volley before Lotte Wubben-Moy headed home from a corner.

Incredibly, McCabe’s volley wasn’t even the pick of the goals, as summer signing Frida Maanum followed up her Champions League strike with a stunning rocket-shot from the edge of the box.

The WSL now takes a four week pause, so before the international break gets underway Arsenal continue their Champions League group stage at home to Hoffenheim, who are third in the Frauen Bundesliga (behind the powerhouses of Bayern Munich and Wolfsburg).

After promotion from the second tier in 2013, Hoffenheim managed to maintain a strong position in the division with a number of mid-table finishes before finishing in a club-record third place last campaign.

In their opening UWCL game, a 5-0 thumping of Danish side Koge (who face the daunting prospect of playing Barcelona tonight), Tine Lea De Caigny starred with a brace and an assist that puts Hoffenheim top of Group C on goal difference coming into this round of matches.

Defensive changes were made by Jonas Eidevall in the Everton win but the Arsenal manager can once again choose from a practically full-strength squad.

Keep an eye on Mana Iwabuchi, who is looking to continue a run of scoring against her former clubs- the Japanese scored 10 goals in two seasons for Hoffenheim and could once again be the magician that Arsenal can call upon.

Tobin Heath is still yet to find her first real goal involvement but has displayed all of her class in her opening games for the club, and Hoffenheim will have to make sure that Katie McCabe is not given any space with a sight of goal!

Arsenal will be the favourites coming into this clash at Meadow Park but their German opponents are high on confidence and will be looking to spring a surprise in their quest to progress from the group stages of the newly revamped Women’s Champions League. Once again, the YouTube channel of sports streaming group DAZN is the place to go to watch this one for free, and of course tickets are on sale on Arsenal’s website.