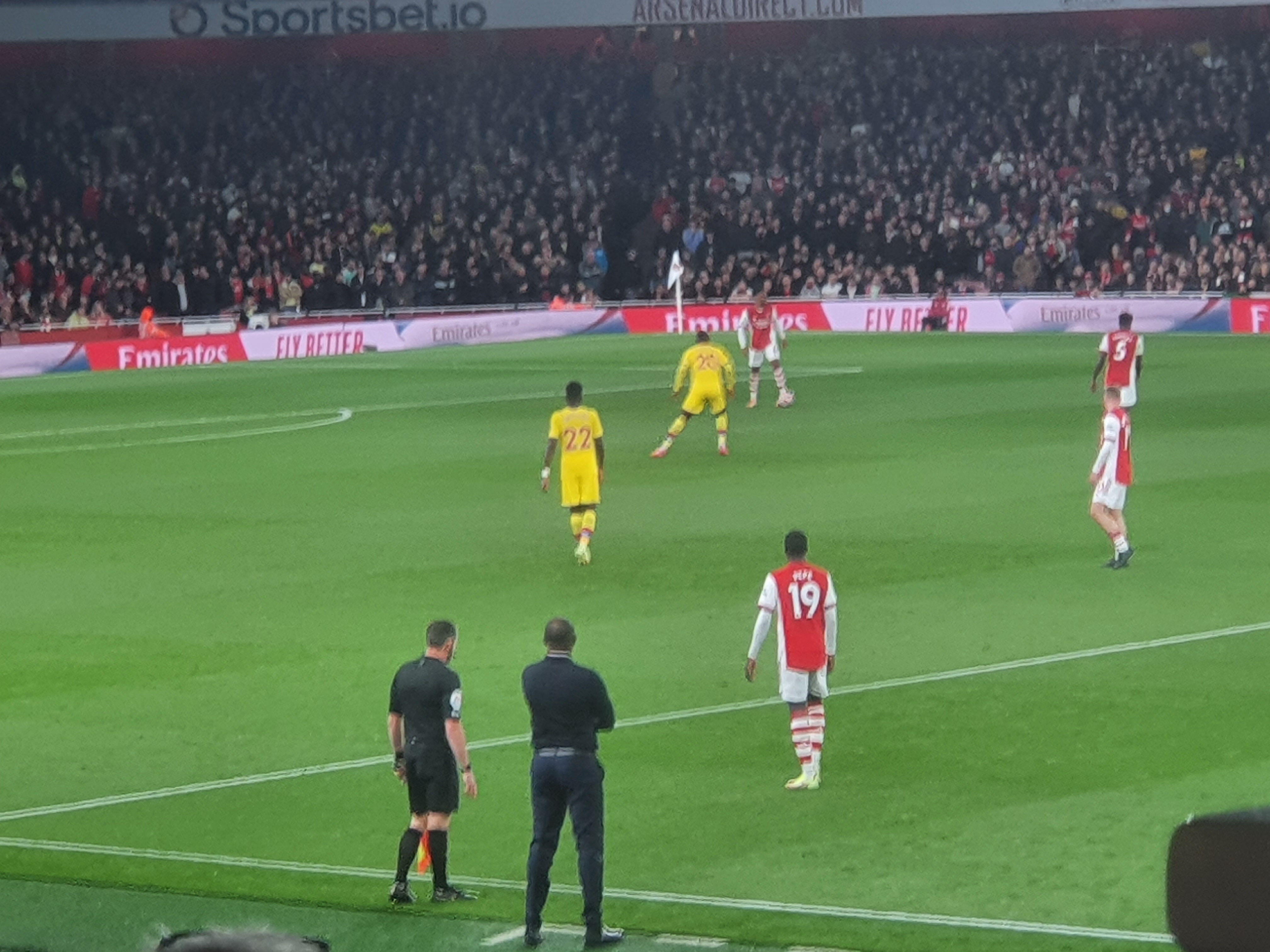 A last-gasp equaliser by Alex Lacazette ensured Arsenal drew 2-2 with Crystal Palace at the Emirates on Monday evening.

The goal floored the Eagles as well as their boss and Gunners legend Patrick Vieira, who dropped to his haunches in disappointment at Lacazette's late leveller.

Earlier Pierre-Emerick Aubameyang put Mikel Arteta's side 1-0 ahead in the eighth minute with his 92nd goal for Arsenal.

Vieira's Eagles went 2-1 ahead with 17 minutes remaining when Odsonne Edouard fired past Ramsdale after Sambi Lokonga was dispossessed by Conor Gallagher.

As the clock ticked down Kieran Tierney thumped the ball against the crossbar, before substitute Lacazette swept the ball home five minutes into added time after Ben White's shot fell to him.

Read on for the Gooner Fanzine's player ratings:

Aaron Ramsdale (GK) - 7/10 - Outstanding save to keep Gallagher out before half time as he showed he will be England's No1 keeper one day. But for now he is still a work in progress.  Should not have let Edouard's goal fly through him.

Ben White (CB) - 5/10 - Raised eyebrows the other day when he said he didn't watch football away from 'work'. Slightly concerning when your centre-back doesn't live and breathe the game. Especially when he was below par against the bustling Palace forward line

Gabriel (CB) - 7/10 - Knew he was in a game against Benteke and Edouard. Didn't always dominate as we know he can

Kieran Tierney (LB) - 6.5/10 - Walloped the woodwork on his 50th Premier League game but was not as influential as he would have liked to have been

Thomas Partey (CM) - 2/10 - Hard to recall the enthusiam that greeted him when he arrived this time last year after such an underwhelming 12 months. Struggled throughout this game. Defensively disappointing, anonymous offensively. Caught in possession for the equaliser

Martin Odegaard (AM) - 2/10 - Missing in action. Didn't do Partey any favours. Nor himself. Gave exactly the performance many feared would be part of his Arsenal career on his return

Bukayo Saka (LM) - 5/10 - Injured after McArthur's cowardly and disgusting kick.The Palace clodhopper should have been sent off. Two words why he wasn't: Mike Dean

Alexandre Lacazette (ST) - 8/10 - The fact the late replacement turned out to be player of the match says it all. Full of energy, full of running and never let the Palace backline settle after he entered the fray.  Deservedly grabbed a 95th minute leveller after his good work

Gabriel Martinelli (LW) - 6/10 - A hugely talented player who hasn't really shone under Arteta since Chelsea away in January 2020. And what can be done to remedy this fact?