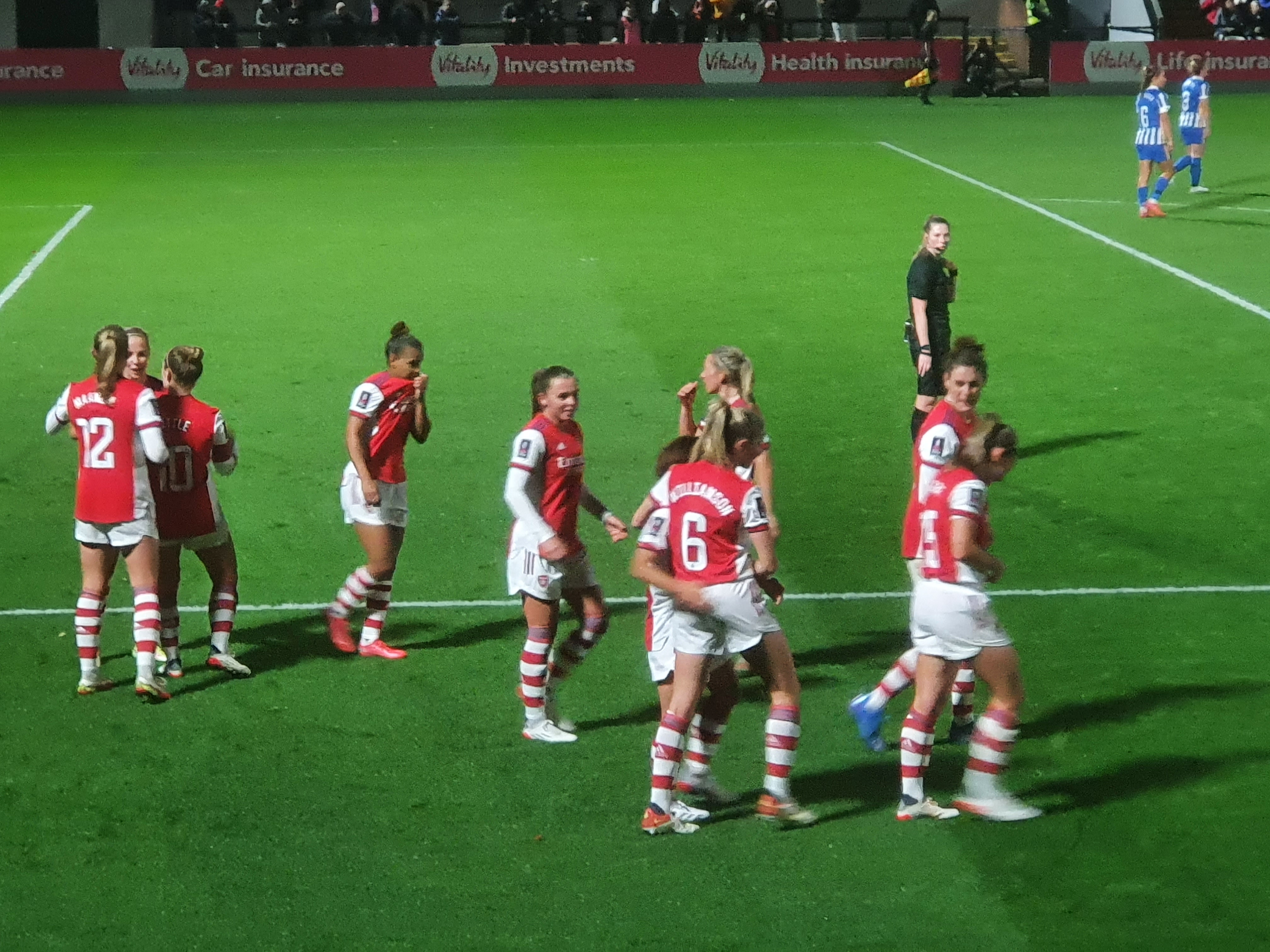 Arsenal celebrations after Leah Williamson's late goal made it 3-0 and sent the Gunners to the FA Cup Final. CREDIT: @laythy29 at Meadow Park

It was fitting there were fireworks let off outside Meadow Park during the match that televised live on the BBC, because the football 14-time cup winners Arsenal team played on Sunday evening deserved to be illuminated.

Everywhere you looked the home side were staffed with top quality to dominate Hope Powell’s side.

Despite the world class Viv Miedema missing after being given extra rest following the latest round of international fixtures – as well as Lotte Wubben-Moy and Tobin Heath - Arsenal could still field Mead, Nikita Parris and Australia’s Caitline Foord as an attacking trident that troubled the Brighton backline all game.

After a shapeless opening, the lively Foord was denied by Brighton keeper Megan Walsh, before then aiming a header narrowly wide from Little’s centre.

Parris nearly opened the scoring when her header beat the busy Walsh, before Victoria Williams showed great anticipation to clear off the line, but despite 64 per cent possession Arsenal failed to break the deadlock by the interval.

However, just like the north London derby in September, when Arsenal trounced Spurs 5-1, you did feel that once the home side scored there would be no way back for their increasingly beleaguered opponents.

Which is what transpired five minutes after the break, when Little slotted home from close range to make it 1-0, following good work by Mead down the flank. Four minutes later Mead doubled the lead after dovetailing well with Jordan Nobbs to make it 2-0.

The in-form Mead has now notched 10 goals and provided 15 assists in only 16 matches for club and country this term, including three strikes in three assists in five league games, not to mention a 14-minute hattrick for England against Northern Ireland at Wembley last week. An achievement she was rightly lauded for prior to kick-off.

There was time for the crowd to be entertained still further when talented livewire Mana Iwabuchi replaced the superb Foord on 65 minutes.

Facing such an array of relentless intensity from Arsenal, there was simply no way back for Brighton, even if it was good to see former Gunner Danielle Carter - who grabbed the winner when the club last lifted the trophy five years ago – look lively throughout the match. It was also good to see the generous home crowd acclaim her return, following desperately bad luck with injures during her time in red and white.

As the clock ticked down and with Wembley beckoning, it was fitting that the outstanding Williamson scored to make it 3-0 on 76 minutes.

It should be noted that Williamson’s calm presence, leadership and technical ability at the heart of the backline was the platform on which this victory was built.

No wonder the Arsenal No6 received the biggest cheer of the night from the crowd amid the joyous celebrations when she was replaced late on by Teyah Goldie, to deservedly earn the acclaim of the crowd.

Not a bad week for the player who captained England last week as she steered her side to a record 17th final.

The celebrations were made even sweeter because Williamson as every Gooner knows, has Arsenal DNA coursing through her from many generations of her family’s loyal support for north London’s finest.

The Gunners will now face London rivals Chelsea for the third time in six years at Wembley on Sunday, December. Arsenal last won the Women's FA Cup in 2016 when they beat Chelsea 1-0 – even if they lost their most recent final against Emma Hayes’ Blues team in 2018.

The showpiece date will mark exactly 100 years since the FA shamefully banned women’s football from the nation’s consciousness, after Dick Kerr’s Ladies regularly attracted crowds of more than 50,000 at grounds such as Goodison Park.

Hopefully there will be more than that number cheering on the red and blue of London’s two best teams at the national stadium on the first Sunday in December when the delayed 2021 FA Cup final is eventually played.