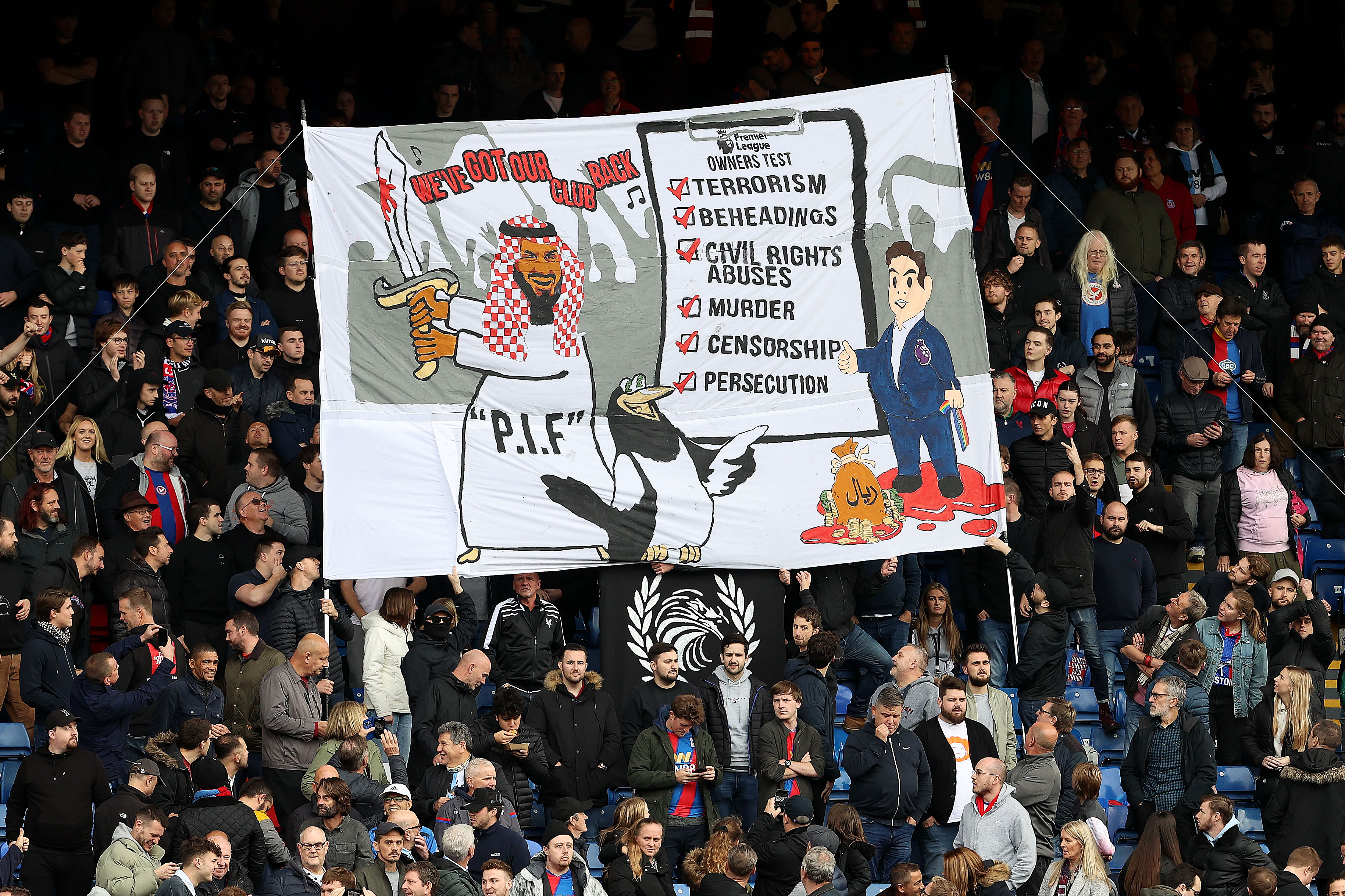 Human rights campaigners are calling on Arsenal fans to demonstrate against the Saudi Arabian takeover of Newcastle United when The Magpies visit the Emirates on Saturday.

Protests have already been mounted at the Toon Army’s last two away games – against Brighton and Crystal Palace.

Two weeks ago at Brighton’s Amex Stadium, LGBT fans demonstrated in support of a gay man jailed in Saudi Arabia for posting a picture on social media of himself  shirtless and wearing leopard-print shorts.

Homosexuality is illegal in the desert kingdom, punishable by severe penalties.

Despite this, Newcastle players – like those of Arsenal and other Premier League teams – will be wearing multi-coloured shoelaces as part of the Rainbow Laces campaign in the coming weeks.

Last month Crystal Palace supporters held up a banner inside the Selhurst Park stadium which took aim at the Premier League’s Owners and Director’s test that allowed the £305m Saudi takeover of Newcastle to go through.

It included a checklist of alleged offences by the Saudi regime including ‘terrorism, beheading, civil right abuses, murder, censorship and persecution’.

Felix Jakens, Amnesty International UK’s Head of Campaigns, said: “Football has its own issues with racism and other hate speech, but fans have a perfect right to voice concerns about serious human rights abuses in Saudi Arabia.

“The greater the spotlight on Saudi human rights violations, the better.

“If fans around the country are speaking about Saudi beheadings, about alleged Saudi war crimes in Yemen or the murder of Jamal Khashoggi, then that’s a useful way of getting basic facts about Saudi Arabia’s appalling human rights record out into the wider world.”

But officers quickly dropped the probe saying no offences had been committed.

Mr Jakens added: “One irony, of course, is that no-one in Saudi Arabia could possibly hope to hold up a banner denouncing human rights abuses in the Kingdom without risking a long jail sentence.”

He highlighted the case of an aid worker jailed in Saudi Arabia for using his Twitter account to poke fun at the country’s economy.

“Supporters of teams playing Newcastle United should bear in mind that human rights abuses in Saudi Arabia are extremely grave - people have been jailed, tortured and even killed - so any protests ought to be serious ones.

“One case we’d urge fans to take up is that of the Saudi aid worker Abdulrahman al-Sadhan, who was recently given a 20-year jail sentence for sending satirical tweets.

“Though the Newcastle buyout is clearly part of the Saudi authorities’ long-term attempt to sportswash the country’s image, it’s fairly predictable that the effect in the short term has been to trigger greater discussion of human rights abuses in the country.

“Greater awareness of Saudi human rights issues is extremely welcome, and we hope it can lead to sustained pressure for much-needed reforms.”