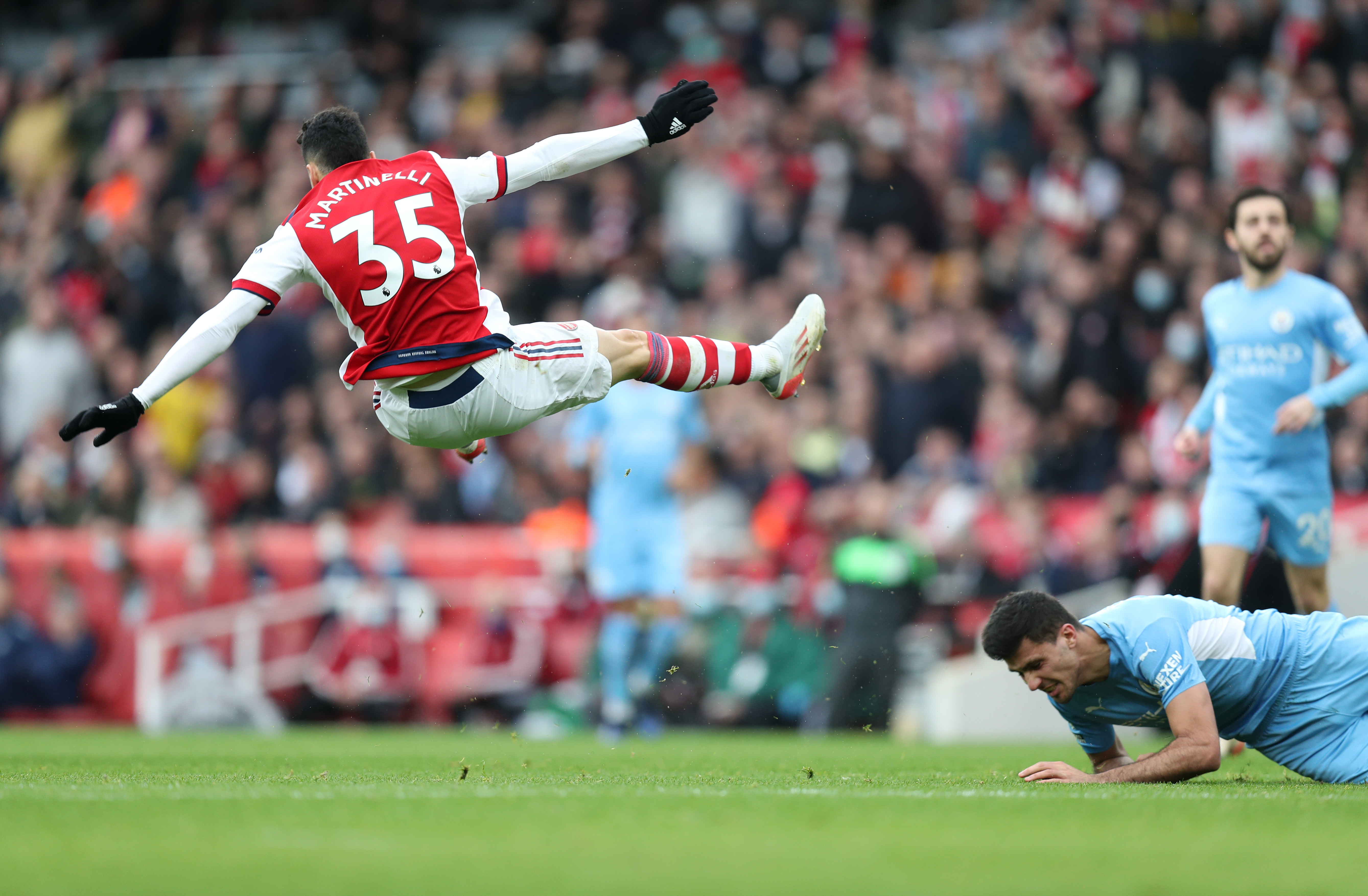 Ten-man Arsenal lost 2-1 to Manchester City in controversial circumstances on New Years Day at the Emirates.

Bukayo Saka put the home side ahead after the opening half hour mark, in a lead that was fully deserved given the Gunners excellent movement on and off the ball, during an outstanding opening 45 minutes.

In the absence of boss Mikel Arteta who was laid low by Covid, the team led by his assistant Albert Stuivenberg, were full of intensity allied with verve to continually force City on the back foot.

However, the pivotal moment came in the 57th minute, when Bernado Silva went down inside the area under the challenge of Granit Xhaka, who had pulled the City attacker's shirt.

Referee Stuart Attwell was well placed and waved away the initial appeals, but after consulting VAR, the spot kick was given.

Riyad Mahrez stepped up to slot home to pull City level and make it 1-1. Moments later Nathan Ake cleared off his own line from an overhit backpass, but the lively Gabriel Martinelli missed the follow up with the goal at his mercy, when his shot clipped the post.

Worse was to come for Arsenal when Gabriel - who was booked for protesting the penalty award - was then sent off for a foul on the halfway line.

Arsenal fans - who backed their team with unstinting support throughout the match - were incensed, feeling that the fates were against them.

Certainly in light of their own side's shouts for a penalty in the first half that was denied, following a long VAR check for Ederson's tackle on Martin Odegaard.

Speaking afterwards Gunners keeper Aaron Ramsdale said: "I felt [City's penalty] was soft. The linesman said he didn’t think it was a penalty, but then they get told to go and check it by VAR.

"I’m more annoyed about the fact that they didn’t tell them to check ours in the first half on VAR. The referee might have said ‘no penalty’ anyway, but in game time, both times it was ‘no penalty’ for them and us, but he gets to go and check there’s and not ours.

"That’s where my frustration is, the inconsistency between one decision and the other."

As the clock ticked down Arsenal appeared to have held out for a draw, but that was before Rodri poked home a loose ball in the 93rd minute to help City claim an 11th successive league win to extend their lead at the top of the table.

The Gunners must regroup for their crucial League Cup semi-final first leg clash against a Liverpool side missing Mo Salah and Sadio Mane - who are off to AFCON - at the Emirates on Thursday, buoyed by the knowledge they matched City blow for blow on the first day of 2022.

Read on for the Gooner Fanzine's PLAYER RATINGS

Ramsdale: 7/10 - A dominant character whose handling and distribution were effective once again

Tomiyasu: 7.5/10 - The cult Arsenal artist Northbanksy honoured the Japanese defender with North London street art in the form of a New Years Eve mural. On this performance you can see why

White: 7/10 - Cool, calm and collected against the league champions, such a shame his centre-back partner was expelled

Gabriel: 5/10 - Blotted his copybook by being booked twice in a few moments. A real shame as he had looked impressive against City's all stqars untiul then

Tierney: 7/10: Full of running as ever to provide an assist for Saka's goal. Surely the favourite to be Arsenal's long-term captain

Partey: 7/10: Dominant in spells which included a driving run through the City team. If he can add consistency to his performances he could be the player many hoped he would be

Xhaka: 5/10 - You can argue about the penalty all day long but you also have to question a player who pulls the shirt of an opponent in the box. A lack of discipline from Xhaka cost Arsenal dearly again. Booked

Saka: 7.5/10 - Never let the City backline settle. A real threat throughout and thoroughly deserved his well-taken goal. No wonder he received thunderous acclaim when he was replaced by Elneny

Ødegaard: 7/10 - Ederson's tackle on the Norway international could have resulted in a penalty award on anothger day (Holding 7/10)

Martinelli: 7.5/10 - Another lively performance from the young Brazilian who nearly scored when his shot clipped the post after Ake cleared off the line