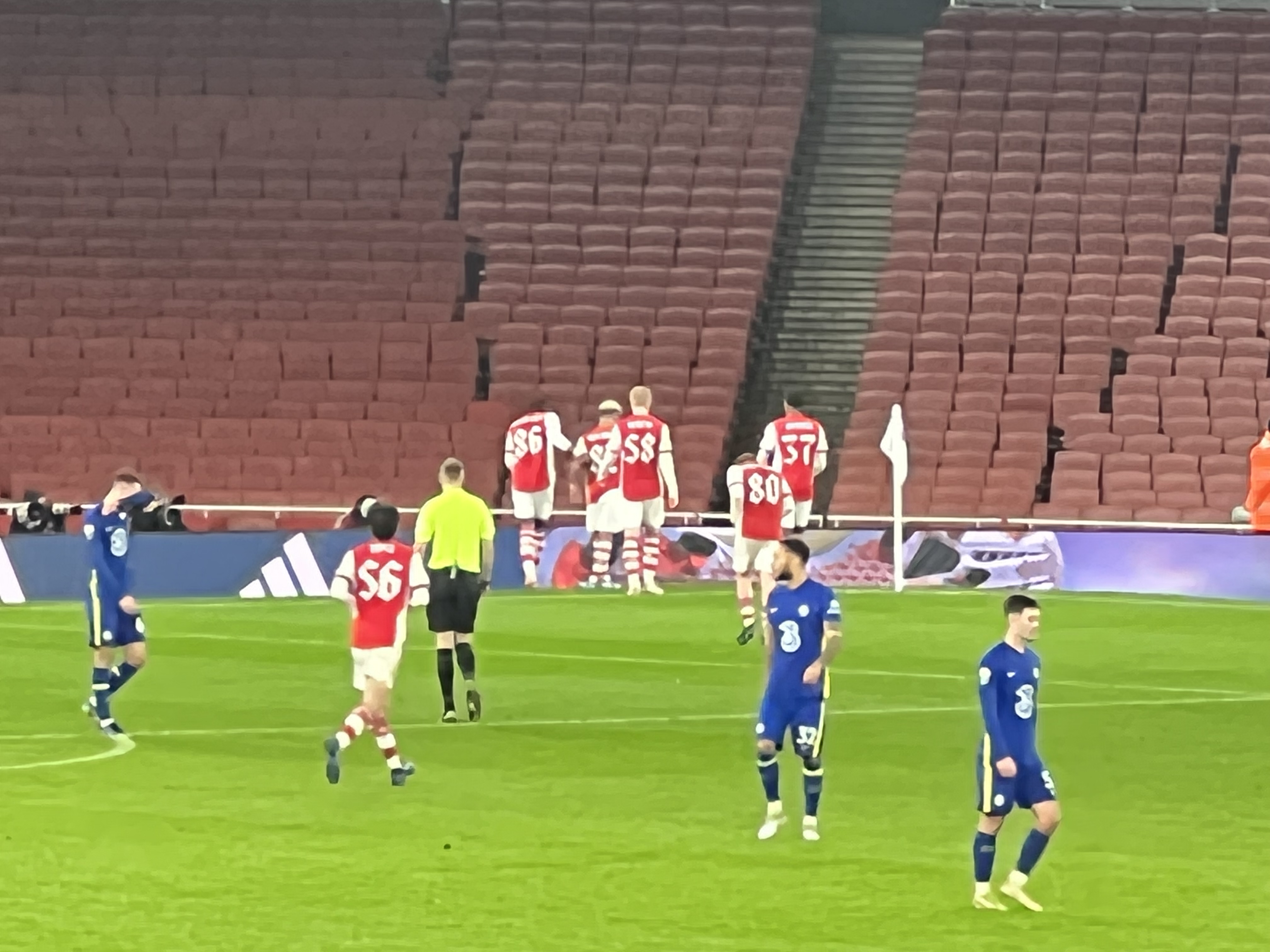 Arsenal U21s beat Chelsea U21 4-1 at the Emirates on Tuesday evening. PICTURE: The Young Guns celebrate the outstanding Omari Hutchinson's wonder goal that put the home side 3-1 ahead. CREDIT: @laythy29

James Olayinka put the Young Guns into an early lead before being stretchered off on only 22 minutes. The Blues No43 Xavier Mbuyamba was handed a straight red card by referee James Bell for hauling down Mika Biereth before half time.

The ten men of Chelsea unexpectedly equalised moments later through Jayden Wareham, when Arsenal switched off momentarily. However. Biereth, the bustling former Fulham academy attacker put the home side ahead just before the break to make it 2-1.

The lead was extended through an excellent long-range strike bt player of the match Omari Hutchinson before pony-tailed substitute Marcello Flores made it 4-1.

Arsenal U21s move one step closer to a Wembley final but now face a stiff test when they travel to Wigan in the next round.

Read the Gooner Fanzine’s Player Ratings from the Emirates

Zach Awe: 7/10 - A solid presence but comfortable playing the ball out from the back as you would expect from an Arsenal defender

Mazeed Ogungbo: 7/10 - Physicality when required but a thoughtful presence in building attacks when time allowed

Ryan Alebiosu: 7/10 - Put in a shift along the right flank and never let anyone down

Jack Henry Francis: 7/10 - Diminutive in stature but a big heart. Relished the battle in midfield while always trying to keep the ball moving. A useful outlet for the Gunners backline

Salah Oulad M’Hand: 7.5/10 Blessed with vision and creativity. A genuine prospect to follow Charlie Patino form the Papa John's to the first team

James Olayinka: 7/10 - Showed a calm head with his early finish to put the Gunners ahead but had his night curtailed when he was carried off

Mika Biereth:  7.5/10 - Bustling and full of energy. Showed his predatory side when slotting home from close range to put the Gunners ahead again before half time.

Omari Hutchinson: 8/10 Lively and full of running, never let the Chelsea backline settle. An outstanding goal to warm the crowd and make it 3-1 on a cold North London evening capped an assured display from the player of the match

Tim Akinola: 7/10 - Replaced goalscorer Olayinka who was stretchered off on 22 minutes

Marcelo Flores: 7.5/10 – Arsenal’s ponytailed No78 grabbed a fourth moments after replacing the outstanding Hutchinson. Also had a fierce shot cleared off the line

Reuell Walters: 7/10 - Came on for Hand with the Young Guns dominant

Khayon Edwards on for Lopez late on: 7/10