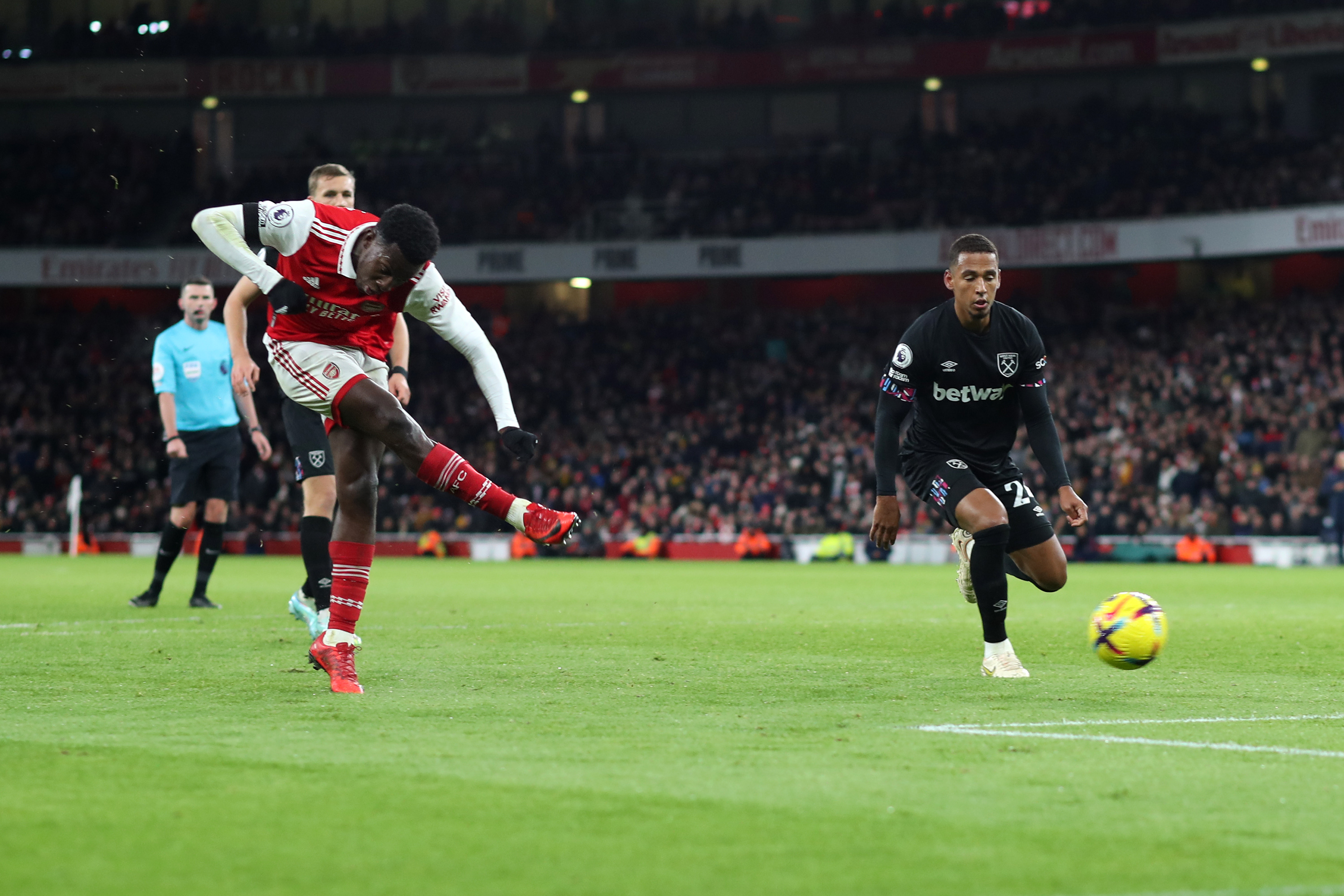 Jubilant Arsenal supporters hailed past and present as their side emphatically overturned a half time deficit to beat West Ham 3-1 on Boxing Day evening.

Second half goals from Bukayo Saka, Gabi Martinelli and Eddie Nketiah sealed a welcome victory for Mikel Arteta's table toppers, after Said Benrahma’s first half penalty put David Moyes Irons ahead – as the Gunners continue to confound at the rarefied heights of the world's richest league.

On a cold evening to warm the heart, fans also chorused the name of a lost but never-to-be-forgotten legendary name in the long and illustrious history of this grand old club. One Arsene Wenger to be precise.

Premier League football finally returned to the red and white half of North London after an interminable break of more than six weeks on Boxing Day evening. Also returning was the ghost of Christmas past - a certain monsieur Wenger, who was making his first visit since he departed in the tumultuous month of May, 2018.

Similar to the majority of the first decade of his reign, Wenger showed impeccable timing on his return as his club turned around a frustrating half time deficit to emerge victorious.

Of course, a lot has changed, changed utterly since the momentous day Wenger departed, not least the fact that this mighty club have had to rebuild from the bottom upwards, after a number of false dawns - and false prophets.

Thankfully, the club is in much better shape than when the benign dictator ultimately departed after achieving so much in his first decade.

It is indisputable that Wenger always had the best interests of this great institution at heart, even if some of the people that he put his true faith in - on and off the pitch - failed to repay the compliment, as the Gunners stuttered, spluttered, misfired, and misled during those, sadly toxic, last few years of his reign.

However, after the purging of plenty of sporting pain, disappointment and frustration, the upshot as we approach 2023 - after four and a half long years since Wenger's departure - is that Arsenal are now once again in fine shape under a young progressive coach, with intelligence and principles to match.

It was thoughtful of Wenger to wait until arguably Arsenal's strongest position in the intervening years since his exit before returning - with Arteta's effective mix of hungry young guns and efficient experience ensuring the Gunners started the match five points clear of the chasing pack.

A quick scan of the league table for Wenger surely meant it was a case of plus ca change, plus ca meme chose. Because, while it might have been a surprise to see Newcastle sit in second spot at kick-off, to anyone who knows football, the names might change but the petrodollars and sportswashing stay the same.

For Eddie Howe's Saudi-state backed Magpies, read Roman Abramovich's arriviste Chelsea back in 2003, who in the memorable words of Wenger's trusted right-hand man David Dein all those years ago, changed the dynamics of the top level of English football utterly, firing as they did, £50 notes onto the pitch, in a bid to attract the top talent, blowing away Arsenal's model of carefully balancing the books.

In the process rendering such a quaint notion as only spending what you earn as something one might read in a dusty and long-forgotten economics text book, and certainly not witnessed in the white heat of the cut-throat Premier League.

Yet, what persists through top flight football in the 21st century is a purity - relative of course - from Arsenal, which continues to this day.

The club mostly spends what it earns in a laudable enterprise that had seen them left far behind at the end of Wenger's 22 years. Certainly compared to many of the other big guns fired and fuelled by petrol state-backed sponsorship.

For there is no billionaire sugar-daddy, nor the compromised cash of state-backed sports-washing at Arsenal. Yes, the Kroenke's are worth many zeroes, but there the fun ends and the frugality takes over.

Not least when surveying the fallout from the global tournament that nobody who truly cares about the game wanted. With the Gunners Gabriel Jesus - and early season livewire - predictably suffering a long-term injury on duty for the Selecao, the question should have been when, not if, Arteta and technical director Edu, identify a top-level replacement for the stricken former Manchester City attacker.

Rather than rely too heavily on the yeoman Nketiah to continue to steer Arteta's side to further overachievement. Yet just like his team, young Eddie continues to surprise.

However, the opening goal had nothing to do with any failing from the Gunners frontline, more a harsh decision from referee Michael Oliver that deemed Qatar-returnee William Saliba had made contact with the onrushing Jarrod Bowen, promptly pointing to the spot.

It wasn't too difficult to guess what the invariably sage, yet occasionally apoplectic Wenger would have made of the decision, given his track record over the years. As it was, it wasn't hard to second guess what Arteta made of the moment.

Benrahma made no mistake from the spot, firing straight down the middle past Aaron Ramsdale, who wrongly guessed the former Brentford man would aim for his right-hand corner, to make the score 1-0 to West Ham on 27 minutes.

The home side came out of the blocks the fastest after the interval, which saw Saka equalise to make it 1-1 on 53 minutes, firing past Irons keeper and former Arsenal netminder Lukasz Fabianski after showing persistence in the box following Odegaard's set up.

Five minutes later Arsenal went ahead through Martinelli's low strike which beat Fabianski at his near post to make the score 2-1.

No wonder the majority of the home crowd assembled started signing: 'There's only one Arsene Wenger,' before launching into 'Super Mik' as a paean to the current boss.

To cap a memorable evening, Nketiah sealed a stirring triumph with a clinical finish to make the scoreline 3-1.

And at the final whistle, high up in the stands, a certain Frenchman applauded.

The whole crowd here at The Arsenal just started singing: ‘There’s only one Arsene Wenger.’ Before launching into ‘Super Mik Arteta.’I’m not crying, you are pic.twitter.com/fCMHJ91gU3