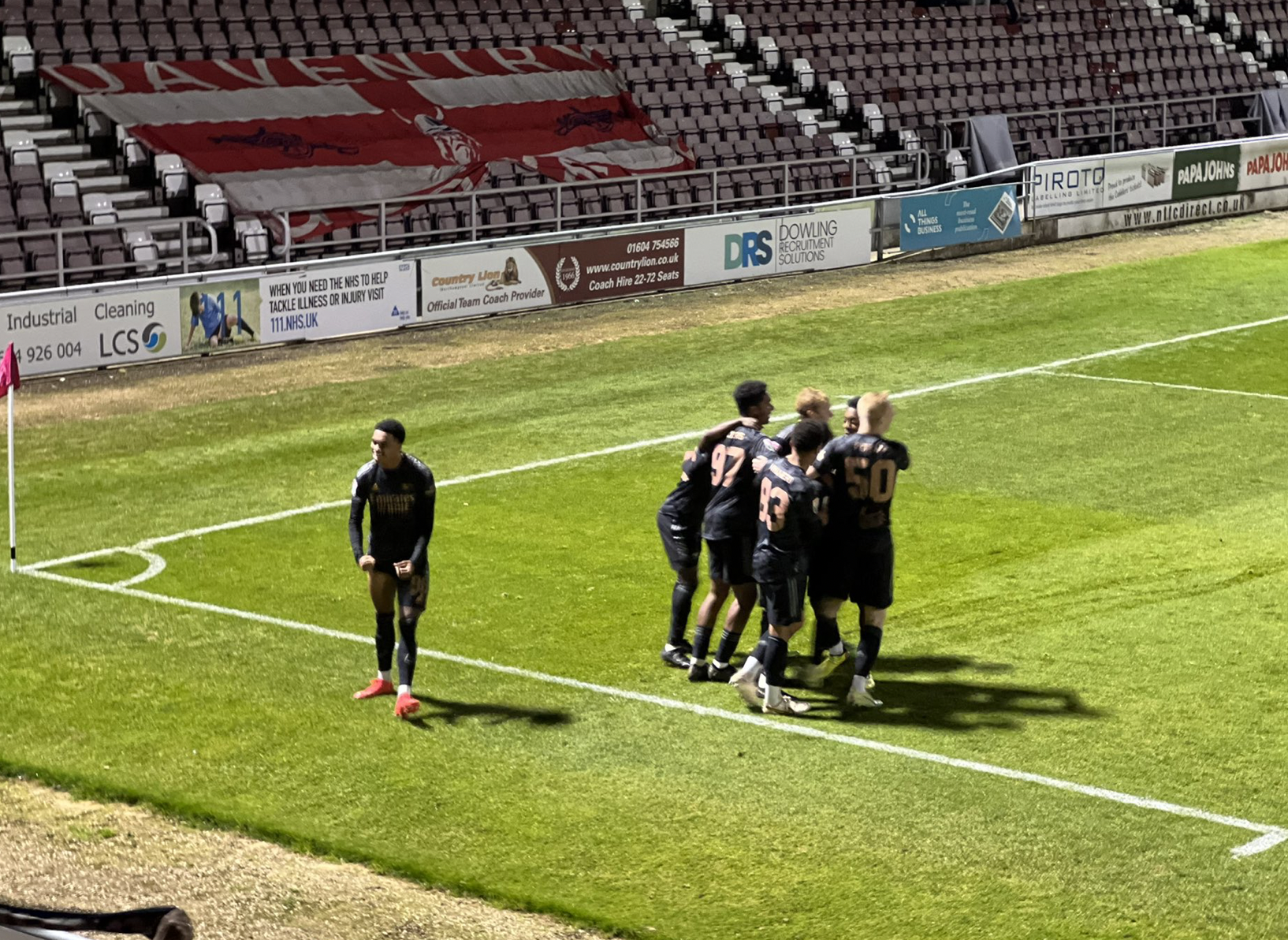 The precocious young gun who made his Gunners first team debut for Mikel Arteta’s side aged just 15 years and 181 days during a 3-0 victory over Brentford last month, came on as a substitute to help the North Londoners to a 3-1 victory at Northampton Town.

Prior to that, the Cobblers Josh Tomlinson made history of his own, when netting in the tenth minute to put the home side 1-0 ahead, becoming the youngest scorer in the club’s history at 16 years and 321 days.

However, the Arsenal youngsters rallied to qualify from the group, with second half goals from highly-rated centre back Zach Awe, Amario Cozier-Duberry and a late third from Nathan Butler-Oyedejji – to send the 308 travelling fans in front of a crowd of 3,037 at Sixfields into raptures.

Ipswich topped the group despite losing 1-0 at the Abbey Stadium to Cambridge United, with the U’s finishing in third place and Northampton rock-bottom.

In Southern Group B, former Arsenal U21 boss Kevin Betsy led Crawley to a 5-2 win over Aston Villa U21s

In Southern Group C Will Greenidge and Freddie Potts ensured West Ham U21s won 2-1 at Cheltenham, but the young Irons were knocked out as the home side and Milton Keynes made it out of the group after MK won 2-0 at Walsall.

Steve Evans Stevenage continued their excellent run of form as the League Two table toppers beat Spurs U21s 1-0 through a Jordan Roberts goal at Broadhall Way to lead Southern Group D, while Peterborough joined them despite losing to Wycombe 4-3 on penalties, following a 1-1 draw at Adams Park.

Bristol Rovers beat Swindon 3-0 in Southern Group E, while Plymouth edged past Crystal Palace 1-0 as the Gas and Argyle both qualified.

Southern Group F saw Forest Green ease past Exeter 4-1 and Newport beat Southampton U21s 2-1 as Rovers and County made it into the knock-out stages.

Southern Group G saw Chelsea U21s beat Orient 3-2, while Sutton triumphed over Oxford United 2-0 as The Blues and the Gander Green Lane outfit made it through.

Everton U21s routed Hartlepool 6-0 at the Victoria Ground to top Northern Group A, through Tom Cannon’s hattrick and a brace from Stan Mills, while Harrogate beat Morecambe 2-1.

Bolton beat Leeds U21 3-0 in Northern Group B, while Tranmere won 1-0 at Crewe to finish second.

Port Vale beat Wolves U21 2-0 and Stockport emerged 1-0 victors over Shrewsbury in Northern Group C - which was won by the Valiants with Wolves ending in second spot.

Accrington Stanley beat Liverpool U21s 3-2 to finish runners up in Northern Group D with the Anfield youngsters finishing in last place with zero points following three defeats. Salford won the section by beating Rochdale 4-2 on penalties after a 2-2 draw at Spotland.

In Northern Group F, Manchester City U21s won 3-1 at Derby with a brace from Carlos Borges. The Rams remained in second place despite a first defeat. City trail leaders Mansfield Town by two points ahead of the final game. The winner of the last game between City and Grimsby will advance to the knock-out stages.

In Northern Group G Fleetwood drew 2-2 with Manchester United U21s, with the home side earning a second point after winning 5-4 on penalties. They still exited the competition after the Old Trafford youngsters earned a point which saw them lead the table.

Goals from Callum Paterson and Will Trueman sealed Sheffield Wednesday’s first win, but the Owl failed to progress despite beating Leicester City U21s 2-0, who also did not quality.

The first knock-out round is on Wednesday, November 30.