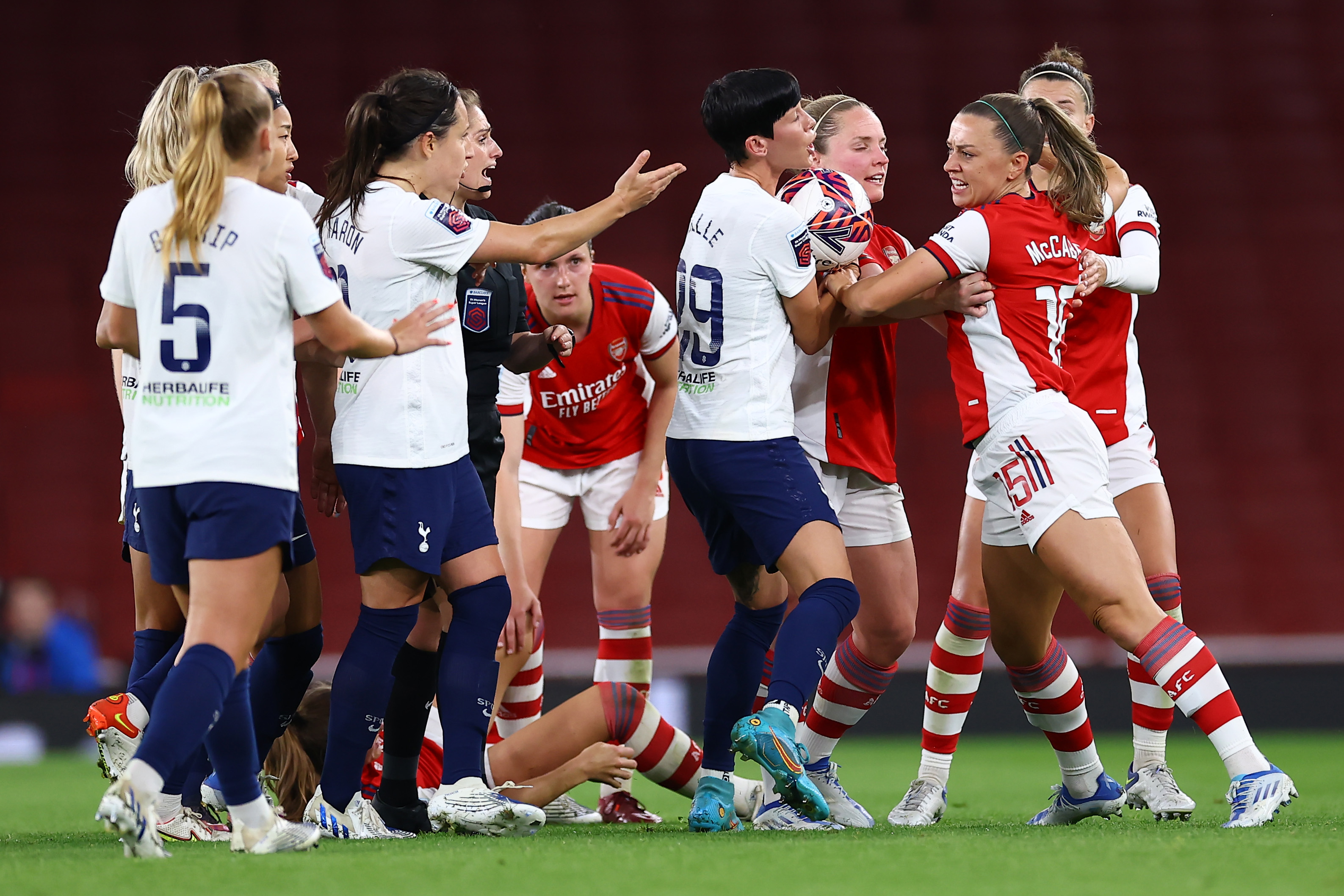 Katie McCabe of Arsenal squares up to a group of Tottenham players on May 4, 2022 during the Women’s Super League clash. Photo: Jacques Feeney / Offside

It may only be Arsenal’s second game of the new Women’s Super League season, but the Gunners are already set to make history.

More than 51,000 tickets have now been sold for tomorrow’s North London Derby at the Emirates, with Arsenal breaking the record Women’s Super League crowd that was actually set by Spurs in the same fixture back in 2019. There is even the potential that this crowd could even break the record of 53,000 people at a domestic women’s game all the way back in 1921.

Arsenal last hosted their rivals at the Emirates in May, the penultimate fixture of last season, which was watched by just over 12,000 fans on a Wednesday night. How times, in less than four months, have changed. The impact of Euro 2022, plus much improved coverage and publicity (of which Arsenal FC should take so much credit for), has meant that Arsenal fans will flock to the Emirates in their thousands tomorrow afternoon. It is of course an international break in the men’s game, so the derby fixture could not have come at a better time.

Spurs were rolled over 3-0 at the Emirates in the last fixture, with Angela Addison’s missed penalty in the closing stages completing an ideal night for Arsenal, who then missed out on the WSL title by just one point on the final day. However, the North London Derby at the Hive earlier on that season was a far closer game, with Arsenal struggling to break down a well-organised and resolute Tottenham defence. Vivienne Miedema’s equaliser in added time spared the Gunners’ blushes, but Tottenham are still waiting for their first ever win against their rivals.

Rehanne Skinner took Spurs to a very impressive 5th place finish last season, and the summer signing of Drew Spence from Chelsea could be an important factor in trying to replicate these exploits. Spence actually started her youth career in the Arsenal Centre of Excellence, but has already made her mark for Spurs, scoring at both ends in last weekend’s win over Leicester after Ashleigh Neville’s long range strike.

Arsenal will have to get their tactics spot on to avoid a repeat of Wednesday night’s frustrating draw against Ajax in their Champions League qualifier first leg. The Dutch side snatched a late equaliser after some poor defending before Katie McCabe had a winning goal controversially ruled out for offside. After their emphatic 4-0 win over Brighton on the opening day, Wednesday’s game seemed to remind fans that Arsenal still have plenty of work to do not just at Champions League level, but against sides that will look to give the Gunners plenty of the ball and force them to break down their defence, something that Spurs will likely set out to do.

The physicality and everything else that comes with a North London Derby will also be something that Spurs look to harness as they try to spoil Arsenal’s big day at the Emirates. Tickets are on sale right up until kick-off, with walk-ups available. Come and be a part of history at the Emirates, we’ll see you there.