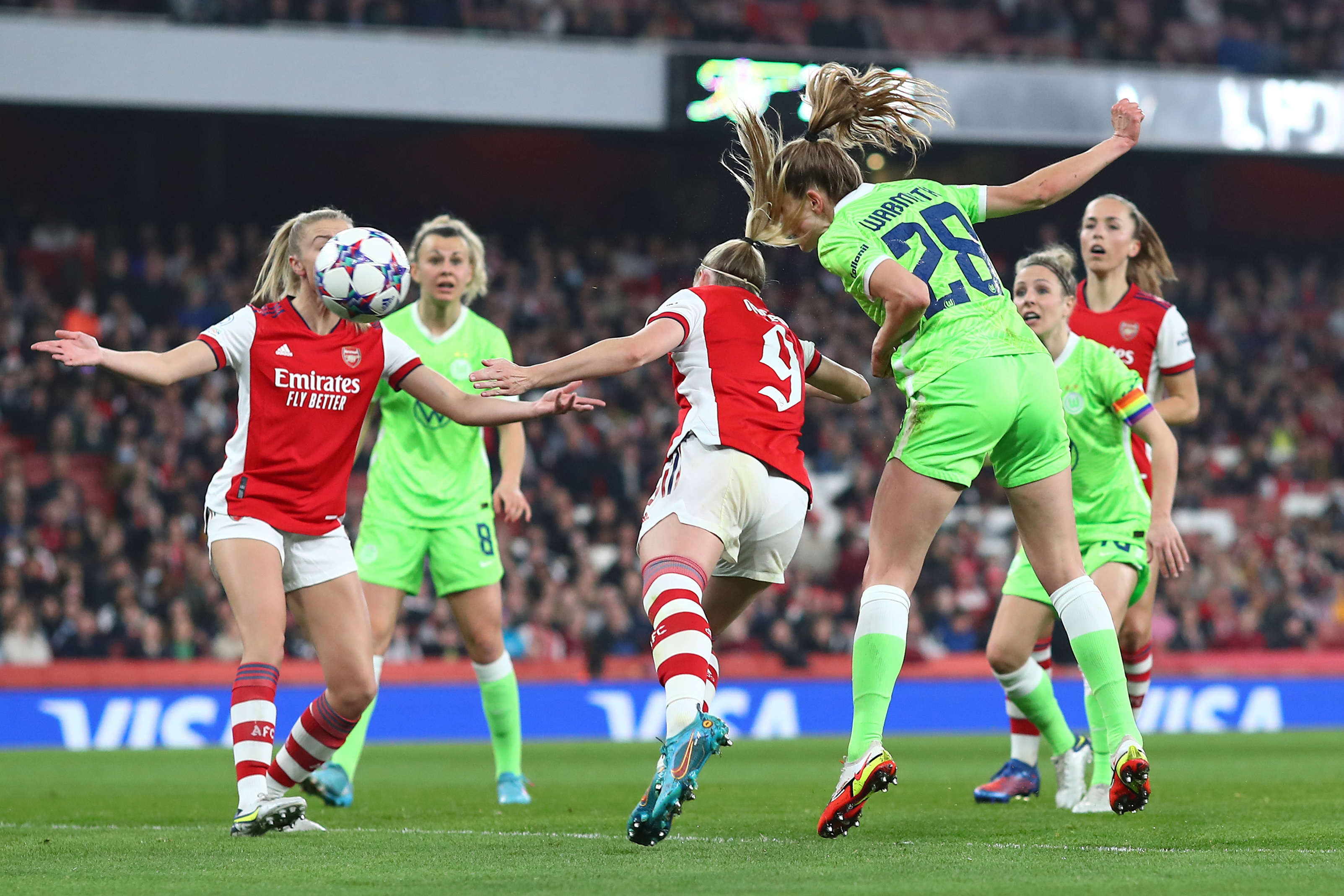 A late Lotte Wubben-Moy equaliser helped Arsenal Women to draw 1-1 with Wolfsburg in the first leg of their Champions League quarter-final clash.

In front of a crowd of 5,018 at the Emirates on Wednesday evening, Jonas Eidevall's side refused to be beaten, following Tabea Wassmuth's first half opener for the German side.

The late leveller makes it all to play for as the Gunners showed a redoubtable spirit to pull level in the 89th minute.

European football may well be returning to the Emirates next season for Mikel Arteta’s Arsenal side, but it was Arsenal Women who took centre stage on Wednesday night with a Women’s Champions League tie against German league leaders Wolfsburg in front of 5,000 spectators.

Jonas Eidevall fielded an attacking formation and Beth Mead came close in just the first minute after being played through on goal by Stina Blackstenius. Eidevall mentioned the expectation of a high-tempo, end to end affair ahead of the game and he was proven right, with Arsenal starting strongly in front of a vocal crowd.

Tommy Stroot’s Wolfsburg were able to wrestle back control of the game after a frantic start and played their possession football well, and it was the German side who took the lead with a header by Tabea Wassmuth after Arsenal failed to clear their lines. Wolfsburg almost made it two from another header, which in the end didn’t challenge Manu Zinsberger in the Arsenal goal. An enthralling tactical battle between two league leaders made for a very tight first half.

It was the Gunners who resumed after half time with the words of Eidevall still clearly ringing in their ears, with Beth Mead and Stina Blackstenius both wasting excellent chances. Blackstenius then thought she had equalised after taking the ball round Almuth Schult and tapping into an empty net, but the offside flag was raised.

Wolfsburg then struck the woodwork twice in a matter of seconds, somehow not doubling their lead, with Jill Roord denied by the post against her former side. This only galvanised the Emirates crowd even more, and USA star Tobin Heath was introduced along with Nikita Parris and Frida Maanum with fifteen minutes to go to try and give Arsenal something to take into the second leg.

Maanum and Miedema both had tame efforts saved before a brilliant free kick routine by Tobin Heath landed at the feet of Wubben-Moy, who smashed the ball home after a great first touch. Lifelong Gunner Wubben-Moy’s goal gave Arsenal a deserved equaliser at the Emirates, and her side were able to close the game out succesfully to set up a mouthwatering second leg.

Both legs of this tie take place at each club’s ‘main’ stadium, with Wolfsburg’s 30,000 seater Volkswagen Arena hosting the second leg next Thursday.

Couldn’t do much to prevent Wassmuth’s header but made some smart saves in the second half.

A player for the big occasion. Orchestrated Arsenal’s build up play from the back and made some crucial interceptions.

Could have done better to clear the ball in the lead-up to Wolfsburg’s opening goal but she made up for it with a fine finish to equalise for Arsenal!

Had to work hard to thwart Wolfsburg’s excellent wingers. Arsenal couldn’t take advantage of some good set pieces from the Australian.

Didn’t see much of the ball tonight but worked tirelessly.

Good display once again from the Arsenal skipper who secured the midfield well.

Arsenal’s top scorer in this season’s competition occupied all kinds of different positions to try and create something for her side. Always a privilege to watch such a great player

Fired wide in the first minute after being played through on goal by Blackstenius and missed some great chances throughout, especially in the second half, to spoil what was generally a good display.

Made her first Champions League appearance for Arsenal and looked to make runs in behind off the shoulder of the last defender. Missed a great chance at the start of the second half and was eventually substituted.

Wasn’t far away from scoring another long-range wondergoal, the perfect player to galvanise the Gunners after going a goal down. Link up play and close control was superb.

Replaced Katie McCabe, causing one of the loudest cheers of the night by doing so, and rightly so. Her brilliant pass from a free kick on the edge of the box found the feet of Lotte Wubben-Moy, who equalised for the Gunners.