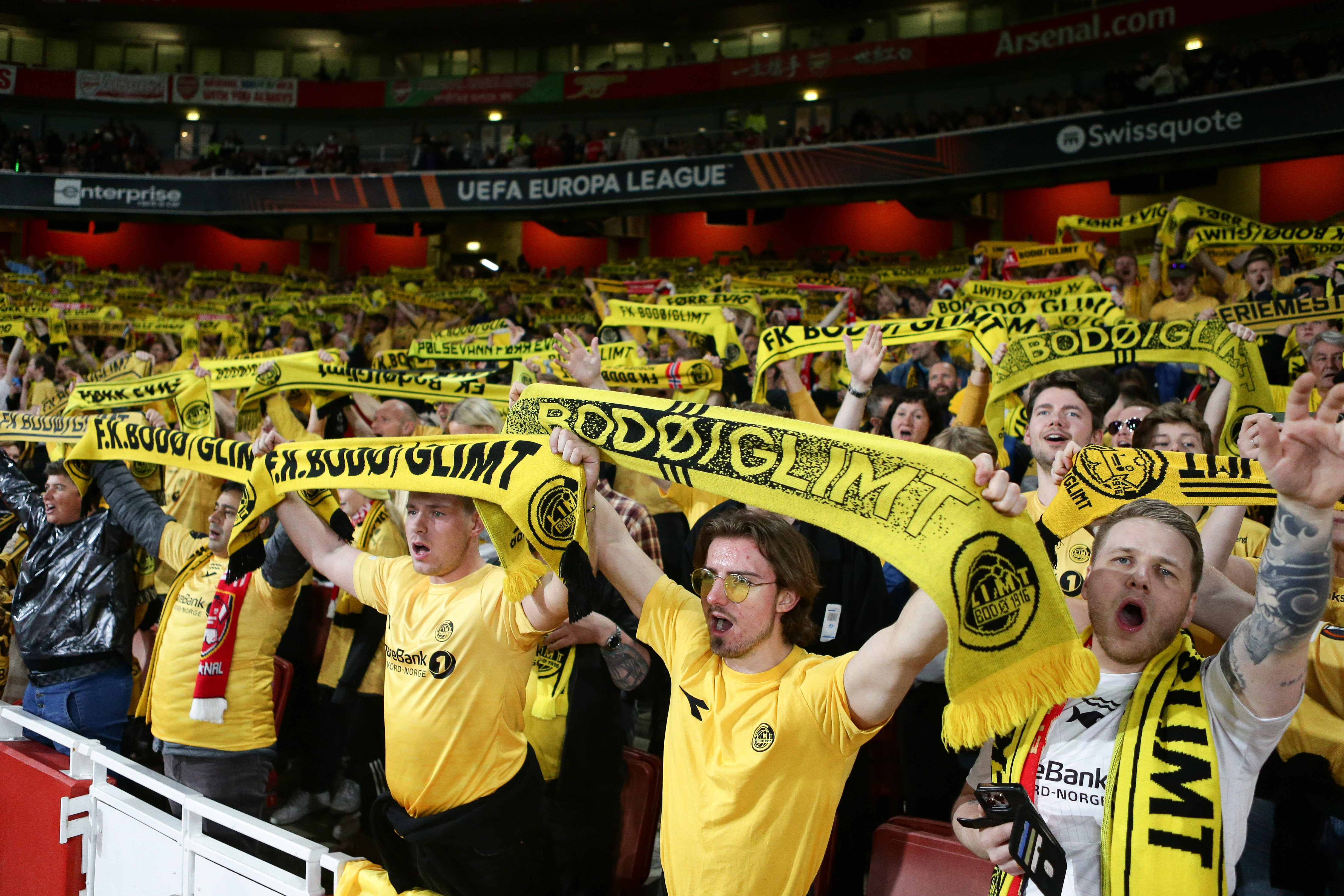 The travelling Glimt fans from Bodo rightly earned praise for their terrific support at Arsenal last week. More of the same is expected at the Aspmyra Stadion on Thursday evening. CREDIT: Offside

What a great week to be an Arsenal fan. Domination in the North London Derby, and a well deserved, dramatic victory against Liverpool with Mikel Arteta’s young superstars shining again. Sandwiched between the two, we also enjoyed three points and a clean sheet in the Europa League, with Norwegian outfit Bodo/Glimt unable to register any kind of upset at the Emirates as Fabio Vieira announced himself to the Arsenal faithful.

Reflections on victory over Liverpool

Before we get onto Arsenal’s European exploits, let’s reflect on all of the drama of Saturday’s 3-2 win over Jurgen Klopp’s side. Arsenal flew out of the blocks in front of an atmosphere that some are labelled as one of the finest that the Emirates Stadium has seen in sixteen years, with Gabriel Martinelli putting the Gunners ahead after 58 seconds after a sweeping move from Saka and then Odegaard.

Liverpool were able to grow into the game and responded through the dangerous Darwin Nunez, but their defence was exposed by another breathtaking counterattack on the stroke of half-time as Bukayo Saka restored Arsenal’s lead.

The game could have been very different if the sides were all square going into the second half, but the way Arsenal managed to win the game after being pegged back twice (Liverpool may be underperforming this season but still possess a frightening attack on paper) made the result even more impressive, with even the ‘celebration police’ unable to make any arrests in the aftermath of the game.

Gabriel Jesus did not train at London Colney on Wednesday morning prior to the team flying to the Arctic Circle.

Arteta named a much-changed starting eleven against Bodo/Glimt in last week’s Europa League clash, and the Arsenal boss will use Thursday night’s game as another opportunity to rest and rotate.

Matt Turner ticked many boxes both on the ball and as a shot-stopper, keeping a clean sheet against the Norwegian side in a competition where he should feature in most games.

The player who really used the opportunity well was Portuguese starlet Fabio Vieira, who’s delightful first touch and cross to set up Rob Holding’s header was a real signal of the talent he possesses. Vieira will certainly be given more Premier League opportunities in the absence of Emile Smith-Rowe, but is taking chances whenever they are handed to him by Arteta.

However, Mikel Arteta’s substitutions last week certainly indicated that Bodo/Glimt caused problems in the second half of Thursday’s tie, with Jesus, Odegaard and Saka all introduced in attack to try and seal the three points. Which they did. And how good was that assist to set up Vieira, weaving his way through the Bodo/Glimt defence.

The Norwegian champions are no strangers to a Europa League upset, and have made their home ground, an artificial pitch in the Arctic Circle, something of a fortress, beating Jose Mourinho’s Roma 6-1 there last season!

Supporters enjoy the quirky 50-year long ritual of bringing giant sized toothbrushes to the 8,300 capacity Aspmyra Stadium, and have enjoyed back to back league titles after being promoted to the top flight only four years ago, as well as a run to the quarter finals of the Europa Conference League last season that included the remarkable win over Roma in the group stage as well as beating Celtic home and away in the playoffs. Roma eventually brought Bodo’s European run to an end in the quarter finals, but still managed to defeat the Italian side in the home leg.

Bodo/Glimt drew plenty of praise from Mikel Arteta for their bravery and sticking to their attacking principles at the Emirates last week, and their supporters were simply magnificent from start to finish in the away end.

All eyes in the Arctic Circle will be on whether Kjetil Knutsen’s side can mount another European upset at home, with Arsenal looking to extend their lead at the top of Group A.

There is a real sense of pride in their team here in Bodo. Glimt’s impressive achievements under their highly-rated boss Kjetil Knutsen means there’s a real bond between the club and the town. No wonder he told me last week at Arsenal that his club’s fans were the best in Norway pic.twitter.com/bMvzrsYhIR