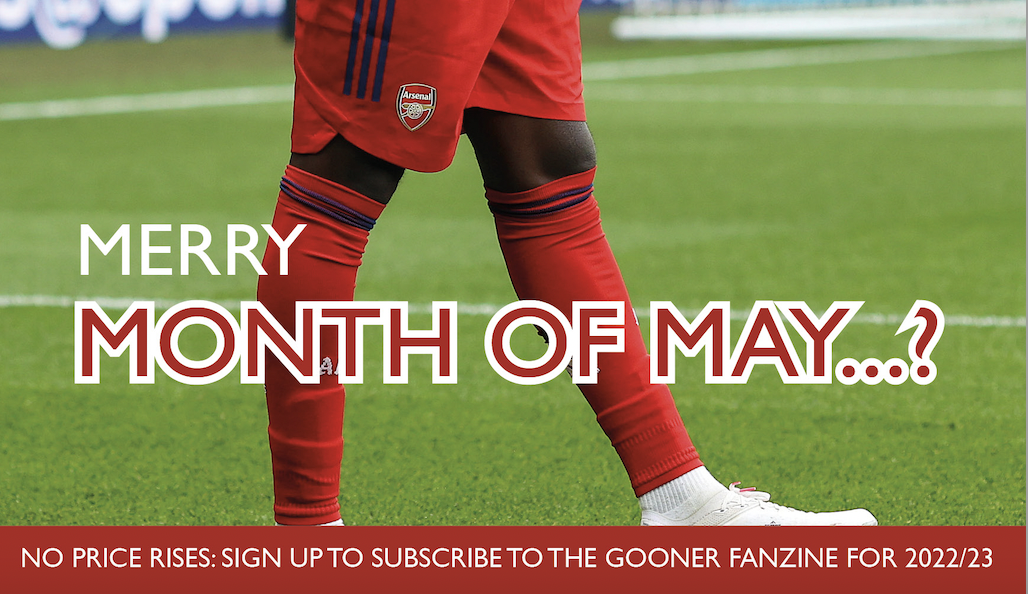 We’re really proud of our current squad and think it’s one of the strongest line-ups the Gooner has ever had.

Why? Well, because we’ve got Gooner regular – and one of the most respected Arsenal journalists around, in Charles Watts, along with the ever-excellent Le Grove.

All fanzines need humour and we’re proud to have the inimitable Alistair Coleman with his Cursed Gooner piece as well as a new favourite, Antonio Conte’s Diary – as well as Murph’s Mirth cartoon strip

Talking about favourites, we’ve got our long-established – and very much cherished – Highbury Spy, Mickey Cannon, Peter Le Beau, Charlie Ashmore and Simon Rose. Quite simply the Gooner wouldn’t be the same without those five wonderful, must-read stalwarts.

Blending the old with the new, we have Arsenal academy expert Jeorge Bird on our young players, as well Coach Mike and his in-depth tactical take. We’ve also got Freddie Cardy on Arsenal Women as ever. We’re also pleased to publish excellent young Arsenal writers such as Freddie, Hal Fish and Ciaran McCloughlin.

We also have the brilliant Keenos, the forensic David Squires, the fascinating Highbury Librarian, passionate songmeister Ben Bennett and Tartan View from Jason Cross - not to mention Steve Pye aka 1980s Sports Blog.

Speaking of new writers, we’re also delighted to have on board Trevor Hills – aka Hillsy – who shares his memorable trip to Ukraine in happier times, as well as being the subject of our latest Super Sub.

With all the latest news from Dial Square and Mike Hennesey’s ‘I Was There’, as well as a special feature on the Gooner’s official charity partner Willow (more of that soon) not to mention Talking Reds and Layth’s Take, we believe we have assembled the biggest and the best stable - or squad if you will - of Arsenal writers, and Arsenal writing, anywhere on the planet in print.

So, whether you’re a loyal subscriber who knows all this already, whether you prefer to buy a copy from our sellers, including the legendary Alex and Richard at games, or whether you haven’t bought one in a while but would be interested in having a read once again, the Gooner Fanzine is for you.

Buy it here and help keep us going in challenging times.

Layth and the current Gooner squad