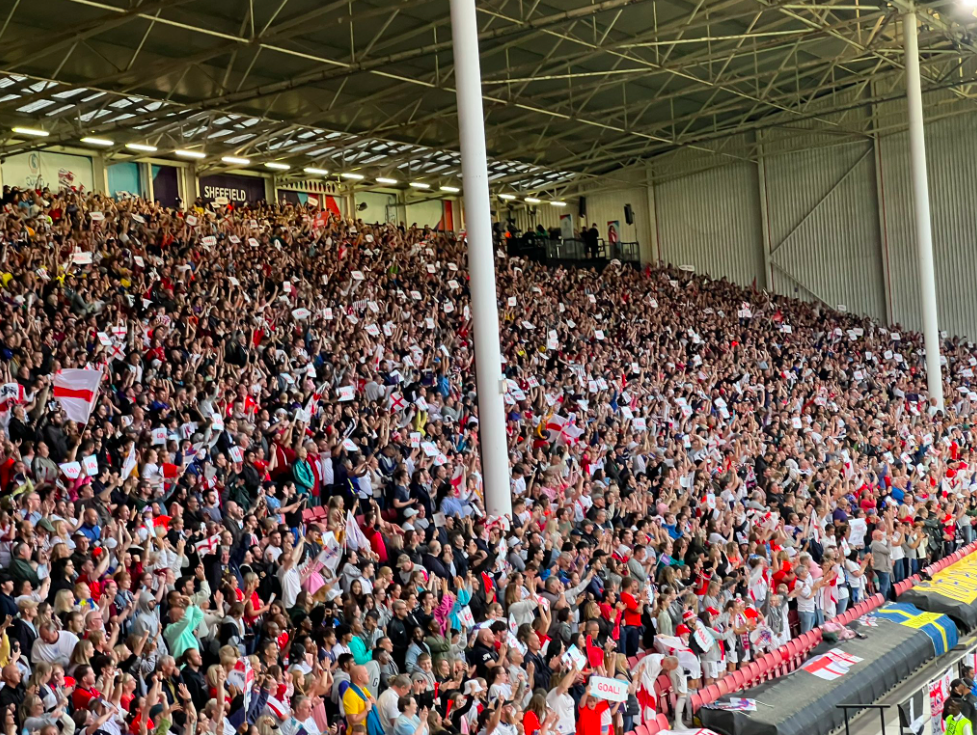 Beth Mead scored England's opener as the imperious Lionesses routed Sweden 4-0 on Tuesday evening in Sheffield to reach the final of the European Championships.

England will now play the winner of Germany or France in the showpiece event at Wembley Stadium on Sunday after a commanding performance from Sarina Wiegman's side.

Sweden piled on the pressure early on, but against the run of play a tremendous finish from Arsenal's Mead put England 1-0 ahead 11 minutes before half time.

It was Mead's sixth goal of the tournament - overtaking Jodie Taylor's five at Euro 2017 which earned her the Golden Boot.

"It's nice to be up there [in the Golden Boot race] but sometimes being chased isn't always the nicest," Mead joked after the match.

"It's nothing I ever thought about being close to. I'm really happy to be where I am but it's not something I'm thinking about - I just want to win with the team."

Mead and her colleagues certainly went a long way to persuading supporters that this could be the Lionesses year three minutes after the interval, when Lucy Bronze headed home to double the lead and make it 2-0.

However, Sweden refused to give in, with Arsenal striker Stina Blackstenius - who hit the woodwork early on in the first half - forcing Lionesses keeper Mary Earps into an outstanding save, tipping over the bar on 65 minutes.

Who knows how influential a goal for Sweden would have been at that moment in changing momentum.

As it was, Alessia Russo continued to be England's super-sub with a goal of outstanding verve on 68 minutes to kill the game off.

Russo's cheeky strike sent the sold-out crowd of 28,624 at Bramall Lane - a record attendance for a Women's Euros semi-final - into raptures, when her backheel made it 3-0 to England.

The fact she deliciously nutmegged stunned keeper Hedvig Lindahl in the process, after seeing her initial shot well saved, made the goal even sweeter.

Fran Kirby's cheeky chip on 76 minutes made it 4-0 and sent the England supporters watching in attendance in Sheffield, and across the nation, into dreamland.

The triumph meant that the Lionesses extended their unbeaten run to 19 games under boss Wiegman.

Victory for the Lionesses ended a 13-year wait to return to the final of a major tournament - with Sunday's opponents set to be either eight-time European champions Germany, or a France side looking for their for their first major trophy.

As for captain Leah Williamson's outstanding England side, glory awaits at the weekend if they can notch one more victory, to turn a memorable summer into a momentous one.

Mary Earps: 8 - Outstanding save to deny Arsenal striker Stina Blackstenius. Who knows how the momentum could have shifted if that had gone in at such a crucual juncture in the second half. Save of the tournament.

Lucy Bronze: 7 - Struggled in her duel with Fridolina Rolfö’s but notched an important goal to make it 2-0 moments after the interval.

Millie Bright: 8 - Excellent in the air against a side that dominate aerial set pieces. Also helped her colleague Bronze down the right channel

Leah Williamson: 9 - Calm and composed. Glory awaits as the Arsenal leader will now take her England team to Wembley on Sunday. One more victory and Williamson will become an England legend to go with already being an Arsenal one

Rachel Daly: 7.5 - A far better showing in Sheffield than on the south coast against Spain last week. Patrolled the left flank and was alert to danger throughout.

Georgia Stanway: 8 - Full of running and bite in the heart of battle

Beth Mead: 9 - Outstanding from the Arsenal attacker who is favourite to win the Golden Boot. Showed character to return to the fray with relish and refused to let her underwhelming display against Spain undermine the near unplayable attacking verve she brings to the side. A dangerous presence who never let the Swedish backine settle

Ellen White: 7 - Ran her heart out for the cause