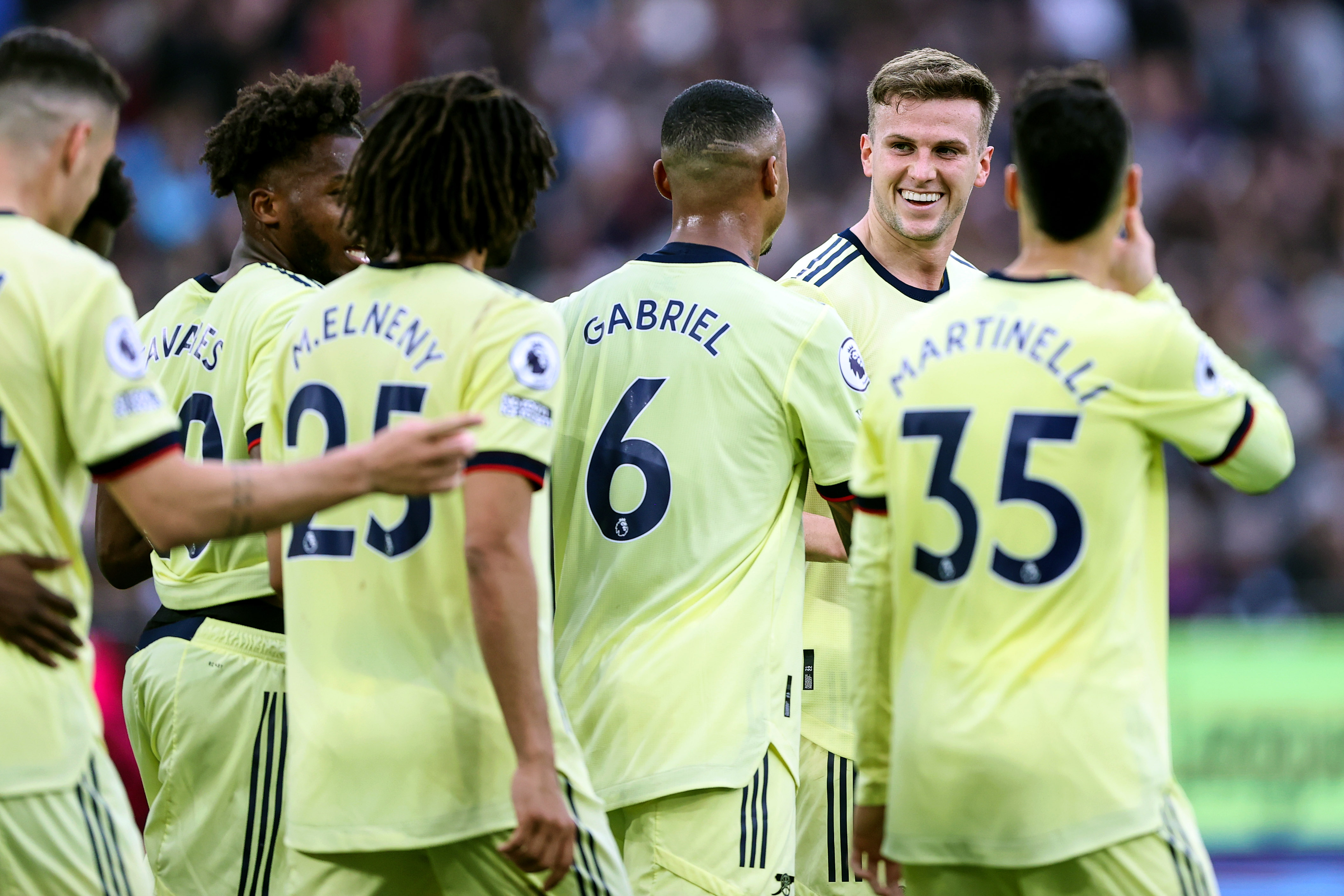 With the news that Mikel Arteta has signed a new deal with the club sure to boost the team ahead of hosting Leeds United at the Emirates this weekend, WIll Jones analyses the Gunners gritty performance at West Ham - and calls for more of the same on Sunday.

The central defensive partnership of Rob Holding and Gabriel Magalhães stepped up to put another vital three points on the board at West Ham.

If Arsenal rode their luck against Manchester United and took advantage of a disinterested Chelsea, this win certainly involved a little bit of both, as well. However, this win seemed to contain more grit, edge and street smarts, demonstrating the characteristics of a top-four team. Importantly, the win also created a situation where if Arsenal beat Leeds and Liverpool defeat Spurs next weekend, Arsenal could secure a top-four finish with a win at White Hart Lane.

"We didn't play so well," said Mikel Arteta after the 2-1 win. "If I have to use a word it would be we won ugly. Big teams have to find a way to win ugly when they don't play well. We found a way through set pieces and defending strongly. To win here at West Ham is credit to boys and shows the spirit we have."

The two goals, the first from Holding and the second from Gabriel, were marked by their physicality during a game where Arsenal was able to match West Ham’s intensity. The win showed that even as Arsenal’s defensive performances of late have left fans with their hearts either on the floor or in their mouths, they are not solely reliant on the exploits of an inexperienced forward line to win games.

Given West Ham’s early-season form that turned them into top-four contenders, this fixture should have been approached with more trepidation. However, with Moyes’ slimline squad going deep in the Europa League and a defensive crisis, the Scot made five changes to the side that lost 2-1 to Eintracht Frankfurt midweek his team which seemed to create an opening for Arsenal to take all three points and maintain a two-point lead over Tottenham.

Arteta made three changes to the side that beat Manchester United, including two to the back four. After a handful of stoppage-time minutes against Manchester United, Takehiro Tomiyasu made his first start since New Year’s Day while Ben White’s tight hamstring gave Rob Holding a place in the starting eleven. Meanwhile, at the other end of the pitch, Emile Smith-Rowe could once again count himself unfortunate to drop to the bench as Arteta favored Gabriel Martinelli.

Arsenal battled through the first half, failing to make any clear openings for themselves but, for a change, did not give West Ham much opportunity either. After Holding shrugged off his marker to make it 1-0, Jarrod Bowen leveled before half-time. In front of a raucous crowd, some Arsenal teams may have folded, particularly when they aren’t playing well. Yet, this Arsenal is unpredictable and Gabriel made it 2-1 early in the first half.

As the game reached the hour mark, Arsenal are usually looking to the bench for attacking reinforcements. However, compared to—Smith-Rowe, Alexandre Lacazette and Nicolas Pepe—Sambi Lokonga and Cedric Soares were the only viable options to come on and protect the lead. Usually, Holding is Arteta’s first option for such a job. Yet, Arsenal managed the rest of the game well. Even the introduction of Michail Antonio wasn’t enough to trouble the backline. The only notable sour notes in the game were Aaron Ramsdale getting himself into hot water with an onrushing Bowen and Tomiyasu being substituted on 80 mins with what appeared to be an injury.

Leading up to the game, William Saliba occupied a large portion of the Arsenal Twittersphere. Only one clean sheet in the last 10 games and some rather abject defending have put the defensive unit under scrutiny. However, Holding’s player of the match performance at the London Stadium, which featured one goal, three blocks, six out of six aerial duels won and seven clearances, according to Squaka, may quieten some of the negativity.

Holding’s renaissance must be acknowledged. In the FA Cup Third Round against Nottingham Forest, the Championship team chose not to press the defender since he was perceived to pose such little threat with the ball at his feet. Since then, however, Holding has exhibited his strengths, most notably winning aerial balls like he was defending the Alamo during the 1-0 victory over Wolves at Molineux and emerging from the bench to see out the win at Aston Villa. Further, Holding has proved to be a leader whether he is selected or not, calling out racist abuse from the crowd while warming up on the sidelines at Elland Road.

Yet, this summer may provide crucial for Holding and the rest of Arsenal’s rearguard. At the end of the season, William Saliba will return to the club after an impressive year at Marseille. The Frenchman will report for preseason with two years remaining on his contract, his first international cap under his belt, a host of suitors from around Europe and a decision to make about whether he wants to bet the next few years of his career on Arsenal and Arteta.

Also, despite Holding’s performances this year, his position is under review, too. With rumored interest from Newcastle, the club faces a decision about whether the £2 million signing from Bolton in 2016 is good enough to be one of the club’s four center backs.

Meanwhile, after another unimpactful performance from Martinelli, another Brazilian could be starring in red and white next season. Gabriel Jesus, who has scored six goals in his last three starts, is rumored to be on the way out of Manchester City this summer. And despite Eddie Nketiah’s tireless performance where he harried, pestered and ploughed his own field, goals win games and chance conversion would surely leave England U-21s’ all-time top scorer saying goodbye at the end of the season.

Arteta’s assessment of the win at the London Stadium was spot on. However, with the next two games pitting Arsenal against sides who have something to fight for—Leeds United and Tottenham—Arsenal will need to do more than win ugly, ride their luck or rest on the fact the opposition isn’t interested.