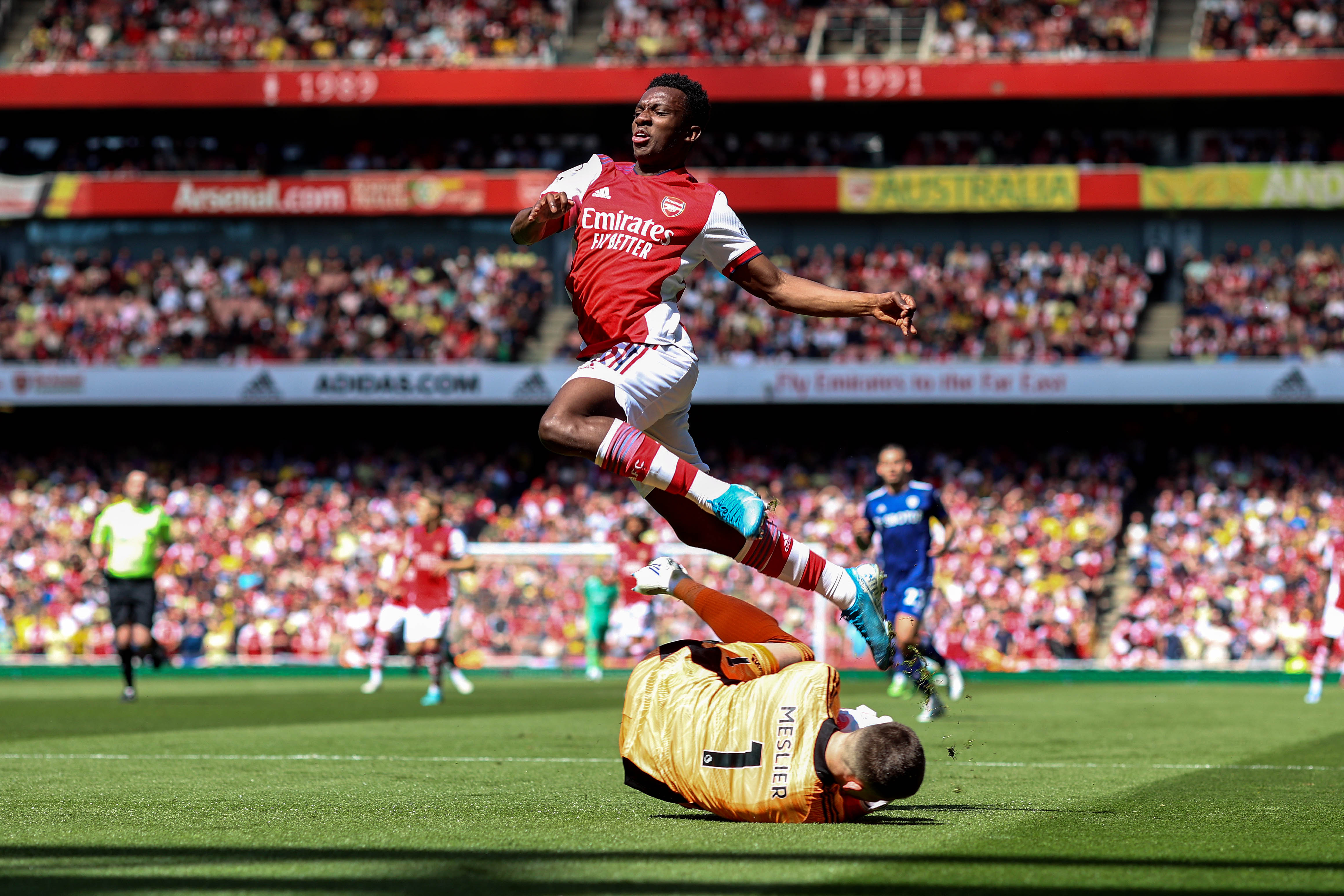 Arsenal consolidated fourth place after easing past Leeds United 2-1 at Ashburton Grove on Sunday afternoon as Jessie Marsch’s beleaguered ten-man side dropped into the relegation zone.

Two early goals from former Leeds loanee Eddie Nketiah set the tone for the day to calm Gunners pre-match nerves, after rivals Spurs grabbed a point in a 1-1 draw against Liverpool at Anfield on Saturday evening.

The task was made easier when Leeds captain Luke Ayling was eventually sent off for a reckless two-footed challenge on Gabriel Martinelli before half an hour had elapsed - even if Mikel Arteta’s in-form side were already two goals to the good, prior to Diego Llorente’s second half strike.

The home side were helped by Marsch’s commitment to playing out from the back, which at best was highly questionable. However, in a struggling side it was simply foolhardy. And so it was to prove as early as the fifth minute, when Nketiah chased down keeper Illan Mesler to steer the ball home.

The lead was doubled five minutes later when Nketiah grabbed his second after Martinelli showed excellent persistence down the left flank. The Brazilian attacker pulled the ball back for the lively Nketiah to angle the ball home and send the home support into raptures.

It might have been a gloriously sunny afternoon in North London, but the mood was decidedly darkened on 27 minutes when former Arsenal apprentice Ayling inexplicably launched a disgraceful two-footed ‘tackle’ on Martinelli.

While the crowd was rightly outraged, referee Christopher Kavanagh decided in his wisdom to initially award a yellow card. As tempers flared and the crowd bayed, VAR instructed the official to think again. One monitor check later the man in the middle changed his mind and handed Leeds captain Ayling a deserved red card, dishing out a yellow to Raphinha along the way for persistent dissent.

Strangely the sending off calmed the game thereafter, as Arsenal attempted to add to their dominance against Marsch’s ten men.

Yet, it would be the visitors who grabbed a goal back on 66 minutes when former Real Sociedad defender Llorente fired home at the near post after Junior Firpo’s header, to make the final score 2-1.

The pressure continues at both ends of the Premier League.

Leeds now have two crucial home games this week in a bid to boost their all-too real fight against relegation. Unfortunately for Marsch and his increasingly beleaguered team, they are against high-flying Chelsea and in-form Brighton, who despatched Manchester United 4-0 on Saturday.

Arsenal now gear up for their game at Spurs on Thursday in what will be the most important North London derby in more than a decade.

Cedric: 7/10 - Put in a shift down the right side while always looking to supplement colleagues further forward

Rob Holding: 7/10 – Continued to build on his partnership with Gabriel after an excellent game against West Ham last weekend

Takehiro Tomiyashu: 7.5/10 - Dovetailed well on the left with Martinelli and showed defensive resilience in an unfamiliar position on the left

Mohamed Elneny: 7/10 - Has showed excellent form since coming into the side following Thomas Partey’s injury but against a beleaguered Leeds side he didn’t have to be anything other than consistent. Which he was

Granit Xhaka: 7/10 - Another whose form has been excellent over the last four matches. The mark of a good player is do perform when the pressure is on and the Swiss midfielder has shown outstanding discipline. As he did against Leeds to help steer the team home

Bukayo Saka: 7/10 – Not as influential as would have liked but hard to comprehend that this wonderful homegrown talent is still only 20 years old

Martin Odegaard: 7.5/10 – Unlucky with a second half strike that flew narrowly wide. A class act and a delight to see the Norway captain further press his claims to be handed the Arsenal captaincy on a long-term basis

Eddie Nketiah: 8/10 - Two early goals calmed nerves and was reward for a lively overall display. Showed persistence in chasing down Meslier for the first with a clinich finish for the second. Perhaps motivated by frustrations during an underwhelming spell at Leeds last season under former Elland Road boss Bielsa

Gabriel Martinelli: 7.5/10 Always full of running and his persistence in driving downt he left flank to cross for Nketiah’s second proof of his strength and desire, to go with his undoubted talent. The victim of an horrendous two footed challenge from former Arsenal academy youngster and now Leeds captain Luke Ayling