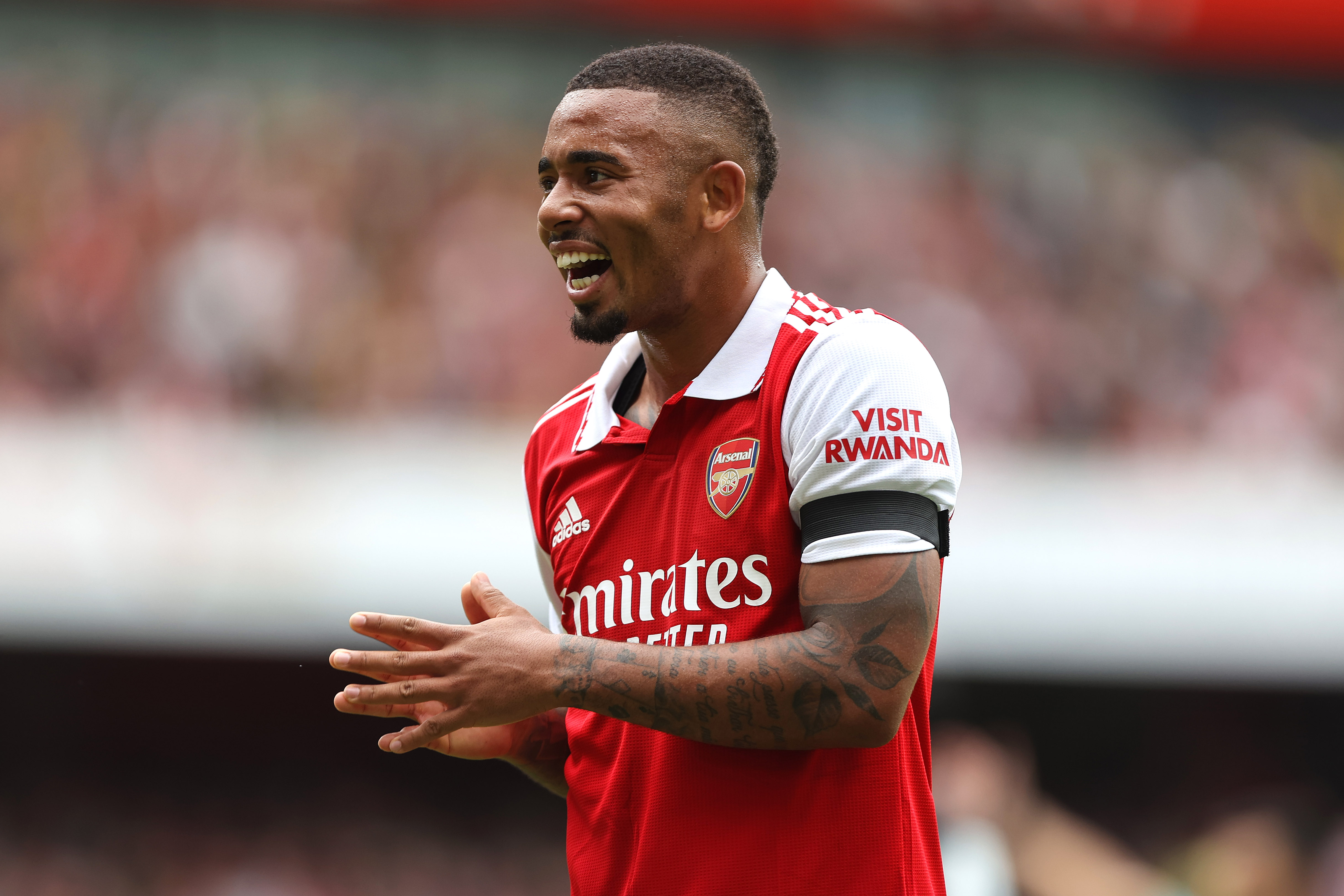 Good on crosses: Gabriel Jesus grabbed a treble as Arsenal routed Sevilla 6-0 at the Emirates on Saturday. CREDIT: OFFSIDE

Arsenal routed Seville 6-0 at the Emirates on Saturday lunchtime.

Gabriel Jesus grabbed a hat-trick as Arsenal wound-up their pre-season with an impressive 6-0 win over sorry Sevilla, whose keeper Bono wanted to run, wanted to hide, wanted to tear down the walls that hold him inside.

Arsenal's new Brazilian Jesus, scored two goals in three minutes in his first match at the Emirates, before adding a third in the 76th minute.

Bukayo Saka scored a brace, including an early penalty, with Eddie Nketiah adding a sixth after a sweeping move started by Granit Xhaka's nutmeg, in the 89th minute.

Mikel Arteta's side were led out by Martin Odegaard, who has been named as the Gunners' new captain.

Prior to kick-off there was a minute's applause for the late Terry Neill, who sadly passed away this week at the age of 80. Former Arsenal Invincible and ex-Seville player Jose Antonio Reyes was also honoured.

In other news, Kieran Tierney took part in the squad's post-match warm-down after the final whistle

Good to see Kieran Tierney involved in Arsenal’s post-match warm-down here at the Emirates after the Gunners beat Seville 6-0 pic.twitter.com/WdEivTxPFw

Find out which players impressed with our Gooner Fanzine Player Ratings

Aaron Ramsdale: 8/10- With Seville keeper Bono having a busy day at the other end, Arsenal would have won with, or without, Ramsdale today

Ben White: 8/10 - Interesting to note Arteta used him as a right-back to accommodate Saliba in the middle of the backline

William Saliba: 8.5/10 - Good to see French defender finally play for Arsenal at the Emirates. Also good to see him win his duels. Comfortable in brining the ball out from defence. Blessed with pace. The real challenges are ahead but a nice start in North London

Gabriel: 8/10 - Solid. Commanding. Are we seeing the birth of a new central defensive partnership

Oleksandr Zinchenko: 8/10 – A reliable performance from the new signing from City, who already looks to be making a strong claim for the left-back berth

Granit Xhaka: 8/10 – Credit where credit is due. An assured performance capped by his nutmeg at the start of the sweeping move for the sixth goal, scored by Nketiah

Martin Odegaard: 8/10 - Announced as official captain before the game. An excellent choice for an excellent player

Bukayo Saka: 8/10 - Scored the early penalty he won to leave Seville keeper Bono stuck in a moment he can’t get out of

Jesus: 9/10 – And lo they said: Come Fourth Jesus. And he did reply: After the pre-season we’ve had I want third at least. A glorious hattrick on a Beautiful Day