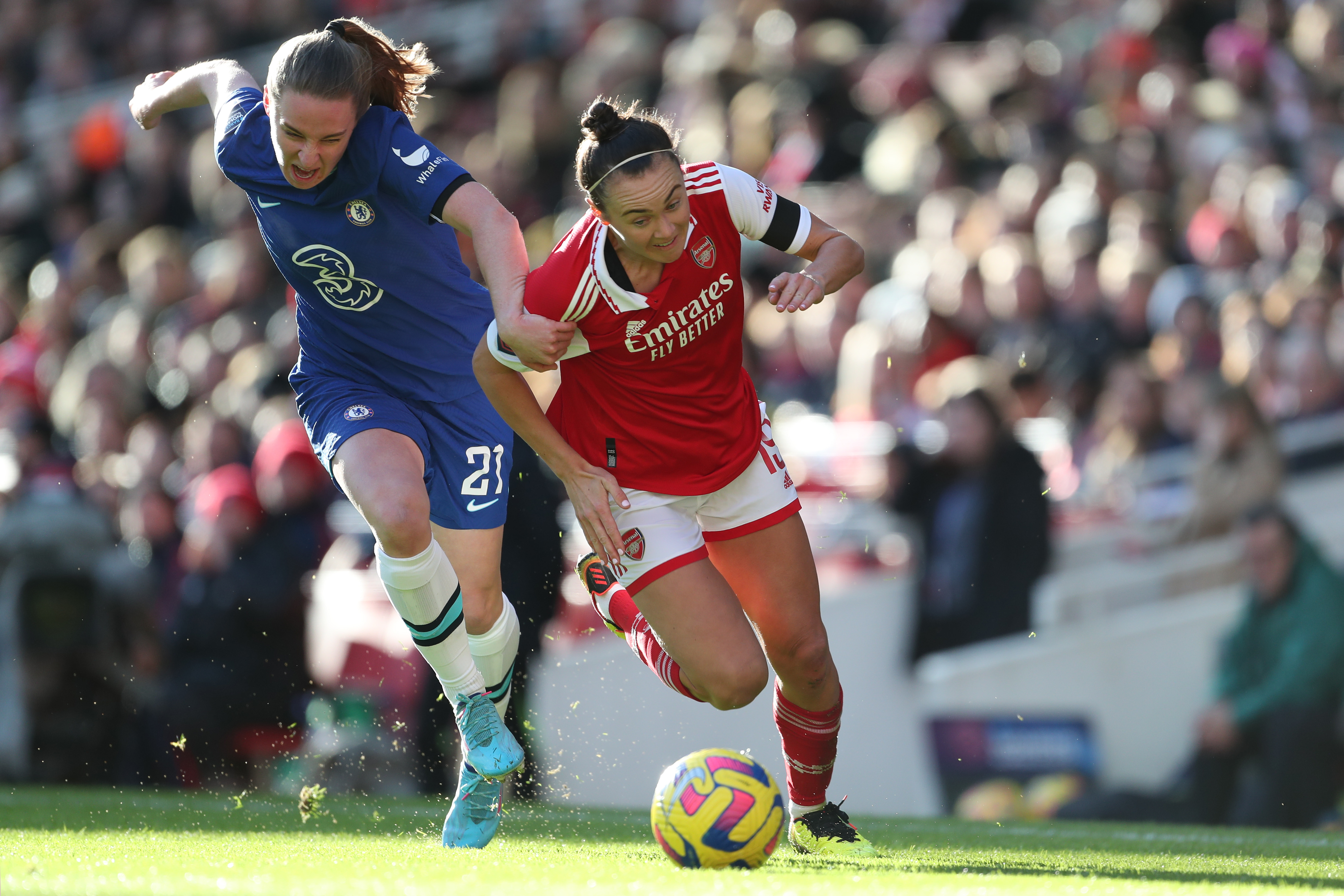 A late Sam Kerr equaliser denied Arsenal the chance to pull level at the top of the Women’s Super League on Sunday lunchtime.

Kerr’s header in the 89th minute levelled Gunners captain Kim Little’s earlier spot-kick, as it proved to be honours even after an absorbing London derby clash between the WSL’s two top teams.

It would be hyperbole to call this clash a season defining fixture with so much football still to be played, but the result of this London derby has huge ramifications for the rest of the campaign for both sides.

If Arsenal had emerged victorious through a second half penalty from captain Little it would have given the home side a crucial triumph. Alas, for those in red and white, it was not to be.

The day started with first playing second, with Jonas Eidevall's side only three points behind having played one game fewer - and ended with Kerr’s goal ensuring Arsenal still remain three points behind, with the Blues easing to 28 points.

Chelsea may have won their last nine but prior to kick-off the Gunners had only lost once this term, with the memory of their stirring 3-2 victory at the start of last season still fresh in the minds.

While that match that was played at the Emirates back in September 2021 featured a strike from Viv Miedema and a brace from Beth Mead - both missing with long-term injuries this time around - the crowd was only 8,000.

Fast forward 16 months and one memorable Lionesses European Championship tournament victory, Sunday lunchtime's match had seen 46,811 tickets sold, with the majority in the crowd on a sunny North London afternoon going home frustrated, following Eidevall's side being pegged back at the death.

Arsenal's new January signing, keeper Sabrina D'Angelo was on the bench to provide backup to Manuela Zinsberger, while Gio Queiroz returned to North London after her spell at Everton on loan. The 19-year-old Danish international Kathrine Kuhl, who arrived earlier this month from FC Nordsjælland on a permanent deal, was also a substitute.

Victoria Pelova, a 23-year-old Dutch midfielder, who impressed for Ajax during Arsenal's victorious two-legged Champions League qualifier back in September was also snapped up by Eidevall to bolster Sunday's bench.

Chelsea once again opted for the world class Sam Kerr up front – now seven goals in seven games with one assist after this match - to underline the leaders' prowess. It was no wonder Emma Hayes Blues started the match as befitted a free-scoring team, the West Londoners topping the WSL scoring charts with 31 goals before referee Emily Heaslip's first whistle blew.

Lauren James drove through a backpeddalling home defence to fire narrowly the wrong side of Gunners No1 Zinsberger's far post in the opening moments, mirroring her older brother and Chelsea and England men's international Reece, in showcasing such attacking intent.

Yet it was Eidevall's side that dominated thereafter, with Lina Hurtig and Caitlin Foord testing Blues net minder Zecira Musovic, with ten minutes barely elapsed, prior to Frida Maanum firing at the Swedish international, before testing the 26-year-old again shortly afterwards. Hurtig then fired into the side netting after being fed by Maanum on the half hour mark.

With both sides vying for supremacy but neither yielding an inch, it was no surprise to learn in the Super League era that the head-to-head after 22 matches was nine wins each, with four draws. Something had to give.

Bolstered by the heartwarming half-time appearance of, now, former, Arsenal star, Jordan Nobbs - who rightly received a rapturous ovation from the home crowd in recognition of her unstinting 12 year service - the Gunners came out full of attacking verve after the interval.

Hurtig nearly put the Gunners moments after the break, first with an ambitious long-range shot from the right flank that nearly stunned Musovic in the Chelsea goal, prior to the Blues keeper blocking the Swedish striker's powerful header.

It was a warning Hayes' side failed to heed.

The industrious Foord powered down the left flank and was felled as she made her way into the box by the visitors No21 Niamh Charles, leaving referee Heaslip no option but to award a penalty.

Despite vigorous Chelsea protests led by Lioness Millie Bright, amid the maelstrom, up stepped captain Little to calmly slot home past Musovic to make it 1-0 to the Arsenal on 57 minutes. In truth it was a lead Eidevall's side fully deserved.

However, like all excellent teams, going a goal down only stung Chelsea into further action, with James, then Sophie Ingle firing over during a spell of concerted pressure shortly afterwards, as the visitors attempted to claw back the damaging deficit.

Despite Catley nearly doubling the lead when her long-range cross-cum-shot forced Musovic to touch the ball onto the bar, with a matter of seconds left in a hard-fought match, Kerr’s late, late header from No28 Jelena Cankovic's cross guaranteed that Chelsea were to end the match with a share of the spoils.

On this evidence, the welcome return of the WSL promises much over the coming weeks and months.

Leah Williamson: 8/10 - Already an Arsenal legend. And played like it. A class act

Steph Catley: 8/10 - So impressive in such an important role

Kim Little (c): Captain, leader, legend. The calmest player on the pitch to slot home such an important spot-kick

Lina Hurtig: 7/10 - Deservedly earned her round of applause prior to being replaced by Katie McCabe

Caitlin Foord: 7.5/10 - Another in red and white who did her best to give Chelsea the Blues prior to Kerr's late heartbreaker