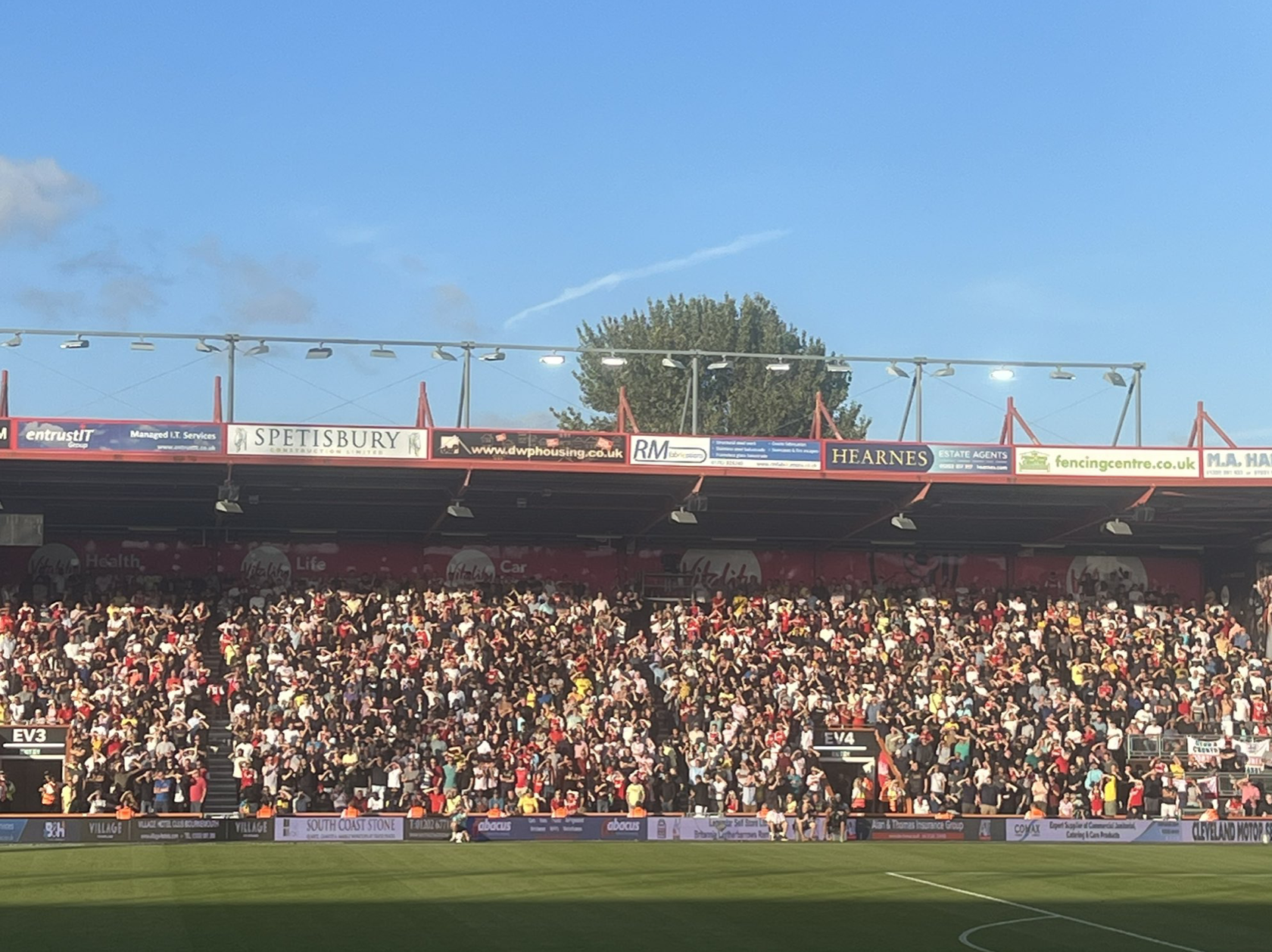 Find out which Arsenal players impressed after the Gunners beat Bournemouth 3-0 on the south coast. PICTURE: Loyal travelling Gooners at Bournemouth. CREDIT: @laythy29

Mikel Arteta’s imperious Arsenal eased to a 3-0 victory over Bournemouth on Saturday evening.

What a difference a year makes. This time 12 months ago Arsenal were rock bottom of the Premier League after three defeats from three.

This August the North Londoners top the table after three victories from their trio of opening games.

The visitors dominated Scott Parker’s Cherries throughout the match and a third goal duly arrived when the excellent William Saliba netted with an audacious strike to seal the three points and continue Arsenal’s superb start to the campaign.

The Arsenal team and the vociferous travelling Gooners celebrate after Mikel Arteta’s impressive side beat Bournemouth 3-0 here on the south coast top the Premier League after three games pic.twitter.com/TfiHbgSqGw

Boss Arteta also showed his class during his post-match press conference by dedicating this victory to the late Steve Braddock.

Find out which players impressed during the Gunners 3-0 victory with our Gooner Fanzine Player Ratings:

Aaron Ramsdale: 7/10 - Two clean sheets from the opening three games of the season as the rampant Gunners top the table

Olexsandr Zinchenko: 8/10 - Another assured performance offensively and defensively. One of the (many) things that impresses about him is the fact he’s always on hand to receive a pass. Takes plenty of football courage to always be on hand to do that

Gabriel: 8.5/10 - Striking up what could well prove to be an iconic partnership at the heart of the Arsenal backline with colleague Saliba

William Saliba: 9/10 - Early days of course even if he’s improving all the time, certainly from the raw kid I saw get sent off for Arsenal U21s at Wimbledon in the Papa John’s Trophy a couple of years ago, but can I just say isn’t it wonderful to see Saliba thriving in the Arsenal first team. An outstanding strike for his side’s third goal. No wonder the vociferous travelling Arsenal supporters sang his name repeatedly throughout the match

Ben White: 8/10 -Solid at right-back. Again. Also underlining the fact that Arteta is near to having two players of quality compete for the same position

Martin Odegaard (c): 9/10 - Two goals in the opening 11 minutes from the increasingly impressive Gunners captain effectively sealed the match. Such a shame the world was denied the chance to savour his outstandingly perceptive through-ball for Jesus that VAR ruled out for offside

Gabi Martinelli: 8/10 - Never stopped running for the Arsenal cause

Jesus: 8/10 - Driving run at the heart of the backpedalling Cherries backline was the catalyst for the Gunners opening goal in the opening stages. VAR denied him a goal after a clinical finish

Bukayo Saka: 7/10 - Engaged in a duel up and down the right flank primarily with Cherries No33 Jordan Zemura

Emile Smith Rowe: 7/10 - On for captain and two goal hero Odegaard to follow up his cameo appearance at Meadow Park on Wednesday evening for the U21s

Eddie Nketiah: 7/10 - Swapped with Martinelli as the clock ticked down

Kieran Tierney: 7/10 - Came on for Saka with moments remaining

Albert Sambi Lokonga: 7/10 - On for Xhaka with a matter of seconds left

Absolute class from Arsenal boss Mikel Arteta as he concludes his post-match presser here at Bournemouth by dedicating the victory to the late Steve Braddock pic.twitter.com/gYWAtCKpkG

That’s me done at Bournemouth after Arsenal make it three wins out of three to top the Premier League. I have to say Mikel Arteta always conducts himself with dignity but the way he dedicated this victory in his post-match presser to the late Steve Braddock was different class pic.twitter.com/QyXijHrVum