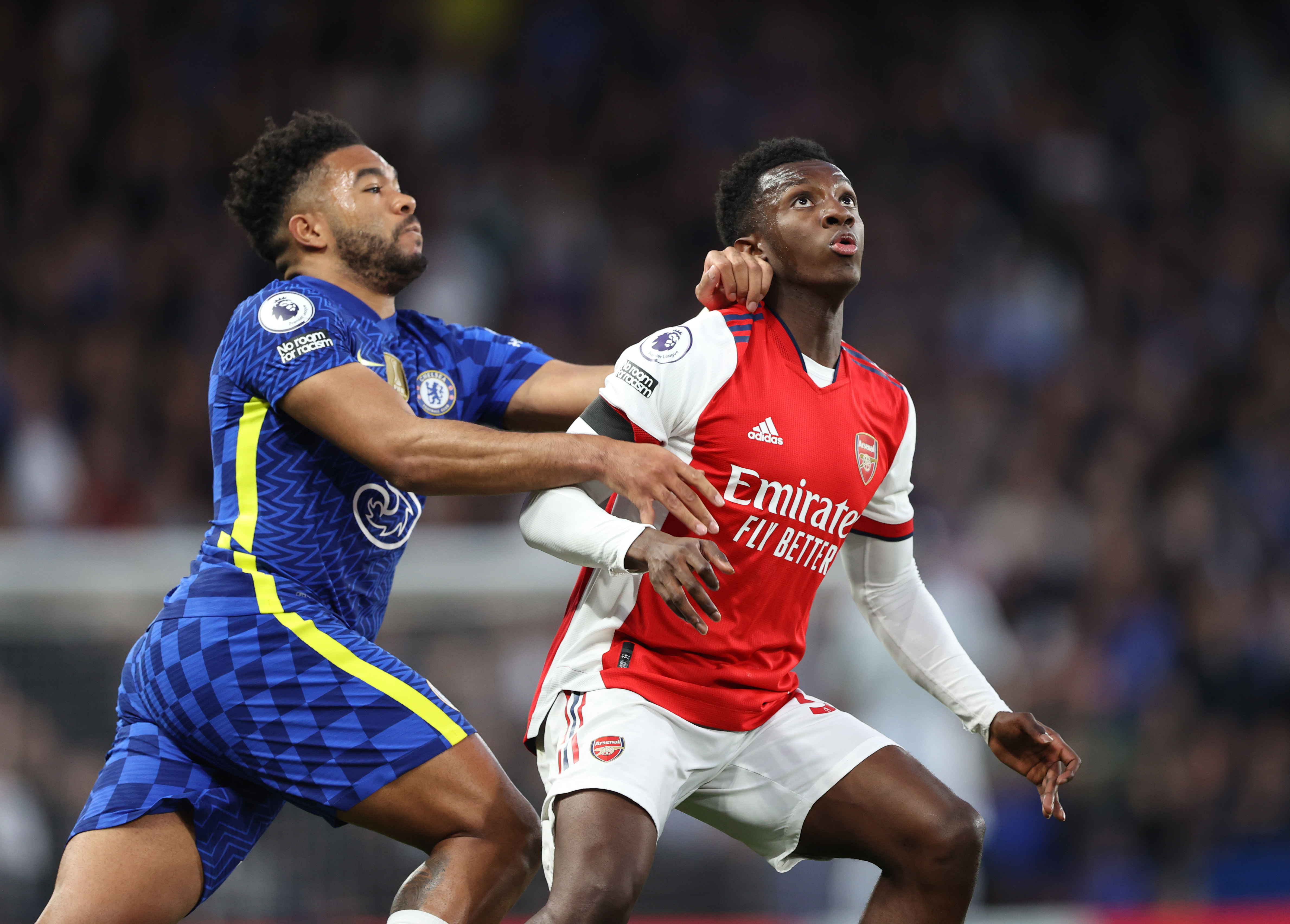 Arsenal beat Chelsea 4-2 with an outstanding attacking performance to ignite their previously fading Champions League hopes, in front of 32,249 at Stamford Bridge on Wednesday evening.

Eddie Nketiah grabbed the headlines with his first Premier League goals of the season, with brace against the club that released him at the tender of age of 16, insisting he was too small for them.

The Lewisham-born 22-year-old proved them wrong on a memorable night for the Gunners, while Emile Smith Rowe and Bukayo Saka also scored, as Mikel Arteta's side ended their dismal run of three defeats on the bounce with a thrilling victory.

In his best game in an Arsenal shirt, the lively Nketiah broke through the Chelsea backline, pouncing on a poor backpass from the underwhelming Andreas Christensen - expected to join Barcelona this summer - before evading N'Golo Kanté to slot home with aplomb past Blues keeper Edouard Mendy, and put Arsenal 1-0 ahead after 13 minutes.

Thomas Tuchel’s side were not to be deterred, with Timo Werner cutting inside to level 240 seconds later, when his shot evaded Aaron Ramsdale via a deflection off Granit Xhaka, after Ruben Loftus Cheek won the ball back to feed the German attacker.

Smith Rowe - who grabbed the winner when Arsenal won at Chelsea last season - then put the Gunners 2-1 ahead after an outstanding team goal with a move that started in their own box.

The flowing move culminated in the academy graduate guiding the ball past Mendy with a low right-footed curler into the far corner on 27 minutes, after being fed by Arsenal's captain for the evening, Martin Odegaard on the edge of the box.

In a pulsating match Chelsea levelled again to make it 2-2, when captain Cesar Azpilicueta nipped in to guide the ball past Ramsdale from close range following Mason Mount’s cross. And to think there were only 32 minutes on the clock.

Like two prizefighters slugging it out to a standstill, there was no surprise that the phenomenal pace dropped slightly, even if there was still time for Alonso fire high over the bar for Chelsea. While the quick feet of Smith Rowe space for a chance that he angled narrowly wide.

Everywhere you looked Arsenal showed fight and courage. Not least through a disciplined performance from Granit Xhaka - who completely eclipsed his jaded looking Chelsea counterpart N'Golo Kante - alongside the eye-catching urgency of Mohammed Elneny.

The intense pace continued after the interval which saw the persistent Nketiah squeeze the ball home ten minutes into the second half to make the scoreline 3-2 to Arsenal. The goal prompting a wild eruption of joy between players and visiting supporters behind the goal.

Faltering £97.5m Chelsea striker Romelu Lukaku was hooked by Tuchel on the hour mark with debate sure to intensify about his long-term future in west London.

The match was also notable for the first limited crowd at Stamford Bridge, after former owner Roman Abramovich was sanctioned by the UK government for his ties to Russia's Vladimir Putin - the gate was 10,000 down on what could have been expected, with only Chelsea season ticket holders and the travelling Arsenal contingent allowed to buy tickets.

The visitors' vibrant performance was made even sweeter by the realisation that the depleted Gunners were without the influential Thomas Partey,  Kieran Tierney and long-term absentee Takehiro Tomiyashu.

As an exciting game drew to a close Saka was hauled down by Azpilicueta, following a cross from substitute Cedric.

Showing character, the 20-year-old attacker stepped up to seal the match with his first penalty since the Euro 2020 final at Wembley last summer - and a never to be forgotten victory that surely indicates that the balance of power in London is once again shifting from west to north, after residing so long at Stamford Bridge.

As if to underline the shift, Blues leader Azpilicueta embroiled himself in an unseemly row with a set of Chelsea fans at the final whistle.

No wonder the loyal and vociferous 3,000 travelling Arsenal supporters sang loud and proud into the night after Tuchel's side conceded 11 goals in their last three home games, as the race for Champions League qualification revved up once again.

With the Gunners drawing level with Spurs with six games to play, who knows how this absorbing - and utterly unpredictable - season will end.

All we know in this enthralling race is that Arsenal host fast-fading Manchester United in the early kick-off on Saturday lunchtime, while Gunners rivals Tottenham travel to resurgent Brentford.

Aaron Ramsdale: 7.5/10 - No chance with the Werner’s deflected goal

Ben White: 7.5/10 - Comfortable driving the ball out of defence

Rob Holding: 7/10 - Not an en tirely convincing display but one that helped his side to a memorable victory

Granit Xhaka: 8/10 – Disciplined. And a disciplined Xhaka is an excellent player. So much so that you can also say he eclipsed N'Golo Kante

Martin Odegaard: 8/10 - Showed leadership qualities to go along with his footballing talent as he tried to dictate play with his character as much as his creativity

Bukayo Saka: 8/10 - Operated as an auxiliary wing-back at times. Showed quality and composure to score his late penalty and seal a memorable victory

Eddie Nketiah: 9/10 - Broke through to slot home with aplomb to put the Gunners ahead. Showed persistence to score his second in what was his vest performance in an Arsenal shirt

Alex Lacazette: 7/10 - Swapped with Saka after five minutes of added time. Wants Champions League football. After such a stunning performance from his yopunger colleagues the club may yet qualify for dreamland even if the old stager won't be here