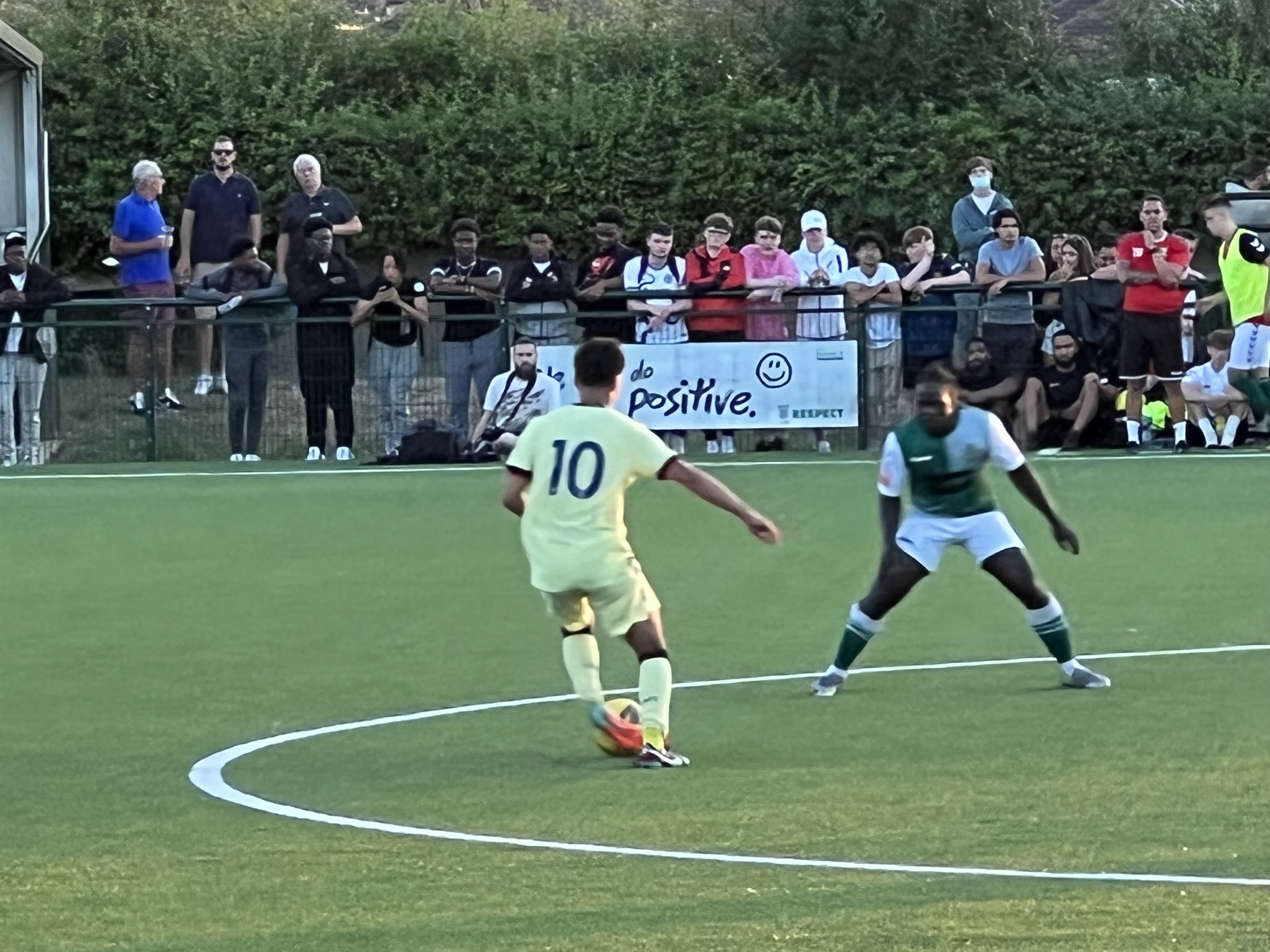 Dave Diedhiou put the home side ahead before Kaleel Green equalised before the break.

The young guns were reduced to ten men before the interval when captain Bradley Ibhrahim was harshly handed a straight red card.

The match marked Wilshere’s first game in charge, after being appointed at the Arsenal Academy earlier this month following his retirement as a player.

Wilshere served the Gunners with distinction during his career in north London and his return to the club has delighted many supporters.

Yet it was Hendon’s rising managerial star in non-league circles, Lee Allinson, who had reason to be pleased in the opening stages as his side went 1-0 up through Diedhiou.

The 33-year-old earned his place in the Don’s history by scoring their final goal at their long-lost Claremont Road in deepest Cricklewood nearly 15 years ago. He certainly showed he hadn’t lost any of his goalscoring instincts by slotting home No7 Rohdell Gordon’s cross from close range.

The young guns levelled just after the half hour when No8 Green had the final touch after a goalmouth melee in a crowded box to make it 1-1.

As the clock ticked down towards the interval, Dons’ centre back Tarik Moore-Azille nodded onto the barith the ball flying over Brian Okonkwo’s woodwork and to safety.

Just as both sides were gearing up for half time, referee Chris O’Donnell handed a straight red to Arsenal captain Bradley Ibrahim after an ungainly challenge near the dugouts. The decision was harsh on the youngster when perhaps the official should have first used a little discretion in this pre-season friendly.

As the sun set, and temperatures cooled, on-pitch fervour also faded somewhat, when Wilshere rightly opted to make a further raft of substitutions, to go with the three he made during the interval.

BRIAN OKONKWO: 7 - Swapped at half time for Alexi Rojas

MICHAL ROSIAK: 7 - The 16-year-old has already earned U15 Polish international honours and looked composed on the 3G pitch

JOSH NICHOLLS: 7 - Versatile full back who can play on the right even while donning the No3 shirt as he did against Hendon. Full of running allied with burgeoning positional awareness

COBY SMALL: 7 - Another product of the club’s Hale End academy the No4 has already been capped by England at U15 level

MALDINI KACURRIE: 7 - The Albanian U17 international was snapped up after being released by Fulham and is another of the Gunners scholarship intake for this term

BRADLEY IBRAHIM (captain): 5 – Handed a straight red card for an ungainly challenge near the dugouts. Perhaps referee Chris O’Donnell could and should have showed more discretion in this pre-season friendly rather than sending off the distraught youngster.

SEB FERDINAND: 6 - Another who was replaced during the interval. Not as influential as he would have liked to have been against the Dons during his 45 minutes

AMARIO COZIER-DUBERRY: 8 - An assist for the Green’s equaliser from the impressive No8. Never let the home side’s backline settle

KALEEL GREEN: 8 - Slotted home from close range in a crowded box to grab an equaliser for the young guns

ETHAN NWANERI:  7 - The 15-year-old is highly regarded at  the club and while he will play regularly for the U15 and U16 sides he is expected to make an appearance or two in the U18s

OMARI BENJAMIN: 7 - Fired over when well placed in the first half after a driving run. Always a lively presence.

Alexi Rojas: 8 - Came on for Okonkwo during half time. Not afraid of physicality in a crowded box. Decision making when opting to punch was good

Kamani Ryan: 7 - Entered the fray after the interval

Ismail M’Hand:  7- Another who came on after the break

Cam’ron Ismail: 7 - Came on as part of a raft of substitutions midway through the second half