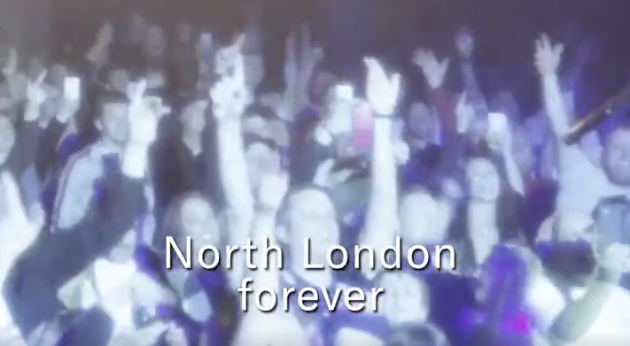 As I write this whilst preparing myself for the trip to the Olympic Stadium where The Arsenal face West Ham, I also reflect finally on what a week it has been.

Work has been manic but also the phone has been red hot!

A little while ago a fellow Gooner Marios said to me it would be great to get a song going to the Louis Dunford track ‘Angel’ and I thought that would make an amazing Arsenal anthem.

From that moment I loved it. I listened to it a good few times, but due to other distractions the idea run away from me to push something out.

On Wednesday another fellow Gooner and loyal travelling supporter Colin, who I need to mention as he hasn’t been very well since the turn of the year, gave me another nudge, as we’d seen a video of Louis performing the track at what looked like a brilliant gig at The Union Chapel in Islington on Thursday (April 21).

Another message from die hard fan Joanne Tester and Gav at She Wore a Yellow Ribbon and that was it.

Originally I’d love to have seen the words 'The Arsenal' in somewhere, but the chorus is just perfect anyway - and tops off what is an incredible song.

So, after many retweets and many others including Highbury Way, Ruth Beck Art, pushing out the video clip of the chorus being sung at The Union Chapel - the whole of social media was going Louis Dunford mad!

From Thursday right through till now social media has been crazy and with the help from every Arsenal fan out there we have made Louis reach an extra 14,000 Twitter followers and counting.

Without being born from North London, the engagement I have though with the song not only makes me so proud to be The Arsenal which I obviously am anyway, but I feel very connected to the community.

I think I’ll speak on behalf of every fan also born or brought up from outside of the manor of Islington: Louis deserves all the praise he gets from this and without doubt will become a very popular artist.

Not only the track ‘The Angel’ is already a massive hit, The album ‘The Popham EP’ is very much one to really give a listen and will be as popular.

Fourteen years ago he tragically lost his best friend and massive Arsenal fan also Ben Kinsella at a London bar.

Having been through a devastating loss myself of my mother when I was young, where he has got to now Ben will be so proud.

Louis has been through some very tough times and he thoroughly deserves all the success that will come his way.

Over the course of the season as a fanbase we have grown a togetherness to be proud of again and on the pitch the players believe in the meaning of playing for the famous Arsenal jersey.

Mikel Arteta has brought this feeling back again but over the course of the last four days especially the Arsenal family has become even stronger and unified - thanks to Louis Dunford and his amazing song.

Its all down to himself and Arsenal to make his amazing track ‘The Angel’ an even bigger success - but importantly we have an anthem to play out at the Emirates Stadium before kick off.( I’ll add may have to edit some lyrics of the song Louis to make it cleaner!)

Without no question he has the full backing of the Arsenal faithful.

The chorus is outstanding and if we all haven’t been singing along to it this week then I know many going to West Ham will be singing it in the pub and the ground loud and proud.

"These streets are our own,

"And my heart will leave you never

"My blood will forever,run through the stone."

Outstanding work from one who's very much one of our own.

Anyway best get to West Ham!

BUY THE GOONER FANZINE AND HELP KEEP US ALIVE