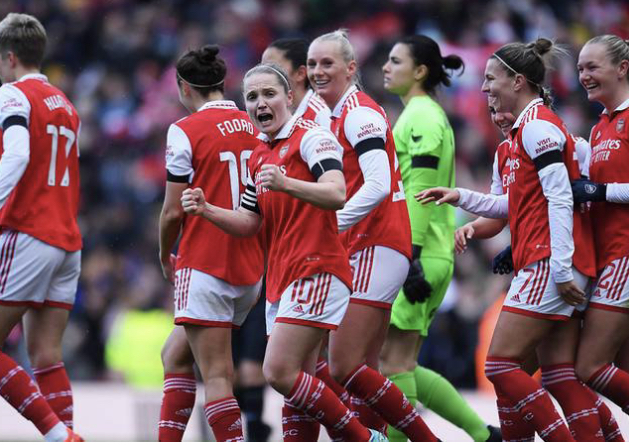 1. Arsenal cannot replace Mead and Miedema, but they have to cope without them.

The Gunners ultimately lacked the end product that their two injured towards so often provide, and whilst creating plenty of chances- especially in the first half- Arsenal just didn’t display the ruthless touch that was required against a top side. Caitlin Foord and Lina Hurtig provided a threat out wide, but Stina Blackstenius still doesn’t seem to strike real fear into opposition defences. Only time will tell how Jonas Eidevall’s team will overcome these injury blows.

2. Arsenal have truly made the Emirates their home.

46,811 tickets were sold, including a packed away end, and it was Arsenal who flew out of the blocks, serenaded by a superb crowd to really put Chelsea under pressure in the first half. The Blues rarely play at Stamford Bridge, whereas Arsenal’s players will be getting more and more used to playing in front of these large attendances. It will be interesting to see whether the reverse fixture could be moved from Kingsmeadow to the Bridge- the demand is certainly there.

3. Strike while the iron is hot.

When teams like Chelsea make mistakes, you simply have to take your chances with the title race as tight as it is. The likes of Maanum and Blackstenius enjoyed some excellent opportunities to test the shaky Ze?ira Mušovi? in the first half but weren’t clinical in front of goal. Arsenal broke the deadlock from the penalty spot thanks to Kim Little but passed up some real chances in open play. The more the score line stood at just 1-0 the more Chelsea grew into the game, and Sam Kerr’s well-taken header ended Arsenal’s hopes of restoring parity at the top of the WSL in a game in which they dominated.