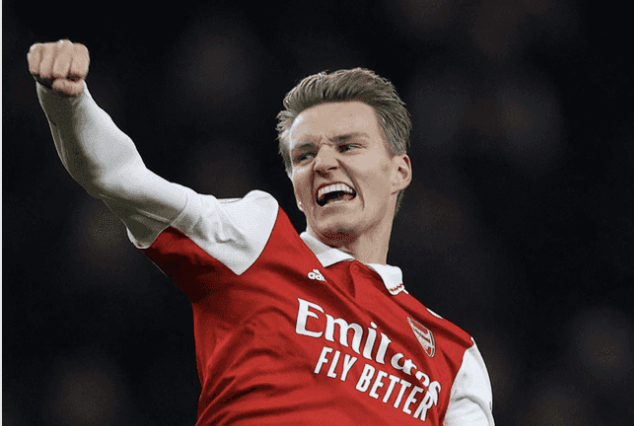 An outstanding performance from Mikel Arteta's gutsy Arsenal side powered the Gunners to victory in the North London derby in a derby full of incident on and off the pitch.

In a dominant display that saw the red and white half of North London emerge victorious to extend their lead at the top of the Premier League table to eight points, Arsenal proved yet again they have the character to go with their undoubted quality.

While the match was sealed by two first half goals - an own goal from Spurs keeper Hugo Lloris and a long-range cracker from Gunners captain Martin Odegaard - there was controversy at the end of the game.

With the temperamental Richarlson tangling with Ramsdale after the final whistle, a fan jumped onto a hoarding and aimed a kick at the Gunners netminder.

Players from both sides then entangled in an ugly melee, before the Arsenal players - in a move reminiscent of the majestic Thierry Henry leading his team to the ecstatic away end following the Invincibles league title win in N17 all those years ago back in 2004 - headed towards their jubilant away fans to celebrate.

To add insult to injury to the hosts at the end, someone with red and white in their veins somehow managed to lob an Arsenal scarf - note, not a half and half effort - onto the overhead camera that swooped around the new White Hart Lane throughout the match.

In truth Arsenal fully deserved their victory, dominating the first half with verve and vigour to ensure they went into the break two goals to the good - after which they showed considerable strength and resilience, not to mention excellent organisation skills to clinch a vitally important victory.

In fact, the match saw the Gunners take the initiative from the start, as witnessed by the busy Lloris saving from Nketiah after intense Arsenal pressure from the top.

On 11 minutes, the influential Thomas Partey headed over Odegaard's free-kick after Romero fouled Nketiah, prior to Lloris saving low to his left to keep out a long-range strike from the talented Norwegian.

Arsenal went ahead on 14 minutes after Eddie Nketiah pressured the Spurs rearguard to help force the ball over the line, following Bukayo Saka's shot that Lloris fumbled, to put Arsenal 1-0 up.

Partey then struck Lloris' post with a thunderous volley that would have been goal of the season had it gone it, as the 3,000 vociferous traveling support gleefully sang to their N17 counterparts: 'You've only come to see The Arsenal."

Sandwiched between those chances, Ramsdale saved superbly well from Huang-Min Son to keep the lead intact.

However, at one stage, Arsenal were in such control, Spurs captain and talisman Harry Kane was forced deep into his own box to supplement defensive colleagues in helping to clear the ball.

The second goal was only a matter of time in coming, and duly arrived with Odegaard's exceptional long-range strike that flew into the net past the despairing dive of Lloris to double the lead and make it 2-0 to Arsenal - as the travelling Gunners fans erupted into jubilant celebrations in the away end.

As if to emphasise their superiority even keeper Ramsdale remained fully alert, blocking Kane's close range effort moments before the interval.

The expected second half storm came, with Ramsdale once again up to the task, first denying the otherwise anonymous Kane with an excellent save, prior to his left foot doing enough to steer the ball past his far post when Ryan Sessegnon powered through into the box.

As the game marched relentlessly on at fever pitch, Lloris threw himself to block Nketiah's close range shot after the Gunners had worked the ball through to their centre-forward.

Yet, as the clock ticked down in this absorbing derby, Arsenal stood firm against Spurs pressure to see out the game.

Next up is the mouth-watering visit of resurgent Manchester United in North London next weekend. No wonder the Premier League is so enthralling. Not least for Arsenal supporters everywhere as they once again proved North London Is Red.